When I was a boy, definitely not yet a teen, I was watching television one weekday afternoon during a vacation from school.  Tom Frandsen was a local Southern California TV host. He had sort of a Brian Keith in Disney's THE PARENT TRAP look about him. The original 1961 THE PARENT TRAP starring the girl I had a crush on, Hayley Mills. Tom Frandsen was a local TV movie host. During a commercial break, he talked about the female star of the movie he was hosting on KNBC TV. He said, "I've always loved the sound of Jean Arthur's voice."  I'd already developed a desire to learn about classic films and their stars at that young age. Mom was in the living room with me and I asked "Mom, who's Jean Arthur?" I could tell by the way Mom smiled when she heard the name that Jean Arthur was a significant talent. I came to love her voice and her talent too, just like Mom and Tom Frandsen did. 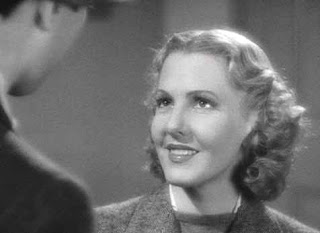 Fast forward to another vacation from school. I was in my early college years. Jean Arthur made a rare guest appearance on TV.  If I recall correctly, it was THE MERV GRIFFIN SHOW. For me, her appearance was like a fascinating film history class. A clip, a strong dramatic clip for Frank Capra's MR. SMITH GOES TO WASHINGTON, was shown. The scene was about new Senator Jeff Smith being urged to continue doing what's right, to continue fighting for the lost cause, to fight political corruption in Washington, DC. When the clip ended, Jean Arthur commented that the film was still relevant "today." This was 1973. During the Nixon Administration and the Watergate scandal. I'd seen stars of classic films talk about their movies in a nostalgic way. But I had never heard one use the essence of a film she/he had starred in to connect to and to underline a current hard news item and social issue. Just like print work and literature by great authors, film has a literature of its own and could remain relevant no matter its age. 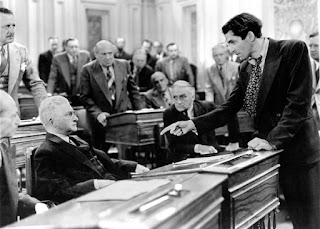 If you've seen 1939's MR. SMITH GOES TO WASHINGTON, starring James Stewart and Jean Arthur, you know the story.  The young senator's late father was a newspaperman, a publisher and editor who believed in a free press and was a champion of lost causes. He couldn't be bribed. He couldn't be intimidated. He took on a syndicate while defending the rights of a laborer. The newspaperman, while working at his desk, was shot in the back and killed.

Sen. Jeff Smith is fighting a political machine out to build a dam in Willet Creek, territory the Senator wants kept pristine for underprivileged kids to enjoy. A corrupt fat cat whose got some senior politicians in his pocket plans to build a Willet Creek Dam. The dam is a fraud. The political machine, which includes one senior politician who had known Jeff's father, is out to discredit and underhandedly expel the young Senator out of Washington. This political machine will physically attack the free press and use its dark weight to circulate "fake news" to give the graft machine more power. This machine will even harm children delivering newspapers that carry the true story. Senator Smith's secretary is the smart, wise and slightly cynical Clarissa Saunders. She's a highly respected Washington insider, especially well-respected by the D.C. press corps. She helps the junior senator evolve from naïve newcomer and disillusioned idealist to political warrior fighting for a lost cause. Saunders will school him in the art of the filibuster.

Today, we seem to have a dark shadow that's even larger than the one Nixon had cast over democracy and the founding principles of our nation. We have a person who wants to build one big long Willet Creek Dam to keep the underprivileged out.

Here's a scene from MR. SMITH GOES TO WASHINGTON. Listen to Jean Arthur.  What she says is still relevant today.
If you have never seen this classic, I highly recommend it.  I also recommend the documentary FIVE CAME BACK. Narrated by Meryl Streep and featuring guest commentators such as Steven Spielberg, Lawrence Kasdan and Guillermo Del Toro, it documents how five classic film directors served in World War 2 and how their service impacted the kind of films they made after the war. It's a fascinating documentary I've watched on Netflix more about three times. The section on when Frank Capra, an immigrant, saw how massive the evil forces of white supremacy were and how it propelled him to use his art to fight Nazism is unforgettable.
at April 15, 2019