Peggy Lee and a Disney Classic

Madonna, Bette Midler and others covered her hits. She was a top vocalist of the 1950s and 60s who was a frequent guest on network music variety shows. She collaborated with Duke Ellington and Quincy Jones. There's much more to her story. She was singer, actress and composer Peggy Lee, a lady who was cool, hip, elegant, sophisticated ...and talented.

Remember the 1988 hit starring Bob Hoskins, WHO FRAMED ROGER RABBIT? One of the highlights of that imaginative live action/animated feature is sexy Jessica Rabbit singing "Why Don't You Do Right"? Peggy Lee sang it back in the 1940s. Just like Frank Sinatra and Doris Day, she was a popular vocalist with a band who was tapped to try acting in Hollywood movies. Just like Frank Sinatra and Doris Day, Peggy Lee went on to become an Oscar nominee for her Hollywood acting skills. Benny Goodman was one of the hottest big band leaders and musicians of the Swing Era.  Here's Peggy Lee when she was the singer with Benny Goodman's band.
Peggy Lee should have pulled off a double play of Oscar nominations for 1955 work. I've blogged before that she was greatly overlooked. I'll repeat why here.  In the 1920s era drama, PETE KELLY'S BLUES, Peggy Lee had the role of the gifted but insecure blues singer whose unhappiness leads her to drink too much. Her boyfriend is physically abusive. When she sings the blues, it comes from a real and weary place in her heart. For her dramatic performance in PETE KELLY'S BLUES, Peggy Lee got an Oscar nomination for Best Supporting Actress of 1955. 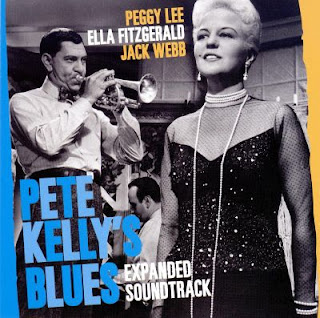 Another 1955 release was Disney's LADY AND THE TRAMP. Please watch that delightful feature again and pay close attention to the memorable songs in it. Peggy Lee co-wrote those songs. "Bella Notte" (This Is The Night), sung during the famous spaghetti dinner date scene, "Peace on Earth," an overlooked tune that needs to be pulled out like a lovely Christmas ornament during the holidays, and the jazzy "He's a Tramp" were all co-written by Peggy Lee with Sonny Burke. Lee also performed voiceover duties for LADY AND THE TRAMP.
"Bella Notte" or "He's a Tramp" should have been an Oscar nominee for Best Song of 1955. Peggy Lee should have had Oscar nominations in two categories -- one for Best Supporting Actress and one for Best Song.

The Oscar winner for Best Song of 1955 was "Love Is a Many Splendored-Thing" from the hit melodrama movie of the same name. Decades later, the song is heard in NUTTY PROFESSOR 2: THE KLUMPS starring Eddie Murphy.

Peggy Lee's talent and creative work supplied a lot of melodic magic to that Disney classic. She helped make it a classic. Now there's some "Women in Film" history for you. 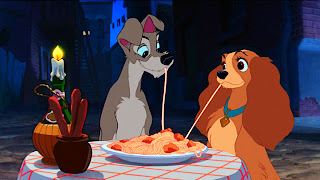