On Jean Harlow in RED DUST

Are you a Jean Harlow fan? If so, I'm going to write something here and I write it with great respect for Ava Gardner, an actress whose work I also loved.  Ava Gardner got a Best Actress Oscar nomination for 1953's MOGAMBO. That adventure/romance set in Africa starred Clark Gable and was a remake of 1932's RED DUST, a hit MGM release that also starred Clark Gable with Jean Harlow in the role later refashioned for Gardner. If Ava Gardner got a Best Actress Oscar nomination for MOGAMBO, Jean Harlow should've definitely received one for RED DUST. With her look as a platinum blonde sex symbol, she truly was a Hollywood icon long before the word "icon" became overused. But she was more than just a sex symbol. Jean Harlow had screen comedy skills that enabled her to steal a scene without even trying. 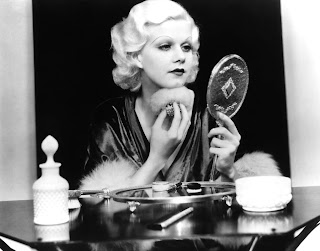 When I was a boy, Jean Harlow's MGM movies aired frequently on our local Los Angeles station, KTTV. The channel was hooked up to the MGM library. If Mom saw that I was watching an old Jean Harlow movie, she'd say "She was your grandmother's favorite actress." Then she go on with a story, a story I'd always love to hear, about how her mother absolutely loved Jean Harlow -- especially when she was opposite Clark Gable. So, in way, watching a Jean Harlow movie gave me a connection to my family history. 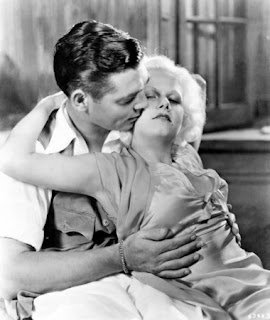 Mom talked about Harlow as an actress. Not as a sex symbol.  However, at that time, the 1930s look was popular and there was huge interest in the late Jean Harlow. If I recall correctly, the Harlow interest was fueled by the Harold Robbins best-seller THE CARPETBAGGERS. The racy book was a roman a clef set in early Hollywood. The blonde sex symbol character Rina Marlowe had a lurid off-screen life and echoes of Jean Harlow in her rise to stardom with the help of a Howard Hughes type. Rina Marlowe = Jean Harlow. Then there was a biography about Jean Harlow that was hot best seller.  HARLOW: AN INTIMATE BIOGRAPHY by Irving Shulman had about 30 photos and was a scandalous, sensational read. My parents had great literature on bookshelf. They also had those two books. When I was in high school, a paperback copy of the Harlow biography was in a box in closet at home. Being a classic film enthusiast by then, I pulled the book out to read. Shulman's biography, I've long felt, robbed attention from Harlow's acting talent and obvious seriousness about her craft. The book's whole section about the frustrating, X-rated honeymoon night following her doomed marriage to Paul Bern (who would later commit suicide) left me, a teen, thinking "How could this 1960s writer know all this about their sexual activity when they were alone together on that night in the 1930s and, according to him, the husband threw away all the sex toys before he killed himself?" I was skeptical.

But...the damage had been done. The popularity of that book and the Hollywood resurgence of interest in Jean Harlow led to two biopics about her being made. One, a Paramount feature in color with Edith Head costumes, starred Carroll Baker. Baker had also played Rina Marlowe in Paramount's adaptation of THE CARPETBAGGERS (1964). The other was lower-budgeted black and white film starring Carol Lynley as Harlow. Judy Garland had begun rehearsals with Lynley as Harlow's mother. Lynley told me that Judy Garland did some very good work for two weeks and then she was off the project. She was replaced by Ginger Rogers. Ginger had replaced Judy in the MGM musical, THE BARKLEYS OF BROADWAY (1949), which reunited Ginger with Fred Astaire.  Both biopics portray Harlow as a beautiful but unfortunate Hollywood character who was used, abused. The biopics, both titled HARLOW, came out in 1965. 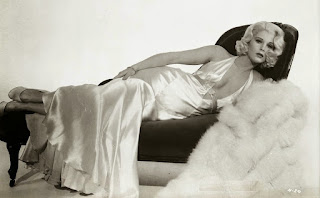 Los Angeles had local and network TV shows. Veteran Hollywood stars would appear on these afternoon entertainment shows, like ART LINKLETTER'S HOUSE PARTY, for interviews. On one had, you had two potboiler books and two not very accurate Hollywood biopics about "tragic blonde sex symbol" Jean Harlow.  On the other hand, people like Ginger Rogers and Rosalind Russell appeared on shows and said that Harlow was one of the kindest, sweetest people they'd ever met, a lovely young woman who went out of her way to help someone down and out, and that's why all Hollywood studios closed and went into mourning the day of her funeral. Jean Harlow's untimely death came at age 26 in 1937. She succumbed to kidney disease.

Back to RED DUST. Harlow plays Vantine and adds new luster and wit to the hooker-with-a-heart-of-gold role. She's a wise-cracking, quick-thinking, motor-mouthed hooker who winds up in Saigon. Decades before Barbra Streisand was a chatty hooker in THE OWL AND THE PUSSYCAT, there was Harlow in 1932's RED DUST. Gable's no-nonsense macho man character just wants to be alone and have a drink. But life has thrown him and Vantine together -- and she won't shut up. She's trying to make small talk. Vantine winds up trying to explain to him how cheese is made. When I was kid, I watched that scene -- a scene my grandmother and mother loved -- and I laughed so hard that my sides ached. I still laugh.
When Jean Harlow's earlier films aired on TV or played at revival theaters, I'd see as many of them as I could. Her visual image and presence were electric and gave you a sweet buzz. You can understand how 1930s moviegoers must have felt. Nevertheless, when you see her as a sophisticated vamp in the 1930 drama HELL'S ANGELS and the 1931 drama THE PUBLIC ENEMY (with James Cagney), there's something a bit stiff in her acting. She breaks through that stiffness and takes off like a rocket when she's allowed to be funny in 1932's RED DUST. She's comedy gold again and finds another dimension to the Blonde Bombshell character as a member of the great cast in George Cukor's 1933 classic, DINNER AT EIGHT.

Still only in her 20s and one of the biggest stars in Hollywood, she's so famous that she can lampoon her own image -- which she does delightfully in 1933's BOMBSHELL, a Hollywood-on-Hollywood comedy. Jean Harlow had three MGM releases for 1933 -- HOLD YOUR MAN co-starring Clark Gable, BOMBSHELL and DINNER AT EIGHT. 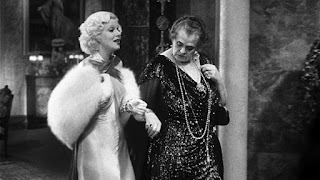 You know the famous last scene of DINNER AT EIGHT with Marie Dressler. Watch how Harlow sets her up for the laugh and never tries to pull focus. Then watch Harlow be lovably ditzy in BOMBSHELL. Years ago, I read an article by an esteemed film historian who felt that machine-gun fast dialogue delivery in comedies pretty much started with Rosalind Russell in 1940's HIS GIRL FRIDAY. Watch 1933's BOMBSHELL. There a madcap scene in Harlow as the movie star gets fed up with the studio and her freeloading relatives. Harlow shines them all off in a monologue on a staircase in her Hollywood home. She gives the monologue an over-the-speed limit delivery seemingly in one breath. It's one of her funniest scenes in a funny movie. Those performances of hers were the result of hard work, professionalism and talent.

The Oscar nominees for Best Actress of 1933 were Katharine Hepburn for MORNING GLORY, May Robson for LADY FOR A DAY and Britain's Diana Wynyard for CAVALCADE. Kate won.

After RED DUST, Jean Harlow should have been a Best Actress Oscar nominee for 1933's DINNER AT EIGHT and BOMBSHELL.  She was more than just a Hollywood sex symbol.