He's a fascinating actor. He's an Oscar-winner. If any actor should put out an exercise and weight loss book like Jane Fonda did, Christian Bale should. He has dropped and gained serious amounts of weight for film roles more than once.  Oscar voters are greatly impressed with weight loss and gain for one's film art.  Look at the Oscar nominations given to Robert De Niro for RAGING BULL, Tom Hanks for CAST AWAY and Matthew McConaughey for THE DALLAS BUYERS CLUB. Bale packed on about 40 pounds to play former Vice President Dick Cheney in VICE directed and written by Adam McKay,  It's a good but not great movie that holds your interest mainly because you can't take your eyes off Christian Bale's Dick.  The actor's transformation and commitment to character is amazing. This is the same British-American actor we saw as Batman in BATMAN BEGINS and THE DARK KNIGHT as the yuppie AMERICAN PSYCHO and as the crack addict ex-boxer who cleans up in THE FIGHTER (Bale's Best Supporting Actor Oscar victory role). We shall see if bulking up brings Christian Bale another Oscar nomination. 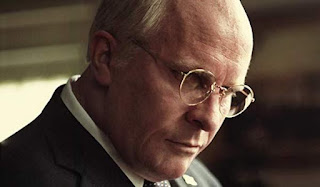 Because I vote in the SAG (Screen Actors Guild) Awards, I had to see VICE.  Otherwise, I probably would've put off viewing it for some weeks even though the cast is filled with actors I like.  But the movie focuses on two political men I have no interest in ever seeing again -- Dick Cheney and Donald Rumsfeld.  Steve Carell plays Rumsfeld.  Here's Bale before (right) and during production (left). 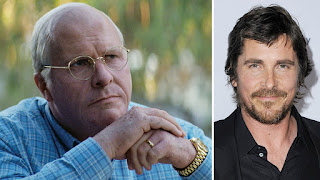 Adam McKay has a great touch for making movies that show the light and dark of male bonding.  You wait to see if the men will grow up and get it together to do the right thing in their jobs.  You see that in his comedies, ANCHORMAN: THE LEGEND OF RON BURGUNDY and TALLADEGA NIGHTS: THE BALLAD OF RICKY BOBBY and you see that in the drama in which Wall Street men bond to warn us of greedy corporate weasels in THE BIG SHORT, Adam McKay's film about the subprime home loan crisis of 2008.

In VICE, we see male bonding in the White House. Also, we see that when mediocrity mixed with white privilege and toxic masculinity is given extreme power, that makes for a political shit-show that will affect all our lives.  The story starts in Casper, Wyoming in 1963. (The same year and in the same territory where two young ranch hands named Ennis Del Mar and Jack Twist will meet, work together and fall in love on BROKEBACK MOUNTAIN.) The opening scene is rowdy. Men getting loud with dice, money and liquor in a saloon.  Then we follow a car driving too fast down a highway with a man pulled over for being drunk behind the wheel. That man is young Dick Cheney.  He's the same man who will be drunk with power in the White House and giving orders on September 11th after one of most horrible, deadly events in American history.

Amy Adams delivers another excellent performance. We saw her with Christian Bale in THE FIGHTER and AMERICAN HUSTLE. Here, she brings her character actress skills to the role of Lynne Cheney. Early in the marriage when he was behaving like an over-aged frat boy, Lynne laid down the law for him to get it together. She was as focused on power and money as a white shark on a stray seal. She elevates Dick from catfish to fellow shark. Lynne cares more about her husband getting power than she does about race/gender equality in American. And they have a lesbian daughter.  In a surprising bit of casting that paid off, Tyler Perry plays Colin Powell and he's quite good. The always dependable Sam Rockwell stars as George W. Bush, the man who chose the monotoned bureaucrat in the White House boys club as his running mate.
There is humor in this film but there are also moments that give you a sick feeling in the gut.  For instance, the scene where the new Dick Cheney guy chats with Donald Rumsfeld while President Richard Nixon is behind closed doors in a meeting. The Vietnam War rages on.  Rumsfeld casually mentions that, in their office, is the power to drop bombs and kill thousands.  You can't help but think of the thousands we lost when we were attacked on September 11th during Cheney's vice-presidency.

For as good as the acting is, the lead character is never someone you can care about. Dick Cheney comes across as a man at war with the world around him. He even seems at war with his own body. He's like Tin Man in THE WIZARD OF OZ, hollow inside but when he gets a heart, it rejects him.  He seems to be heartless -- even after he accidentally shoots a buddy in the face with birdshot pellets during a hunting trip. The buddy recovered. Your jaw drops at the changes made under the Cheney administration that laid some groundwork for where we are now.  In a way, VICE is a cautionary tale that came too late.
at January 05, 2019