Carol Burnett Made Me Cry

The Golden Globes telecast on NBC. Yes, there were a few times when announced winners made me say "Are you kidding me?" but there were also moments that lit me up with joy and gave my heart a sweet flutter -- like TV legend Carol Burnett receiving a special award named in her honor. What an impact she made on the TV arts.  Tears were streaming down my face as she spoke. 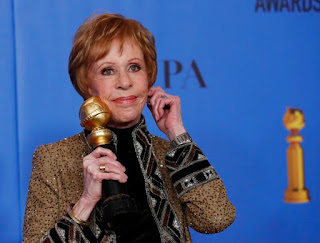 My mother passed away in June of 2017. She was 94. I miss her so very, very much. If I replay many of the favorite times in my life in my mind, its human soundtrack is consistently colored with Mom's full-out, infectious laughter. So much of that laughter came from enjoying THE CAROL BURNETT SHOW. When Carol Burnett's show premiered, watching TV was a family event. We didn't have social media. Families sat together and gave their full attention to a program. THE CAROL BURNETT SHOW made us laugh from when Mom and Dad were married, through their separation and divorce, to high school and college graduations. When life got unpredictable and often heartbreaking, we could always count on THE CAROL BURNETT SHOW to make us laugh.  Mom and I had sort of verbal shorthand when we spoke. We both loved movies and TV and used references to describe a situation of a person. And, for a family that lived in South Central L.A. and then -- in a situation that still seems ripe for sitcom exploration -- relocated to Milwaukee in the late 1970s -- we had show biz moments in our lives.  My first TV appearance was in Hollywood. I was in high school and became the youngest and first black contestant on a classic film trivia quiz show called THE MOVIE GAME. It was a syndicated show.  I won. Mom was in the studio audience and, afterwards, she was truly in awe when she said, "You knew the name of the boat in the movie HIGH SOCIETY."

Carol Burnett attended Hollywood High School. That's where I took my SATs.  To this day, I have no idea why I had to go all the way from South Central L.A. to Hollywood to take my SATs, but I did. Like young Carol Burnett, I adored old movies and TV. I wanted to be an entertainer. I'm sure I was not the only school kid who wrote a fan letter to Carol Burnett that asked for advice. As others also did, I got a letter from Carol Burnett at Television City in Hollywood thanking me for my letter and telling me to stay in school. Mom hoped I'd pick a different profession. It wasn't that she saw me as a non-talented performer. She didn't want me to be disappointed at the lack of equal opportunities solely because of my race. But, when I got my own talk show on VH1 in the late 80s, that was like a childhood dream of mine that came true. In the years after my VH1 time, I did experience the disappointments Mom feared. Racially, the playing field in entertainment hiring and representation was not level. I loved and still love performing on TV. More important to me than stardom was making enough so I could give my single mom a nice life. I was able to help her, but I could never give her the really comfortable life that I longed to thanks to my TV career. My national TV income was …. well, moderate. If was work that I loved but the pay always left me needing a part-time gig to help make ends meet. Doing some kind of TV work that would earn a special place in people's hearts, be found significant and entertaining...that was my dream. It still is.

Mom, who arrived in Southern California for gradate school in her registered nursing career, was well-educated and loved the arts. After Mom and Dad divorced, she refused alimony and was the single working mother of three. Her weekday job was nursing. She needed some extra cash and sought a weekend job. Mom pretended to be way less educated than she was and got a job doing light domestic work for a Hollywood wife. Remember Jack Lord, TV star of the original HAWAII FIVE-O? Before he booked that show, Mom ironed his shirts. Yes. She was hired by Mrs. Jack Lord. When, during some casual chat, Mom went fan-girl on Simone Signoret, enthusiastically recommending her performance in Stanley Kramer's SHIP OF FOOLS, Mrs. Lord figured there was more to this black woman who was putting light starch in her husband's collars. They talked. Mom made cash. The Lords got a new gig and had to move to Hawaii. For the rest of Mom's life, she'd say how much she loved working for Mrs. Jack Lord who later offered Mom a more upscale position. But it would've involved moving.

In Milwaukee, where I started my TV career after graduating from Marquette University, Lena Horne brought her Tony-winning, one-woman Broadway show to town for a week. I attended her press conference. She wanted to know more about me.  Lena Horne later met with Mom and offered her a job. But, that too would've involved moving.

Mom was in an assisted living facility in her last few years. She and I drew so much closer in those years with daily or, at least, weekly phone calls. One time, she whispered "Hold on."  She couldn't speak until the nurse in her room left. When the nurse was gone, Mom squealed, "She walks just like Carol Burnett as Mrs. Wiggins!," followed by her full-out, infectious laugh. Mom referred to and praised Carol Burnett numerous times in our conversations. The memory of those classic sketches Carol Burnett did provided Mom and me with many shared laughs.

That's why I cried. Seeing a clip of Carol Burnett as Mrs. Wiggins brought back a rush of tender memories for me. Mom would've loved Burnett's acceptance speech.

Today's networks, despite how much money they have, would not give us another quality variety show like Carol Burnett's. What she said in her speech, she wrote in detail in this book.  It's a wise and wonderful book with sage comments on today's TV. It's worth reading. 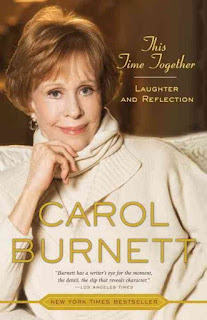 THIS TIME TOGETHER: LAUGHTER AND REFLECTION.  Carol Burnett's show came along at just the right time for us. We wouldn't get that brilliance today. Executives would not give it a greenlight. When I think of Carol Burnett -- and when I think of my mother, one of her most ardent fans -- both those women make me quote Ms. Burnett herself: "I'm so glad we had this time together."
at January 07, 2019