My Love for Julie Andrews

A few days ago, entertainment news outlets online reported that actress Anne Hathaway read a screenplay for THE PRINCESS DIARIES 3. She's eager to do it. Julie Andrews, her costar in the previous two installments, is also eager to do it. THE PRINCESS DIARIES 3 would get my money at the box office in a heartbeat. I love me some Julie Andrews. I have for most of my life. I feel that the Universe knew we needed the Broadway star's radiant light and talent on the big screen and when we needed it.  Her first film, and the film that brought her the Oscar for Best Actress, was Disney's colossal hit, MARY POPPINS. 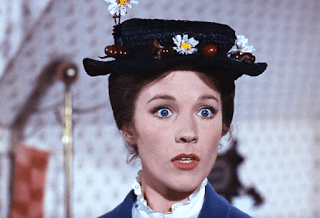 Released in the summer of 1964, her performance as the mysterious nanny in that now classical musical fantasy centered on family love was exactly the tonic America needed to revive and restore us from our four days of shock, horror and national grief in November 1963. Those four days were from the bulletin the President John F. Kennedy had been shot and killed in Dallas, Texas to the President Kennedy's majestic and heartbreakingly unforgettable funeral. MARY POPPINS let us little kids and our parents know that it was alright to smile and laugh again in a world that had grown suddenly dark. In 1965, the healing and light continued. THE SOUND OF MUSIC was released. This family film, a musical, was an enormous box office hit, a hit that brought Julie Andrews her second Oscar nomination for Best Actress. She was definitely a Hollywood star. 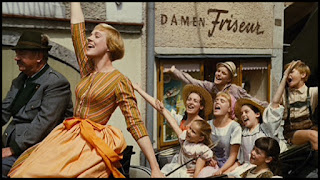 She was still a star in the 1970s but Hollywood and society had changed.  Big screen musicals weren't as popular as they had been. Julie Andrews went to network television. She had a weekend one-hour prime time show on ABC called THE JULIE ANDREWS HOUR. She had all sorts of guests on this music variety show -- while it lasted. You could feel that network executives were determined to bring her image out of Disney and the Austrian alps by showing she could get down with a funky beat.

Back in the early 70s, I saw a behind-the-scenes feature on Julie Andrews tirelessly toiling like a trouper to put that network show over. She was rehearsing a number she'd done in the deluxe Fox flop, 1968's STAR! One the whole, the biopic of famed Broadway star Gertrude Lawrence didn't work but her performance did. On her network show, she made a self-deprecating funny comment about the film's unfortunate box office appeal. During the rehearsal of the complicated song and dance number, she had to do it again. She was obviously exhausted. She said, "Either you want too much or I have too little." Then she got on with it. 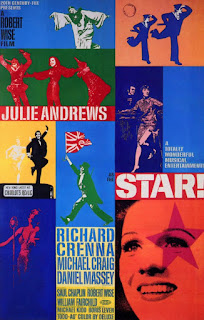 I never forgot that comment of hers. As I grew up and got older, also working in the entertainment business and often rehearsing business for shows that wouldn't click with the public, I found myself repeating that Julie Andrews comment before I got on with it. I've said it quite frequently in the last ten years of job hunting:  "Either you want too much or I have too little."

To me, Dame Julie Andrews is a role model of perseverance.  Here's a sample of her trying to attract new viewers to ABC with a new beat on 1973's THE JULIE ANDREWS HOUR.
The show was canceled. But things turned out just fine for Julie. She went on to show us her saucy screwball comedy skills in a gender bender story that brought her a third Oscar nomination for Best Actress -- Blake Edwards' 1982 hit, VICTOR/VICTORIA. 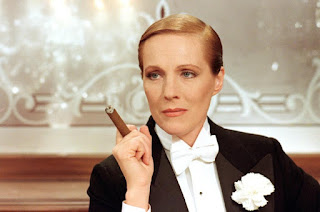 I was lucky enough to meet and interview Julie Andrews once in my career.  I was new to New York City and working of WPIX/Channel 11. There was a junket for the  1986 movie, THAT'S LIFE! All of us in place to interview Dame Julie were a bit nervous. We loved her, but we wondered if we had the proper Buckingham Palace-like manners for her. Before I entered the room for my few interview minutes, the film's publicist pulled me aside and said that I did not have to treat her like she was a prissy, pomp and circumstance lady.

So, with the publicist in the room with us and the cameras rolling, I began with "Miss Andrews, can you confirm or deny a rumor for me? Is it true that you slept with the director and writer of THAT'S LIFE while making the film?"

She let out a hearty belly laugh. The film was written and directed by her husband, Blake Edwards. For those few minutes, Julie Andrews was everything I'd ever hoped she would be. And more.  By the way, her answer to the rumor was "Yes, I did."
at January 26, 2019