First of all, if you have not seen BOHEMIAN RHAPSODY, a biopic about the late Freddie Mercury of Queen, and you heard rave reviews for the performance Rami Malek delivers as Mercury, the reviews were on point. Malek is fabulous as Freddie Mercury. He makes the movie worth watching.  Not that it's a bad movie. It's just that there are times when you think you're watching deleted scenes from THIS IS SPINAL TAP. But BOHEMIAN RHAPSODY does have one of my new favorite trash-with-flash lines from a modern movie. An angry Mercury in the back of a limo shouts at a member of his management team "Get out, you treacherous piss-flap!"  I'd give Malek an Oscar nomination just for keeping a straight face while delivering that line. 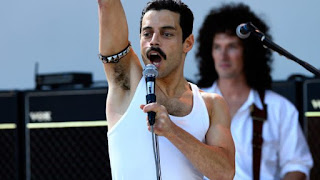 Malek is fitted with fake dental work to resemble Freddie Mercury's protruding front teeth. The poor dear did look like he could've eaten corn on the cob through a picket fence but that marvelous, unique singing voice, his handsome rock star charisma and his sex appeal made the teeth a minor point. Add to that his genius for blending strains of opera and black music into his innovative rock music mixes. Malek nails Mercury's carriage, especially when he's in performance onstage. He has the charisma. And the hair. The men's hairstyles are practically characters in themselves. One actor playing a Queen bandmate looks like he snatched a wig out of the men's dressing room on the set of THE FAVOURITE. 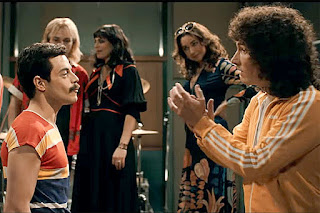 BOHEMIAN RHAPSODY has scenes that already seem familiar from previous theatrical and made-for-TV biopics. There's the outsider child of working class parents. Freddie is the son of immigrant parents -- a loving, passive mother in bland clothing and a disapproving, stern-faced father who made something of himself and wants his son to pursue a white collar job. There's the sweet young girlfriend who realizes the true artistry in the outsider son and the bickering but loyal bandmates. Freddie and his girlfriend have a good sex life.  A half hour into the film, we've seen the girlfriend and met the guys who will all form Queen.  However, I found myself saying "I thought Freddie Mercury was gay."  You don't really get a sense of that until over 40 minutes in BOHEMIAN RHAPSODY. He doesn't even give a lad a quick flirtatious glance. There's a scene at a roadside rest area while the band is on tour dates. Freddie uses a pay phone and a trucker gives him that "sly come-hither stare" as he heads to the men's room. Freddie looks back but doesn't register any lusty interest. Nothing happens. While composing new music in a room, he's kissed by a guy. But he doesn't really respond to that either. Keep in mind that, during these early scenes, he's calling his bandmates and management team guys "Darling" and he sings onstage in flashy outfits that Liza Minnelli would've killed to borrow.  But eventually, as he tours America while the sweet girlfriend is back in the U.K. and as Queen hits it big, he comes out of the closet and gets a new hairstyle.  Of course, with stardom comes conflict.  Also, when a movie character coughs into a handkerchief and sees drops blood, heartbreak will always ensue.
The gay elements are oddly tame for a period in rock music when hormones were shooting off like fireworks at Disneyland. The gay bar scenes look like shots from your standard Madonna videos in the late 80s on MTV and VH1. BOHEMIAN RHAPSODY is rather timid in showing Mercury's life as a gay rock star. We've seen steamier man-to-man love scenes in episodes of HOW TO GET AWAY WITH MURDER on ABC in prime time. My disappointment in a frank representation of a gay male rock star's life reminded me of the line Brian May says in the film: "It's America. They're Puritans in public, perverts in private."

One of the favorite parts of the movie shows the real-life 1975 experience when Freddie coaxed an equally flamboyant radio DJ to play "Bohemian Rhapsody," a song twice the length of the standard record cut that played on radio in those days. "Bohemian Rhapsody" is now a rock classic.  However, the film shows a montage of dreadful reviews it got from print rock music critics at the time.  They were of the "This is crap and you'll never be heard from again" variety.  When I finished watching the screener of the movie Saturday night, I turned on the TV. The NBC show, AMERICA'S GOT TALENT was on and it was a special championship edition. There was a young woman from Spain onstage wearing a cape. She whipped off the cape and launched into a Freddie Mercury medley that dazzled the crowd.

The music segments are good. The Rami Malek performance is excellent. The script is average. If only there had been more trash-with-flash lines like "Get out, you treacherous piss-flap!"
at January 20, 2019