Millennials and a Splash of Marilyn Monroe

It amazes me how the late Marilyn Monroe has become more respected and even more famous since her untimely death in 1962 than she was during her lifetime.  In life, she was internationally famous but not really appreciated as a skilled actress who was also a knock-out in musical numbers. 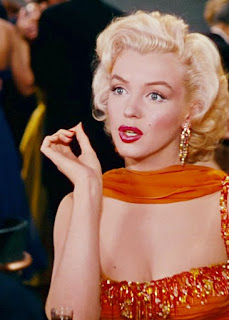 On HBO this week, I saw the Arthur Miller documentary entitled ARTHUR MILLER: WRITER directed by his daughter, Rebecca Miller.  We see and hear the acclaimed playwright.  In interviews, he talks about his late wife, Marilyn Monroe.  We hear her words as she tells about their first meeting, a meeting that occurred when she was a 20th Century Fox newcomer and not a big star.  Miller complimented her on her acting.  He explains his compliment and details the depth and wit of the performance she was giving.  He told her that she should be on the stage.  Marilyn tells us that, when he made that remark, people near them laughed as if it was a light joke.  Miller was serious.  This was a fascinating part of the documentary.  Then, I thought of my interview with actor Lou Gossett, Jr. five years ago.  Gossett and Monroe were in Actors Studio classes together.  She was dating Miller at the time.  Marilyn Monroe asked Lou Gossett to be her scene partner.  He told me that he watched her do work by Tennessee Williams in class. She did scenes from THE ROSE TATTOO and A STREETCAR NAMED DESIRE.  Gossett described her stage acting in class as "brilliant."  He went on to say that, had she lived and if Hollywood had allowed her to do the quality of acting onscreen that she'd done in class, she'd have two Oscars by now.  But, in life, she didn't get much respect from film journalists.  She made headlines as a sex symbol but was not given significance as an actress, as an artist. Damn those entertainment journalists.  She was one of the best comic screen actresses of her day. Her comedy timing in HOW TO MARRY A MILLIONAIRE, GENTLEMEN PREFER BLONDES and SOME LIKE IT HOT is masterful. She's awed and influenced other artists from Arthur Miller to Norman Mailer to Madonna.  Today, she still has an influence over our pop culture. Last night, I saw a photo from a new movie that comes out in a few months and I immediately thought, "The director has the actress doing a Marilyn Monroe bit." 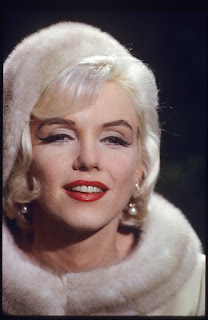 Monroe's last completed film was a drama, THE MISFITS, with a 1961 dramatic screenplay written by Arthur Miller.  The two divorced after the film's completion.  Marilyn had dropped about 15 pounds and looked absolutely sensational as she started work on her colorful next project. 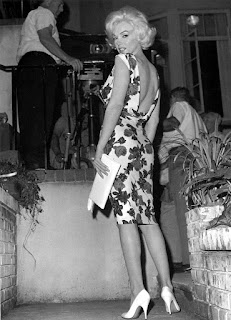 She'd started work on a new 20th Century Fox comedy co-starring Dean Martin.  Noted director George Cukor was directing them in SOMETHING'S GOT TO GIVE. 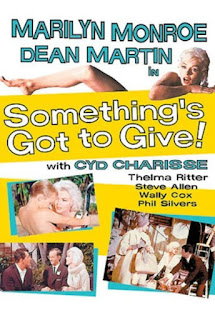 This 1962 shoot was a remake of the popular screwball comedy starring Irene Dunne and Cary Grant called MY FAVORITE WIFE (1940).  Marilyn Monroe, who had a keen sense of self-promotion, shoots a tastefully nude swimming pool scene. 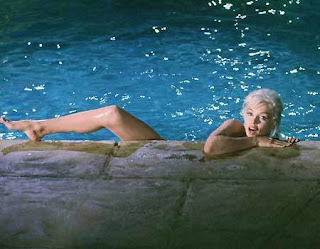 Of course, pics of this shoot made magazine covers and had male hormone in 1962 spinning like they were in those giant teacups at Disneyland. 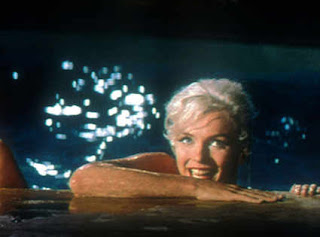 UNDER THE SILVER LAKE, directed by David Robert Mitchell, stars Andrew Garfield and seems to be sort of "millennial noir."  The modern-day takes place in Los Angeles. A young dude becomes obsessed with the mysterious disappearance of his beautiful blonde neighbor.  She likes to the use the apartment complex swimming pool. 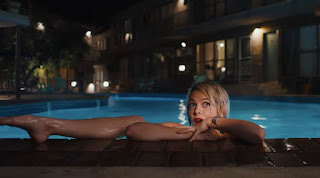 See the Monroe influence?  Here's a trailer for UNDER THE SILVER LAKE.
It opens this year, June 22nd.

Marilyn Monroe died during production of SOMETHING'S GOT TO GIVE.  Again she made headlines and magazine covers. She was 36.  The project was shelved and then repackaged with a new cast and crew.  It becomes a hit Doris Day and James Garner comedy called MOVE OVER, DARLING (1963).  Doris Day's character even makes mention of the Irene Dunne and Cary Grant original film.  In the story, a wife gets lost on a tropical island (like Tom Hanks in CAST AWAY) and is presumed dead after seven years. The husband is on the verge of remarrying.  He's engaged to a highbrow bore when his first love is found and returns home.  She's determined to prove that she's very much alive and wants to marry him again.

Clever Monroe fans and film enthusiasts took the SOMETHING'S GOT TO GIVE footage in assembled it into a short version of what the late Hollywood legend's first role as a wife and mom could've been.