Yes, here's another one of my rants about the lack of gender and race diversity in the field of film journalism we've had over the decades.  Couple that with how some Hollywood history was overlooked when reviews were written recently about A WRINKLE IN TIME's remarkable director, Ava DuVernay.  Let me tell you right up front that I grew up in South Central L.A.  I believe she did too. We're of different generations but, I'm sure, some of the same things applied.  Back in those days when Sidney Poitier was a top box office star and the Oscars ceremony had relocated from Santa Monica to downtown's L.A. Music Center, you did not see black people on TV doing film reviews.  Black folks were not film critics in publications like THE LOS ANGELES TIMES.  Only white broadcasters and white writers held those jobs.  I was a film geek.  When I was a student at Verbum Dei High School in Watts, I pretty much pushed myself into audition consideration to be a contestant on a classic film trivia TV quiz show called THE MOVIE GAME.  I made the cut.  It shot in Hollywood.  I was the first African American contestant and, at the time, the youngest.  Mom sat in the audience.  She watched me become the show's youngest and first African American winner.  However, for someone to grow up in South Central L.A. with dreams of making films that would be released by a top Hollywood studio...well, that was pretty much an impossible dream.  The odds were against you.  The odds were against me going to New York City and getting my own prime time celebrity talk show on national TV.  But I did it.  And Ava DuVernay made a fantasy film that was released by Disney.  Brava, Ava! 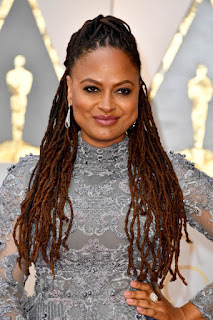 The late, great Pulitzer Prize winning film critic Roger Ebert saw greatness in Ava DuVernay.  I first heard of her through him.  Watch the moving documentary about him, LIFE ITSELF (2014).  Ava appears in it.  Several film critics appear in.  Not a one is black.  Late last year, HBO premiered SPIELBERG, a documentary about Steven Spielberg.  About a half dozen film critics appear in that.  Not a one is black.  Remember when AMC was American Movie Classics and host presented classic films?  All the regular hosts were white males.  Turner Classic Movies now has four hosts.  Four white hosts.

There same frustrations African American filmmakers have felt when Hollywood declared "Black films aren't marketable and don't make money overseas" has been and is felt by those of us who worked the entertainment news side and pushed to do reports on filmmakers and actors of color who were not getting mainstream attention.  We also hit a color wall.  We pushed to do film reviews in the studio but were denied the opportunities.  So...predominantly white guys on network TV news programs and syndicated entertainment news shows told us why we should see THE COLOR PURPLE, BOYZ N THE HOOD, THE HELP, THE BUTLER and 12 YEARS A SLAVE.  I ran into Rex Reed at a News York City film screening.  He saw 12 YEARS A SLAVE and then went on a 4-week paid vacation overseas.  In my entire life, I have never known a black person who got 4 consecutive weeks of paid vacation. By the way, Rex did not understand and hated GET OUT.

Back in the 80s and 90s when weekend box office receipts became part of the local and network news reports, we'd hear about the Top 5 movies at the weekend box office.  To be in the Top 3 was an admirable achievement.

Black history was made in 2015.  F. Gary Gray, a black director, gave us the critically acclaimed STRAIGHT OUTTA COMPTON.  Not only did respected national critics rave about this film, it was number one at the box office for three consecutive weeks.  A film from Universal directed by a black director.  AND... it was making money overseas.  However, the TODAY Show on NBC/Universal, gave way more attention to TRAINWRECK, JURASSIC WORLD and the animated MINIONS, all three also from Universal.  Stars visited for studio interviews. The TODAY Show had no features on STRAIGHT OUTTA COMPTON and never even mentioned the Black Hollywood history it made at the box office.  And Matt Lauer, then with TODAY, is seen in Universal's STRAIGHT OUTTA COMPTON.  After my VH1 years, when I worked at WNBC and did entertainment reports on a local news program, publicists still remembered me from VH1 and offered me clients to interview in studio.  I was offered in-studio interviews of three performers -- singer Dianne Reeves, singer Patti LaBelle and actress Pam Grier.  My white executive producer declined the invites saying, "They're not our audience." I soon realized that was the same as "Black films don't sell overseas."  Our news anchor, however, did get to book a live in-studio interview of Pia Zadora.

January 2017.  Chris Connelly and Jess Cagle, two very nice white gentlemen who are entertainment journalists with high profile jobs, were on GOOD MORNING AMERICA awaiting the Oscar nominations to be announced. They wondered if black actors would be in the running because of the "Oscars So White" issue. Viola Davis was announced as a Best Supporting Actress nominee for FENCES.  Neither Jess nor Chris knew or mentioned that Viola Davis had just become the most Oscar-nominated Black actress in all 89 years of Oscar history. It was her third nomination. Jess and Chris talked about Meryl Streep.  My point -- our Black History in the Hollywood industry should be acknowledged.

This year. director/writer Ryan Coogler rocked Hollywood with his box office blockbuster, BLACK PANTHER.  A film with a predominantly black cast that was written and directed by a black man was number one at the box office and has hit the $1 billion mark in worldwide box office.  Coogler's Marvel Comics-based action/adventure has become a pop culture phenomenon. 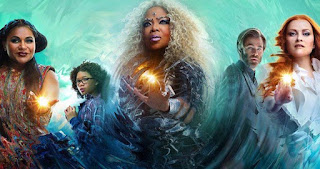 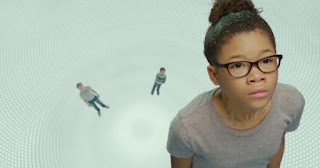 When I was a kid, I won tickets to see a preview of the sci-fi fantasy thriller FANTASTIC VOYAGE.  Mom, my sister and I saw on the 20th Century Fox lot.  Mainstream American may not have known it but I knew that Raquel Welch is Mexican-American.  Our next door neighbors were Mexican-American.  I had Chicano classmates, teachers, priests and friends.  Raquel Welch represented the world that I knew -- and she played a scientist in the movie!  That was so cool and so significant to young me.  Just like seeing Sidney Poitier, Ruby Dee and Harry Belafonte on the big screen.

History was made at the box office last weekend.  I cannot remember in my lifetime of hearing entertainment news reports when the Number One and Number Two films at the weekend box office were directed by African American filmmakers.  And one of them is a woman!  BLACK PANTHER came in tops again, followed by A WRINKLE IN TIME.  This was a major achievement for Women In Film and Black History in Hollywood.  However, THE HOLLYWOOD REPORTER called Ava's number 2 spot a "disappointment" because she didn't top BLACK PANTHER.  I read a couple of lackluster reviews from middle-aged white male critics who apparently watched A WRINKLE IN TIME through the prism of middle-aged white manhood.

There was no consideration for of acknowledgment of the fact that young black and Latina girls all over the country might be looking at the same film with wonder and delight.  Until last weekend, those girls have seen Cineplex screens dominated by white male superheroes.  In fact, A WRINKLE IN TIME could be a film that inspires some of them to seek a career in the film business.  Ava's film could be delighting future directors, screenwriters, cinematographers, actresses -- and film journalists.  In short, it could inspire their dreams the way a fantasy film like FANTASTIC VOYAGE did mine.

In the late 80s, Raquel Welch was a most fabulous guest on my VH1 talk show.

This is a reason why the field of film critics is in great need of some race and gender diversity.  I wish I was on a TV show where I could say the things I've put in this blog post.

Ava DuVernay, I believe, is the only African American woman who directed a film that was an Oscar nominee for Best Picture.  Black History, Women In Film History, Hollywood History.

Ava DuVernay is one of the very few African American women who directed a film that was in the Top 3 of the weekend box office.  Black History, Women In Film History, Hollywood History.

But for her fantasy film to come in at No. 2, in the eyes of some white film journalists, is a disappointment.  Given the long, long, long history of racial exclusion and the lack of equal opportunities in Hollywood, they should be praising the fact that she got the movie made instead of writing that it made "only" $33 million. In its first weekend.

I have not seen Ava DuVernay's A WRINKLE IN TIME but I plan to.  I am proud of her -- and very proud that she's from South Central L.A.  I feel some of the recent print reviews about her new film ignored the historical big picture.  Ms. DuVernay deserves more respect for her accomplishments.  Just my opinion.