Happy Easter! May your spirit feel reborn and refreshed.  May a big basket of tasty goodness be waiting for you to enjoy.  As you know, I am passionate about diversity and inclusion in the entertainment business -- films and television.  I've been a devoted TCM fan since 1999.  However, there have been times in the last couple of years when TCM has been like that good buddy to whom you occasionally must say, "Duh! Seriously?"  I felt that way early Saturday when I watched the network.  Saturdays are now TARZAN day at 10a ET. 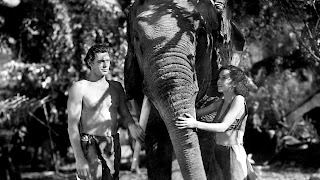 Today was the third consecutive Saturday I saw Congo natives carrying some white British guy's luggage on their heads while they called him "Bwana."  Some were shot and killed because they didn't want to carry his luggage on their heads.  Others were tossed off a high mountain cliff like ragdolls by wild gorillas.  The other Congo natives were bad.  Basically, African images came in two categories -- slaves or savages.  And some of those greedy white hunters worked Tarzan's last good nerve too.

Are there any black execs in the TCM programming room?  They've got 4 TCM hosts -- senior host Ben Mankiewicz, Eddie Muller, Dave Karger and Alicia Malone.  There are 5 hosts if you count the occasionally seen Disney expert, Leonard Maltin.  All Caucasian.

Ben Mankiewicz is a lovely, lovely man whose work I have enjoyed for years. You can always count on Ben Mankiewicz to bring up the importance of racial equality.  He did that in April of last year on the TCM Film Festival red carpet in Hollywood when the race drama/murder mystery IN THE HEAT OF THE NIGHT received a 50th anniversary screening with star Sidney Poitier and Lee, director Norman Jewison, and producer Walter Mirisch in attendance.  Ben posed a question on the red carpet about the relevance of IN THE HEAT OF THE NIGHT today in this age of "Black Lives Matter."  Ben warned folks that BREAKFAST AT TIFFANY'S contained Mickey Rooney's ethnic stereotype performance as an Asian upstairs neighbor.  I wish pianist/singer Michael Feinstein had taken a tip from Ben Mankiewicz late last December when he was guest host.  Feinstein introduced THE DOLLY SISTERS starring Betty Grable and June Haver.  He told the audience to look for the lavish, surreal costumes in the "Lipstick, Powder and Rouge" number.

I sat on my couch and thought, "You should prepare them for "The Darktown Strutters' Ball." That production number had shapely showgirls and poor Betty Grable all in blackface.  And Betty was not only in blackface, she was dressed as a pickaninny. So was June Haver.  You need to warn folks about stuff like that.  There have been other blackface numbers seen in other classic movies that have aired since THE DOLLY SISTERS.

In a way, the TCM host group is like a 1930s Hollywood movie that has lead characters talking about the importance of racial equality -- but the movie has an all-white cast.  There's no black representation in segments in between the movies.  We didn't even see a black guest co-host in prime time on Dr. Martin Luther King Day a few months ago when TCM salute African American filmmakers.

I love Bing Crosby musical comedies and his powerful dramatic skills, as in 1954's THE COUNTRY GIRL, just knock me out.  However, as much as Bing loved and respected Black music and artists, Bing was late getting the memo to "Nix the blackface numbers." 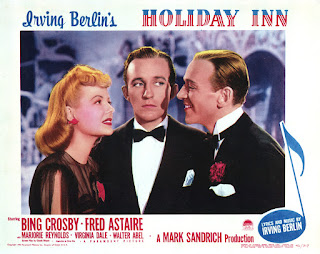 On Easter Sunday night, TCM follows the 8p ET airing of Irving Berlin's EASTER PARADE starring Fred Astaire and Judy Garland with Irving Berlin's HOLIDAY INN starring Fred Astaire and Bing Crosby.  Bing sings "Easter Parade" in this movie and introduced a new song called "White Christmas." It would win the Oscar for Best Song and become one of Bing's signature tunes.  This was made back when George Washington's birthday and Abraham Lincoln's birthday was separate federal holidays and not rolled into one Presidents' Day the way they are now.  For Abe's birthday, Bing slaps on the blackface to sing "Abraham."  In it, Louise Beavers, as the Holiday Inn maid, sings a line about the man "...who helped to set the darkies free."

So be prepared.  While Bing sings, poor Marjorie Reynolds is also in blackface -- and dressed as a pickaninny.

Here's a note about the classic MGM musical: 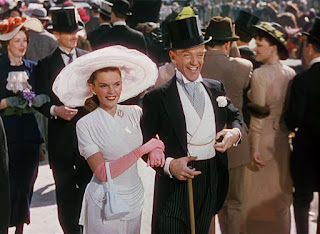 There is a terrific Black female dancer in EASTER PARADE.  Unfortunately, she didn't get to dance. She played the maid to Ann Miller's character.  Jeni LeGon was her name.  As did many Black female actresses in Hollywood during that time, she played a lot of maids. Her color limited the amount and quality of work she got in Hollywood.  She did get to dance in a few films.  In 1935's HOORAY FOR LOVE, she danced with the famous Bill "Bojangles" Robinson.
Jeni LeGon had a knockout of a tap number in 1937's fantasy musical ALI BABA GOES TO TOWN starring Eddie Cantor.  She had sweet little number with Betty Hutton in 1952's SOMEBODY LOVES ME.

Hollywood frustrated Jeni LeGon.  She relocated to Canada in 1969 and, there, she became a highly respected and popular dance teacher/coach.  She died in 2012 at age 96.