I have been a Doris Day fan ever since I was kid.  Her old movies were shown frequently on local TV and AM radio stations were still playing her records.  In my VH1 veejay years of the late 80s, it really hit me what a phenomenon in the entertainment business she was.  Doris Day, as you probably know, was a hit vocalist during the World War 2 years.  She sang with a band.  Then she did popular radio show appearances.  Then Hollywood gave her a big break in 1948.  Reportedly, Warner Bros had planned ROMANCE ON THE HIGH SEAS as a vehicle for Betty Hutton.  Hutton, at the time, was a top Paramount star.  Well, Warner Bros. didn't get Hutton and took a chance on singer Doris Day, a talent who could sing and dance yet never had any acting training.  Well, she proved to be a natural in the last category.  Day became a big, new star on the Warner Bros. lot. 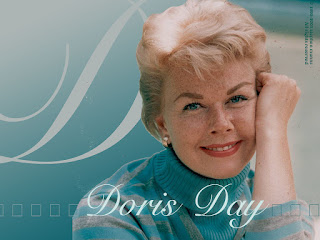 She was on the studio's assembly line of musicals.  Not all of them became true classics like a MEET ME IN ST. LOUIS, SINGIN' IN THE RAIN or THE BAND WAGON, but they were entertaining.  One thing to notice now is what a really good dancer Doris Day was. Look at her dancing with Gene Nelson in TEA FOR TWO (1950) and LULLABY OF BROADWAY (1951).  She was a newcomer in 1948.  By 1953,  her name was above the title for the original musical western, CALAMITY JANE. That has another display of her solid dancing skills.  Also, she introduced "Secret Love."  Another hit record for her and a tune that won the Oscar for Best Song.  It seems to have been Doris Day's destiny to be a top Hollywood movie star.
With her spunky, independent girl next door image as a starter, she advanced to more serious fare that showed her impressive dramatic talent.  She had serious scenes with Frank Sinatra in YOUNG AT HEART, she should've nabbed a Best Actress Oscar nomination for her performance as an ambitious, manipulative singer (Ruth Etting) in the drama biopic LOVE ME OR LEAVE ME co-starring James Cagney and there's her dramatic work as the mother of a little boy who's been kidnapped during a family vacation overseas in Hitchcock's THE MAN WHO KNEW TOO MUCH. That gave her another future Best Song Oscar winner to introduce.  "Que Será, Será" became Day's signature tune. 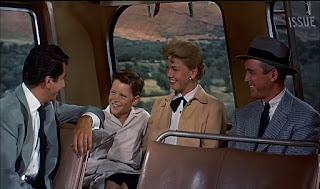 By the 1960s, thanks to her bright romantic comedies with Rock Hudson (PILLOW TALK brought her a Best Actress Oscar nomination), she had truly become a Hollywood movie icon,  Icon is a word greatly overused today but, in her case, it applied.  Doris Day's image symbolized a certain kind of bright entertainment to audiences all over the world. 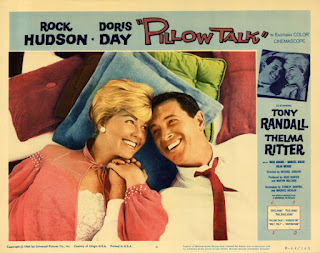 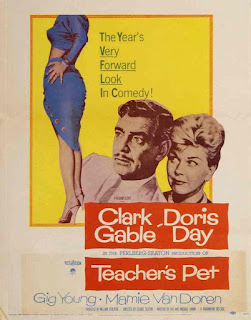 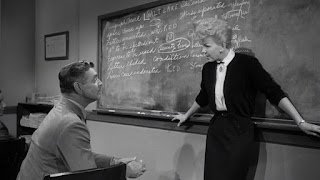 Doris Day was a triple threat Hollywood star -- like Judy Garland.  Doris Day could sing, dance and act.  Both were Oscar nominees in the Best Actress category.  It's not such a practice anymore but, when Doris was making movies like THE MAN WHO KNEW TOO MUCH, TEACHER'S PET, PILLOW TALK and PLEASE DON'T EAT THE DAISIES ... she sang title tunes written for the film and/or songs written for her to perform in the story.  Doris Day had hit records on the Billboard charts and made hit movies that made her a Top Ten box office star.  In VH1 days, pop superstars like Madonna and Cher couldn't quite pull that same achievement off to the extent that Doris Day did.  And there's a hip embrace of diversity and inclusion in her biography.  Her girlhood idol and inspiration to sing was Ella Fitzgerald. In the 1950s, he widowed father remarried.  His new wife was a Black woman.  Doris, in her memoir, told that she had a blast at that wedding reception.  I bet the studio wanted her to keep hush-hush about that.  Years later, a couple of tongues were wagging that she was having an affair with...Sly Stone of Sly & the Family Stone.  They weren't having an affair.  He was meeting with Doris Day for permission to record a cover of "Que Será, Será."

Doris Day went on to star in a hit CBS sitcom.

Now... about her defiance.  The early years of the AIDS crisis were dark, brutal years in which anger and ignorance reigned.  There was anger from our gay community at the Reagan Administration for not acknowledging the epidemic and doing something to fight it.  As far as the ignorance, AIDS was the new leprosy.  People did not want to touch you if they knew you were HIV positive.  NEW YORK MAGAZINE had a major article in which it was noted that expensive people who were regulars as posh East Side Manhattan restaurants stopped being regulars.  Why?  They assumed that all male waiters were gay, all gay men had the AIDS virus and they could transmit it to you by touching your food plate and silverware.  That's how some educated people thought and reacted.  The 1980s were like Medieval times.  A book publicist friend of mine who worked for a top publishing house in New York City had seen some of this ignorance play out at swanky cocktail parties.  He noticed that people would get visibly nervous if someone gay or even assumed to be gay simply sneezed.

Compassion and education -- and medical attention -- were needed.  To me, female Oscar nominees charged forward with the quality of compassion that, well...frankly, President Reagan did not.  There was, of course, 2-time Best Actress Oscar winner Elizabeth Taylor.  There was also another woman who'd been Rock Hudson's leading lady -- Doris Day.

Rock Hudson, after his big movie star days had lessened. went on to years of success and more popularity on NBC in the 1970s.  In 1984, he was added to the cast of DYNASTY.  There, a change in his appearance had been noticed. Reportedly, one actress did not want to do a love scene with him.
Hudson, who'd kept private about being a gay man, had been diagnosed with AIDS and the revelation of his illness in the news gave a famous face to the disease.

After her CBS sitcom years, Doris Day had a chat show that she taped where she lived.  In the Carmel, California area.  She did an episode with her longtime friend and famous co-star, the now-ailing Rock Hudson.  Whereas some folks in America were so misinformed that they thought that simply being up close to a person with AIDS could infect them, there was Doris Day to make you feel like a coward.  We saw the defiance and strength of her sunny disposition image in those dark years when she hugged and kissed her terminally ill friend in public.  Cameras were rolling.  I'm sure Hollywood knew about Hudson's condition before it was made public.  A fellow you'll see giving a short soundbite in this piece is Doris' noted record producer son, the late Terry Melcher. Rock Hudson died in 1985 at age 59.
I've long been a fan of Doris Day movies and records.  But this defiance and sweet devotion of hers in public to a plague-stricken friend always made me love her even more.  It was an example of how we all should behave.