Chris Hemsworth is the star of IN THE HEART OF THE SEA.  He's big, he's butch, he's blond.  He battles a colossal fish during a dangerous voyage for whale oil that inspires a young man to write a thick famous novel called Moby Dick. 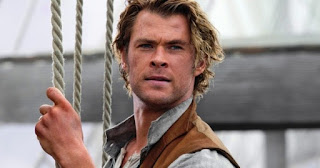 I'm really glad that I saw this movie by myself.  If I had taken a date, I would've been sitting in my seat thinking "Aw, man, I should've taken him to see Daniel Craig in Spectre instead.  This is kinda flat."  Hemsworth has worked with Ron Howard before in a much better movie.  Rush, a 2013 release based on real life characters in the world of sportscar racing, was a fine and exciting film that critics loved but moviegoers overlooked.  Rush is very good.  In The Heart Of The Sea needed more of a pulse.  It's pretty lifeless in some  spots.  Hemsworth is basically beefcake hero eye candy in this film.  You're not really sure what point the screenplay wants to make.  Hemsworth plays Chase, a working class man with a pretty wife and a cute, little child.  It's 1850 in Nantucket. 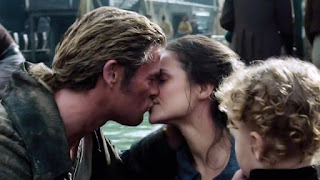 He's takes a job on a voyage to bring back whale oil.  That means the seamen will catch a whale, cut it open and extract the valuable whale oil.  The voyage will be dangerous but we know Chase will return.  His wife says "Come back to me."  She's lovely, he's handsome and they're both white.  So you just know they'll be together again.  When he gets his orders before boarding ship, there's conflict between Chase and some corporate types greenlighting this voyage.  In those scenes, you wonder if director Ron Howard is making a statement on September 11th America and the Bush Administration with its members like Donald Rumsfeld and Dick Cheney.  Within two weeks after those attacks here in New York City, there were candlelight marches.  I remember hearing New Yorkers who carried candles to pray for peace say "This was all about oil."  Many of them remarked that the attacks were all about oil.

Chase feels his corporate board needs to consider the lives of the men -- and one boy -- and consider the consequences of such a hunger for oil for profit.  As it is, the men on the ship are sent out in search of whale oil, something goes horribly wrong, and they're attacked by a monstrous entity.  They survive a disaster of epic proportions. 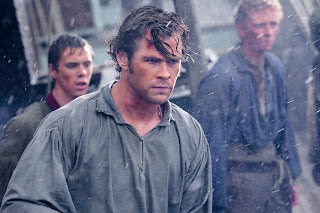 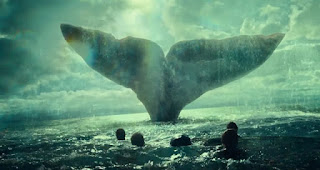 So you've got that angle which struck me as allegory for modern political times in America.  But, before that, a young man seeks an older married man.  The sad, somewhat boozy middle-aged man was on The Essex in his younger days.  That was the ship sunk by a giant white whale.  He's never really told all about the voyage.  His wife wants him to open up to the young man.  The young man is Herman Melville and he pretty much describes himself as a mediocre writer.  We get the story told in flashback, the story that inspires young Melville to write a work of fiction called Moby Dick.  He seems as obsessed with writing that book as Ahab was with killing the enormous fish.

Then we're back on the ship after the boozy middle-aged man says "This is the story of two men."  The two men are the veteran whaler, Chase, and the ship's unpopular captain, Pollard.  Rush was also the story of two men, rivals in the glamorous 1970s field of Formula One racing.  But that movie had a better, more focused script.  There's the sea voyage, Chase and Captain Pollard disagree, standard-size whales are caught and cut open for their oil.  Dreamy-eyed Cillian Murphy (at far left in the photo) plays a shipmate who looks dreamy-eyed.  Benjamin Walker (middle) plays the captain. 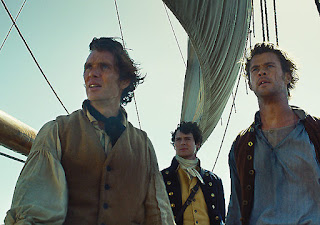 We know the monster whale will appear -- and not a moment to soon.  This movie needs action and it felt like that Moby Dick-sized fish doesn't really show up until the second hour.  That's when the film picks up a bit.  And another thing -- I like Chris Hemsworth.  He's proven his movie star appeal as Thor in the Marvel Comics-fueled action movies. 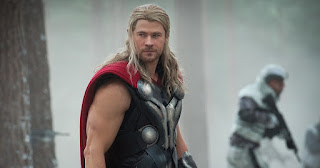 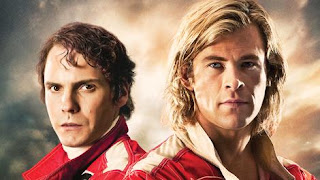 Howard got a good dramatic performance out of him as the playboy competitive sportscar driver in Rush.  But in this movie, there's something very Southern California about the way he plays a man out of 1850's Nantucket.  You keep expecting him to shout a line like "Dude!  That was a big mother-phukkin' fish!  Did you see that?!?!"  Here's a trailer for Ron Howard's In The Heart Of The Sea.
That greedy corporate board does not want Chase to reveal the horrors the crew of The Essex experienced at sea.  The board wants no mention of the great white whale because it could lessen earnings.  Chase responds, "You want me to whitewash what happened for profit?"  That was another line that made me think Howard was making a statement on our government at the time of the September 11th attacks and the wars that followed.  Or is this the tale of a young writer who finally finds his real voice? Or is this mainly a big, soggy Chris Hemsworth action movie?  In The Heart Of The Sea needed something else to heat up all that water.  Maybe if Hemsworth had been shirtless or given us a full rear view while naked in a shower, that would've helped.  Maybe if that gigantic whale had come in earlier with the action.  The movie isn't bad, just surprisingly average.  That's because of the not fully realized script.  You never know what the heart of In The Heart Of The Sea really is. And you wind up disappointed.  That huge Dick and so little action.  Howard and Hemsworth gave us much better results in Rush. Rent that one.
at December 15, 2015