Broadway's FIDDLER ON THE ROOF

I am in awe of Danny Burstein, Broadway's new star of FIDDLER ON THE ROOF .  He's a triple threat talent.  He can act, sing and dance.  He's also got the comedy gift.  He's the quality of talent that, decades ago, would've been working on TV with Sid Caesar in Your Show of Shows, playing a character in a Peter Bogdanovich classic like What's Up, Doc? or Mel Brooks' Young Frankenstein or he'd have been a stand-out featured player in episodes of The Mary Tyler Moore Show and The Bob Newhart Show.  Danny Burstein can be hysterically funny, however he also does the actor's work and will delve into the dark side of character -- that side that may not be likable but it's human and  revealing.  It's the truth of the character and, in a way, of ourselves.  That's what I loved about his portrayal of Tevye, the poor Jewish milkman in Russia with five daughters and a proper wife of 25 years in Fiddler on the Roof. 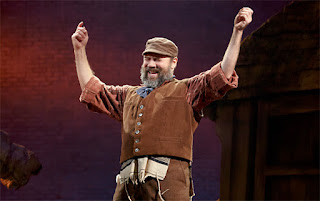 Fiddler on the Roof premiered on Broadway 1964 and was a huge success.  Songs from the score were recorded by top vocalists of the day.  Zero Mostel was the star and he had a larger than life presence.  You can tell that about Mostel if you've seen him in the Mel Brooks comedy movie, The Producers.  I pretty much grew up hearing the Broadway soundtrack on radio.  I saw the fine 1971 Norman Jewison movie adaptation starring Topol.  I saw the previous Broadway revivals.  I saw Alfred Molina on Broadway on Tevye, I saw Harvey Fierstein as Tevye.  With Danny Burstein in this production, I felt as though I was seeing it for the first time.  What a remarkable performance.  He brings you into Tevye's life, heart and soul.  He connects you to his journey. 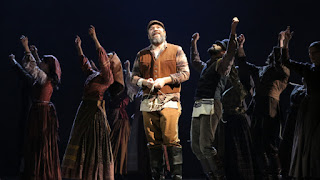 This show is about tradition (one of the hit songs from the score is called "Tradition"), culture and culture clashes.  The Jews in this story are outsiders in their homeland because of bigotry.

"Do You Love Me?" is one of the most famous songs from the Fiddler on the Roof score.  I've seen the movie more than once.  I saw the previous Broadway revival.  I never got tears in my eyes during that number until I experienced Danny Burstein doing it.

The "Tevye's Dream" scene is another highlight.  Tevye is sweetly manipulative here, conning his wife that a dead relative came to him in a dream with a message about their daughter's engagement.  I've seen Danny onstge in three Broadway musicals.  That number crystallizes one of the things that makes him a master as his craft.  There's high comedy in the number.  He's physically more limber than Mostel probably was in the original cast.  And he's more limber than Alfred Molina and Harvey Fierstein were.  Danny gives Tevye a touch of Groucho Marx in "Tevye's Dream" as he wears nightclothes in bed with Golde, his wife.  He reminded me of Groucho in 1933's Duck Soup. 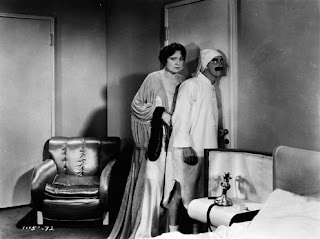 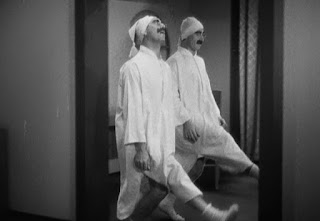 Burstein moves comically.  But he never takes the comedy so far that it eclipses the character.  He doesn't overdo it.  He gets the laughs and remains truthful to the character.

Maybe because I'm older now, but I never realized how much separation there is in Fiddler on the Roof.  Children separate from parents.  People separate from the strict confines of religious and cultural tradition.   Jews are forced to separate from their homes and from their land.  The play opens with the lively and mirthful "Tradition" number.  Traditions and customs are celebrated.  Later, we see the dark side of the bright number.  One daughter has fallen in love with man not of her roots.  He's not a Jew.  This causes a heartbreaking and angry rift in her family.  Keep in mind this action takes place in 1905.  When I got to New York City in 1985, I worked at a local TV station.  Three of us on a morning show staff were chatting about relationships during our lunch break.  Two us gentiles and one Jewish guy who worked on the technical crew.  He was in his 30s and one of the funniest people on the crew.  However, it wasn't so funny when he bluntly said that if his daughter married outside the faith, she'd no longer be his daughter.  He loved her but to wed a non-Jew was forbidden.  1905.  1985.  Tradition.

Danny Burstein is just so right for the lead role.  And that part is not easy.  Tevye is onstage a lot with a range of emotions that goes from funny and bewildered to caustic and intolerant.  You relate to him.  The themes of Fiddler on the Roof are universal and still relevant.  There's rising anti-Semitism in the Russian town and the Jews are evicted from Anatevka.  Some will seek a new life in America.  Look at this year's news headlines.  Syrian refugees.  Anti-Muslim sentiments in the U.S.A.  This is a relevant musical.  I saw Danny Burstein last year in the revival of Cabaret.  He played the Jewish shopkeeper who has a romance with a German woman who's not Jewish.  They're in the Berlin of the early 1930s with Nazism on the rise.  There's anti-Semitism in the city and Jews are being evicted.  Before that, I saw him as Luther Billis in the excellent first revival of Rodgers & Hammerstein's South Pacific.  He redefined that role with his brilliant performance, bringing out a previously untapped depth, toughness and complexity in the character.  Danny is quite a performer. 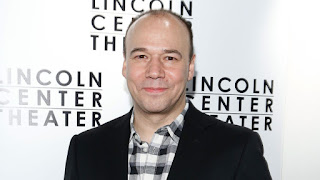 As for the dancing in Fiddler on the Roof...Lord, have mercy!  I'm surprised the preview audience I was in didn't give the famed "Bottle Dance" a standing ovation.  Those chorus actors danced throughout the show as if they were in a state of heightened ecstasy that was nearly orgasmic.  Maybe the audience was having a surreal moment.  The dancing was so extraordinary that maybe the folks in the audience thought they were watching a movie with special effects.  Wrong.  Real actors were the special effects.

If you're in New York City and you want to take in a play, please consider Fiddler on the Roof.  Here's a short ad for it.
Here's a number from Fiddler on the Roof that Danny and castmates performed on NBC's Macy's Thanksgiving Day Parade telecast last month.
I'm a black, Catholic guy who grew up in South L.A. when it was still called South Central L.A.  This new Broadway production of Fiddler on the Roof thrilled me, touched me and put tears in my eyes.  I gave it a standing ovation.  And I want to see it again.  Bravo, Danny Burstein!  Happy Holidays.

Fiddler on the Roof opened December 20th at the Broadway Theatre, located on Broadway at 53rd Street in New York City.