On THE DANISH GIRL

Did Eddie Redmayne have a penis double for that one particular nude scene?  Now that I have your attention, let's look at THE DANISH GIRL.  Based on real-life people, we go back to the 1920s for a story that feels quite relevant in this modern age of high-profile transgender celebrities such as the Orange Is The New Black TV actress Laverne Cox and Caitlyn Jenner, formerly the Olympics gold medal decathlon champ, Bruce Jenner.  Over the summer, when I saw a photo of Eddie Redmayne in this new movie, I thought it was a shot of him starring in "The Jessica Chastain Story."  Wrong. 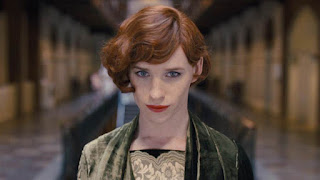 An opening scene shows a happy man in bed.  His face is half in shadow, half in light.  He's being physically affectionate with the woman on top of him.  She's Gerda Wegener, an artist.  She paints.  He gazes at her with  eyes full of love and says "My life. My wife."  And that, she is.  He's Einar, her husband.  The Danish Girl is, above all else, a love story.  It's also about submitting to the pull of a strong female energy, whether that female energy comes from an artist who is painting you or from a voice within yourself calling out for a true identity, a new portrait.  In Copenhagen, he has posed for his wife. 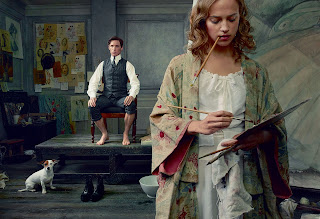 He, too, is a painter.  Their marriage is a joint work of art in its originality and expression. 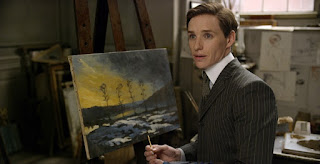 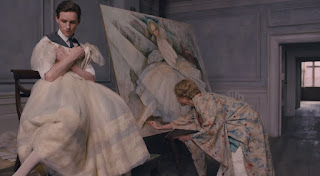 The softness and silkiness of women's clothing that he handles for art purposes stir his senses and soul.  He dresses as a woman to attend a function with his wife.  Initially, they're both giddy at his delight from wearing women's clothing.  Then, gradually, he gives himself over to the strong female energy within himself.  He and the wife seek medical advice.  It ranges from frustrating to rude to dangerously wrong. 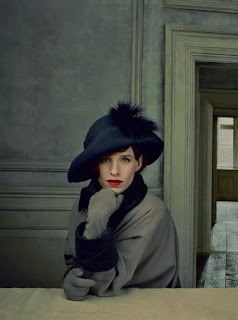 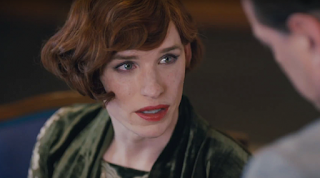 As a woman, he's attractive to men.  At first, he's fascinated. Almost schoolgirlish.  As things progress, he's conflicted.  He still loves his wife.  And she stills love him.  Ultimately, he wants to release his true self and undergo sexual reassignment surgery.  In those years, that was a new and extremely risky procedure.  Can the marriage or Gerda and Einar survive all this?  When Gerda meets with art dealers who might represent her, she's referred to as "a Danish girl."  Gerda's paintings take on a special vibrancy when she paints her husband in his new identity -- as "Lili."  We see that he has become The Danish Girl.  We see him study the movements of women, their carriage, as he journeys closer to sexual transition.  Early this year, we saw Eddie Redmayne win the Best Actor Oscar for his performance in another biopic.  He played the severely physically disabled and extraordinarily brilliant physicist, Stephen Hawking. 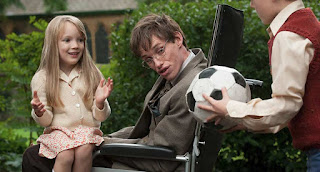 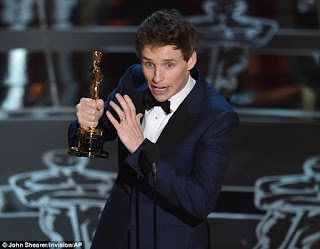 He absolutely deserved that Oscar for his work in The Theory of Everything.  Eddie Redmayne deserves another Best Actor Oscar nomination for his excellence in The Danish Girl.  Here's a trailer.
Redmayne has received rave reviews for this performance.  No less excellent is Alicia Vikander as the wife, Gerda Wegener.  She is the equally conflicted artist and lover who supports him in his recreation.  In her performance, we feel how rocky a road one can travel in a search for personal truth.  His pain has a ripple effect on her.  We feel her pain and confusion and love.  She is brave as she faces possible loneliness watching Einar transition to Lili.  Alicia Vikander deserves Oscar consideration for this performance.

Redmayne is so right for this role.  There's a touch of androgyny in the actor's lithe appearance.  He looks like he could have been a highly popular music star in the glitter glam rock scene of the 1970s.  Or he'd have been perfect to star as Dr. Frank-N-Furter in a production of The Rocky Horror Picture Show.  That look works in his favor for this film.  Watching him as Einar rediscover himself and see himself in a new way is amazing.  And there's suspense.  We know how society is.  Will he be in physical danger?  Yes, the story starts in the 1920s but it feels quite contemporary and relevant in issues it raises.

I saw The Danish Girl on a chilly Sunday afternoon in a major downtown cineplex.  The theater was packed.  You can see the film when it opens nationwide on Christmas Day. 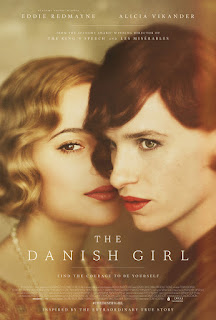 The Danish Girl was directed by Tom Hooper, the man who won the Best Director Oscar for The King's Speech, a film that also won the Oscar for Best Picture of 2010.  He then directed the 2012 film adaptation of the hit stage musical Les Misérables which starred Hugh Jackman, Anne Hathaway, Russell Crowe and Eddie Redmayne as Marius.