Singer and Oscar winner, Frank Sinatra.  A true American legend.  Saturday, December 12th, marks the centennial of his birth.  I grew up listening to and falling in love with his music and his performances.  Mom and Dad were major fans.  Sinatra on a network TV musical variety special was obligatory viewing on our household.  There was and will never be another like this superstar of song. 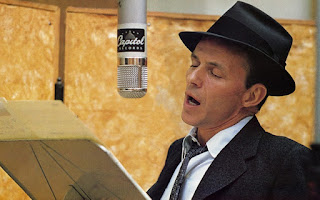 Mom explained to me, when I was kid, what bobbysoxers were and how they screamed for band singer Frank Sinatra the way teens did for The Beatles in the 1960s.  And he was very skinny when he cut hit records in the early 1940s with vocals that made the teen girls swoon. 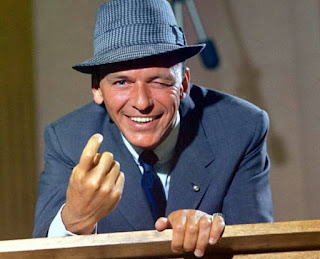 So when I saw the Sinatra phenomenon lampooned in 1940s cartoons on Saturday morning TV, I could really get the visual jokes. 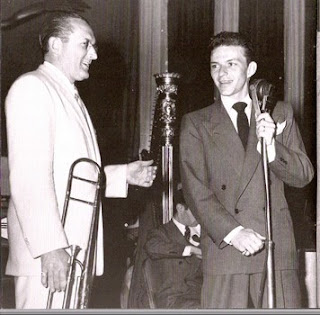 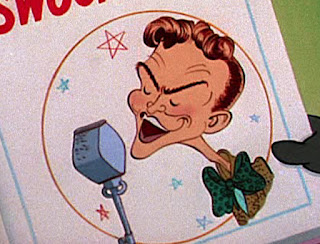 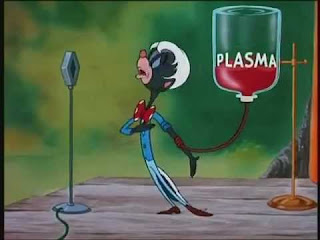 Like Bing Crosby before him and ahead of Peggy Lee and Doris Day, Frank Sinatra was a band singer whose popularity got him tapped by Hollywood to be a movie star.  Like the other three band singers mentioned, his film acting talents were so strong that he got an Oscar nomination.  Sinatra came out of a severe career slump when he won the Best Supporting Actor Oscar for his performance the tortured soldier in From Here To Eternity, the World War II drama that also took the Oscar for Best Picture of 1953. His other nomination was a Best Actor Oscar nomination for playing a junkie.  The film was 1955's The Man With The Golden Arm. 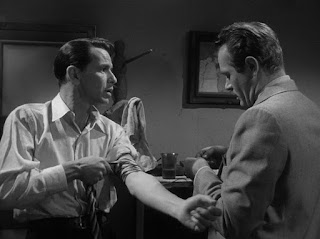 In the 1940s, most of his movies were MGM musical comedies in which he had a tender-hearted, boy next door image in films such as Anchors Aweigh, Take Me Out To The Ball Game and On The Town, three Technicolor musicals that co-starred Gene Kelly.  Sinatra's two Oscar nominations came for performances in gritty black and white dramas of the 1950s.

In the late 1970s, Sinatra was in concert performances.  One night, he played Chicago's Arie Crown Theater.  I'd graduated recently from Marquette University and was living in an apartment building in the campus area.  My Saturday morning ritual included listening to the Roy Leonard morning show on WGN, a station we picked up very clearly there in Milwaukee, Wisconsin.  Leonard regularly had trivia contests for call-ins.  One morning, Sophia Loren was his in-studio guest.  He asked a trivia question relative to one of her films.  Not only was I surprised that I got through after I dialed with the answer, I won!  Sophia Loren said "Hello" to me over the phone.  I was totally giddy, gushed how much I love her film work and added, "We were both born on September 20th!"  That would've been enough of a prize for me.  However, I got another one.  I'd won two tickets to see Frank Sinatra in concert at The Arie Crown Theater.

A fellow M.U. grad and a groovy friend also lived in the same apartment building.  I knew she dug Sinatra and I asked her to be my date.  She had a car and we drove to Chicago for the show.

The story gets even better.

We were in the absolute first row.  Any closer, we'd have been on stage with him.  And, in that sold out audience, we were surely two of the youngest fans in the house.

Sinatra not only looked great, he was in peak form.  And in a fabulous mood.  His vocal interpretations, his song stylings were so extraordinary that the orchestra members behind him applauded.  He was in such a swingin' mood that he told a few minutes of jokes and he killed.  You knew he was killin' it when you saw that the orchestra was laughing.

There were standing ovations and encores.  When Sinatra was taking one of his final bows, he looked at me in the front row, standing and clapping wildly.  He motioned me over to shake his hand.  I shook Sinatra's hand!  And my date was a witness!

There I was, a black guy in his 20s who, inside, wanted to scream with glee like one of those female bobbysoxers in the 1940s.  That is a moment I will always, always treasure.

In the 1990s, I worked on "Good Day New York," a local weekday morning show on WNYW/Fox5 TV.  One day, I had Christina Crawford as a live in-studio guest.  She was in town for an appearance relative to the 20th anniversary of her controversial memoir/Joan Crawford biography, "Mommie Dearest," being published.  In the green room after the interview, Christina and I talked more about Joan Crawford and about other Hollywood stars who had adopted children.  Christina said that, within the community of Hollywood kids, it was well known that if you were having problems with abuse, if you wanted to run away and felt you had nowhere else to turn, you could always go to Frank Sinatra's house.  His home was your safe haven.  He protected kids.

I'd never heard that Frank Sinatra story.  But I love it.