On BRIDGE OF SPIES

I've been a devoted Tom Hanks fan ever since I saw him in pumps one night a week on ABC in the 1980s.  Hanks and Peter Scolari in the "Bosom Buddies" sitcom broke me up laughing every single episode.  I was at Milwaukee's ABC affiliate, working in my first professional TV job.  "Bosom Buddies" was always morning office talks the day after it aired.  I followed Hanks from the small screen to the big screen.  He's come a long way -- with hit films and 2 Best Actor Oscars to prove it.  I saw BRIDGE OF SPIES with friends on Thanksgiving night.  We loved it.  Steven Spielberg directed this political thriller that has Hanks at his best.  The movie is based on a true incident and real-life people from the 1950s.  Hanks plays a James Donovan, a Brooklyn family man who is also a lawyer.  He plays by the rules with America's Constitution being one of his personal rule books.  He reminds you a bit of Atticus Finch in the movie To Kill A Mockingbird.  Remember when the sweet neighbor lady, Miss Maudie, speaks to Jem, Atticus' little boy?  She says "...some men in this world are born to do our unpleasant jobs for us.  Your father's one of them."  The very same applies to Donovan.  In court, he has to defend an arrested Soviet spy during the Cold War crisis.  Frankly, there are people ready to just jail or execute the spy without a trial.  They give Donovan the vibe that he's a weasel for doing the honest legal work that is his job.  The Soviet spy must get a fair trial or the Soviet Union can use that against the United States.  Notice that Hanks' character is in patriotic colors -- a dark red,white and blue -- or positioned near the flag.  Donovan is true to the rule books of the law profession and to the law of the land. 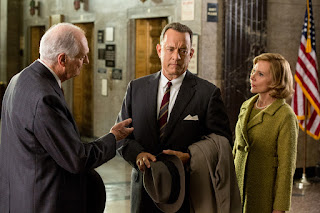 Alan Alda, on the left, plays a senior attorney.  Amy Ryan stars as the rightfully concerned and loving Mrs. Donovan. 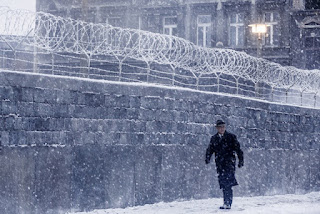 As if that's not enough,  Donovan is then asked to help the CIA in the exchange of the Soviet spy for a captured American pilot.  The pilot, Francis Gary Powers, was in an American U-2 spy plane.  This assignment takes Donovan to snowy, cold, dangerous Berlin right when the Berlin Wall is being built. 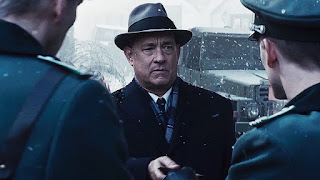 I don't want to tell you too much about it.  Seven of us saw Bridge of Spies after Thanksgiving dinner and we were glued to the screen.  No turkey-induced drowsiness.  The movie is beautifully photographed, well-edited and smartly written.  We got espionage suspense, political tension plus action that made us say "That's so Spielberg."  The Gary Powers spy plane sequence...wow.  Totally exciting.

Will Bridge of Spies bring Tom Hanks another Oscar nomination for Best Actor?  It could. He's that good in it.  All of us on Thanksgiving night agreed that a sure bet for an Oscar nod is former Milwaukee resident Mark Rylance as Rudolf Abel, the spy. 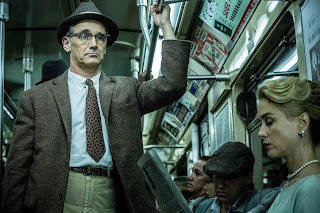 Abel has blended into the ordinary fabric of everyday New York life, keenly aware that he's being watched.  This is a man who recognizes good, but has a reason not to believe in happy endings.  There's a great economy in Rylance's physical work as Abel.  He's very contained yet a commanding presence.  I believe Bridge of Spies will make Mark Rylance an Oscar nominee for Best Supporting Actor.  His is a stand-out performance. 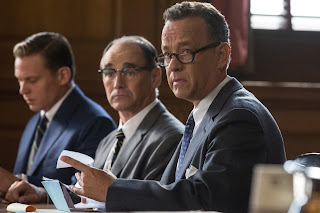 The American warmth of Donovan and the Soviet coldness of Abel are interesting to watch as played by these two actors. 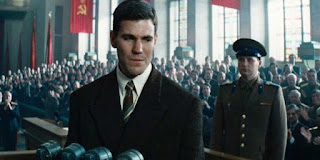 One day, Donovan is having dinner as usual with his family in Brooklyn.  The next thing you know, he's dealing with Berlin and Soviet Union politics -- a basically ordinary man with a huge unpleasant job that's the kind of thing we'd see years later on Mission: Impossible.  That's one of the things that really hooks you in the last third of the movie.  You don't know how this exchange deal is going to go down because everything's so duplicitous.  There is another person besides Powers and Abel to be exchanged, if Donovan can facilitate matters.  Here's a trailer for Bridge of Spies.
TV star Lee Majors played U-2 pilot Francis Gary Powers in a 1976 made-for-TV movie.  Around that time, the real life Powers was a member of the KNBC local TV newscast production team in Los Angeles.

Bridge of Spies runs about 2 hours and 20 minutes.  But you won't feel it.  This Spielberg political thriller moves and holds your interest.  I recommended it.
at December 01, 2015