Run! Run! Salma Hayek's got a gun!  If excessive gunfire and a non-stop bloodbath onscreen is your idea of entertainment, then EVERLY is the feature for you.  Salma Hayek is Everly, the raped and wounded single mother who thought she had police protection.  The protection is gone and she's defending herself against assassins sent by her ex-boyfriend, a mob boss.  She was soon to help police bust the mob boss. 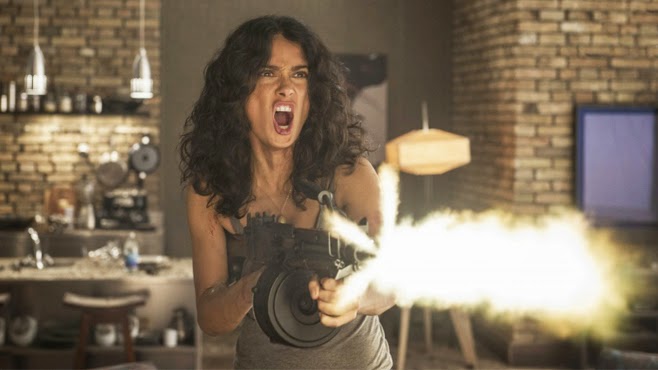 Why doesn't she have the amount of police protection from the mobster that she should?  We don't really know why beyond Everly, like double-Noah Crossed Evelyn Mulwray in the last ten minutes of Chinatown, shouting "He owns the police!"  Everly grabs guns to protect herself as she's pretty much trapped in a huge, tastefully decorated loft apartment that will soon become a blood-soaked crime scene. A lot of mean hookers are in that building and they try to kill Everly too.  She must protect herself and somehow manage to protect her mother and little girl who will, undoubtedly, be hunted by bad guys.  Everly must get her mother and child to come to her location where she can guard them. 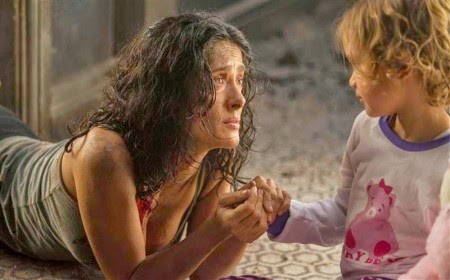 Can Salma Hayek handle the lead role in an action thriller?  Yes.  She most definitely can.  In her form-fitting outfits as she blows aways just about every bad man in sight, you look at Hayek's figure and wonder if the actress is really 48 or 28. 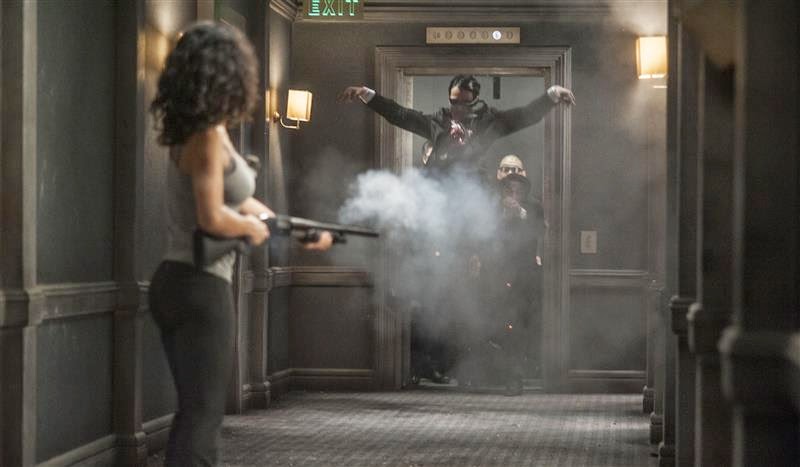 However, you wish that this talented actress had accepted an intelligent and classy female-driven action drama -- something like Alien and Aliens starring Sigourney Weaver or Gloria, the 1980 movie directed  by John Cassavetes and starring his wife, Gena Rowlands.  Gena played Gloria, the tough-as-nails New York City woman with a gun who's now guardian to a orphaned Puerto Rican boy hunted by the mob.  Gloria was a good neighbor and knew the kid's late parents.  She had a past that makes her a match for mobsters.  Aliens and Gloria focus on strong women with strong maternal instincts who can handle ammo while they protect a child.  Those scripts made sense.  The Everly script doesn't.  It's the kind of script where a bad guy could get six bullets pumped into his chest point blank, yet he can still get up and chase a woman down a hallway.

In Everly, the female is raped, shot, attacked with swords, threatened with explosives, placed in painful bondage... 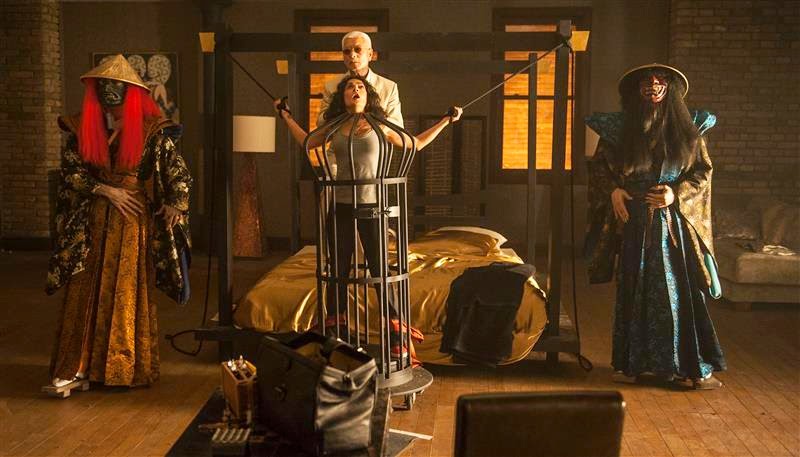 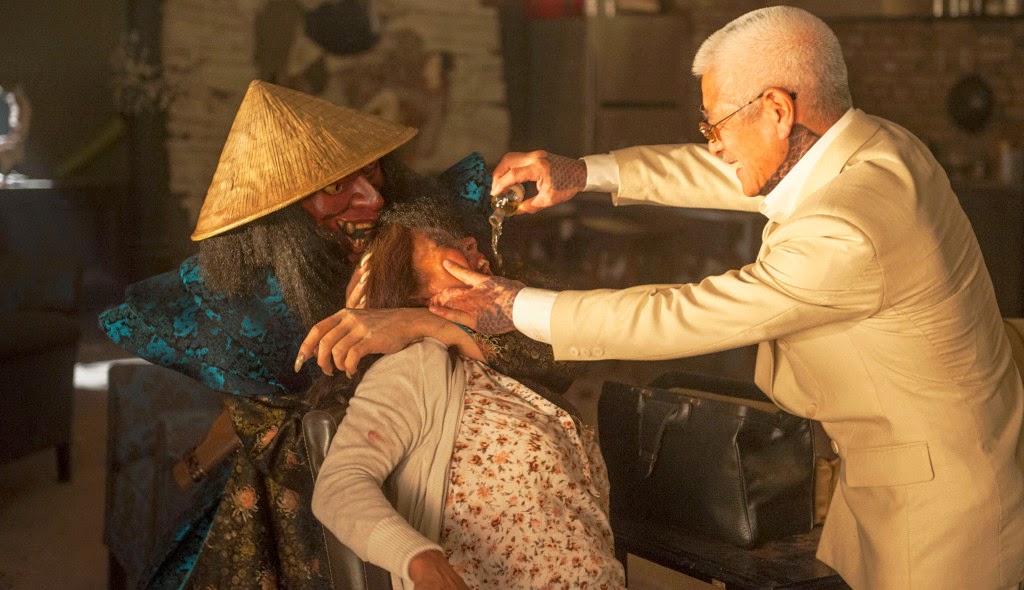 ...restrained and assaulted with acid.  Everly was directed by this young man -- Joe Lynch.  He and Yale Hannon came up with the story. 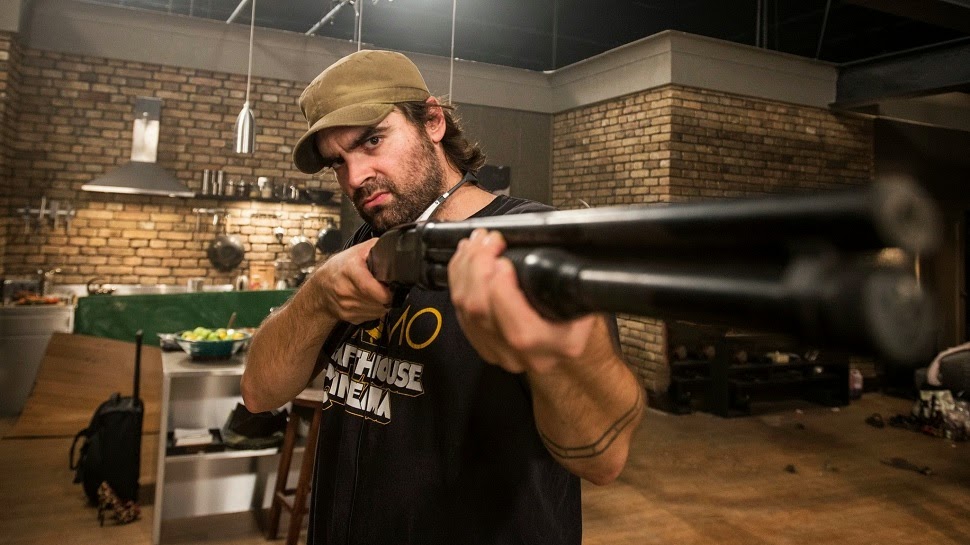 I didn't read this but I'm positive Lynch was heavily influenced by Quentin Tarantino in the blood and graphic violence area.  But, here, the blood and violence were pointless.  This is a one-note screenplay that a quartet of male high school seniors could've written after they were inspired by video games.  Another thing -- I believe that Joe Lynch is a married man.  After the movie, I was so bothered that I wished I could interview him and ask "If a crazy man stood behind your wife, mother, sister or daughter holding a meat cleaver that he was about to use on her, would you call that entertainment?"  We see such a thing in his movie.  Plus, with a recurring line like "That sure is a lot o' dead whores," you wonder about the filmmaker's attitudes are towards females on film.

Even Everly's sweet Latina mother is forced to grab a gun. 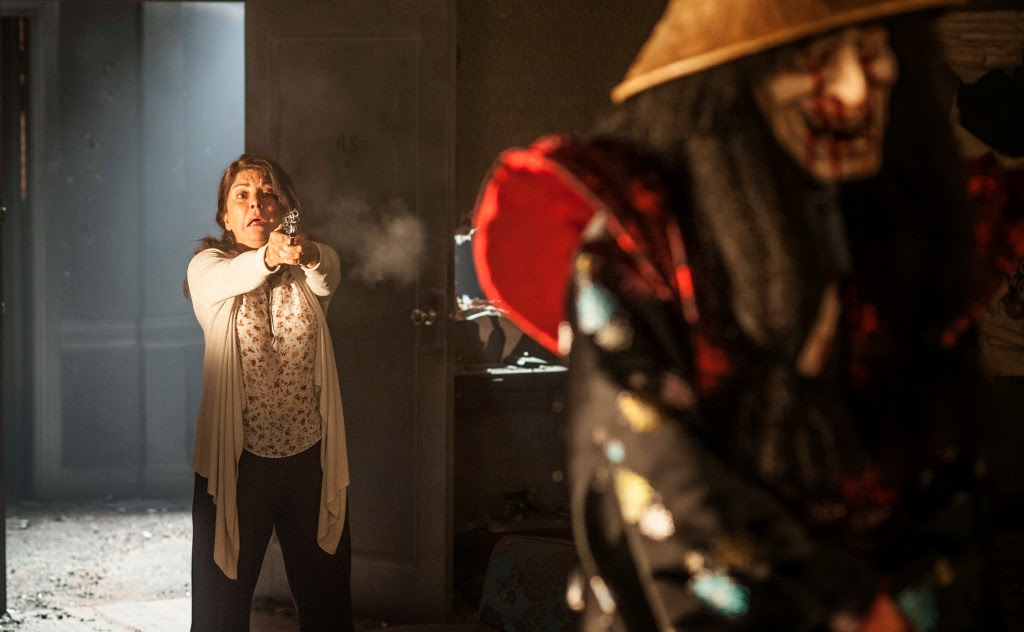 There are some pretty irritating images, or hackneyed movie stereotypes, in this film.  We hear Everly being gang-raped in the opening scene.  Everly plays into a certain male movie fantasy of the "hot Latin woman" not worthy of respect but useful for sexual pleasure.  Then we see a black woman as a violent hooker... 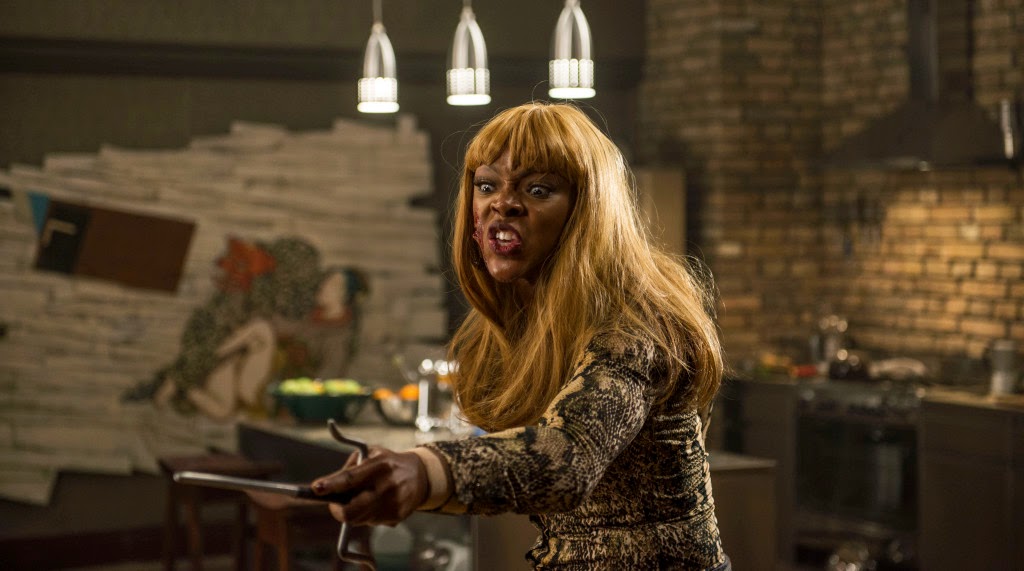 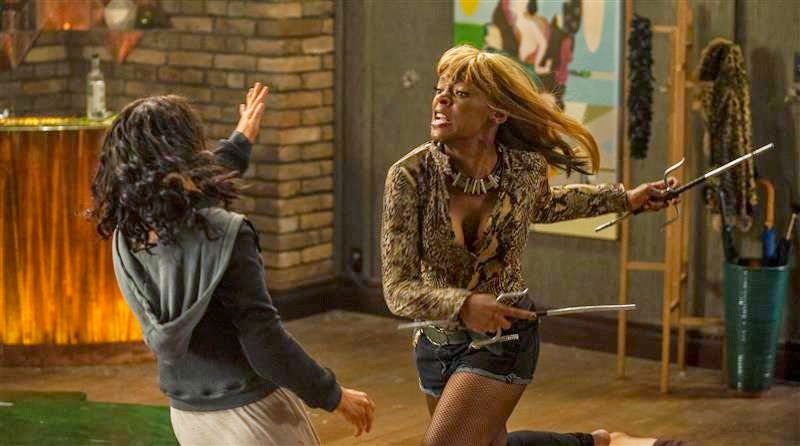 ...and the Asian men are really creepy, well-dressed villains who have a certain fetish. 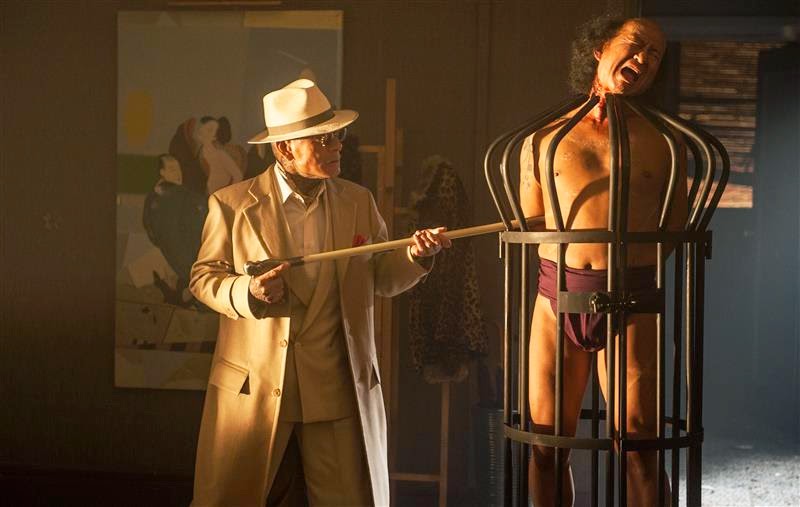 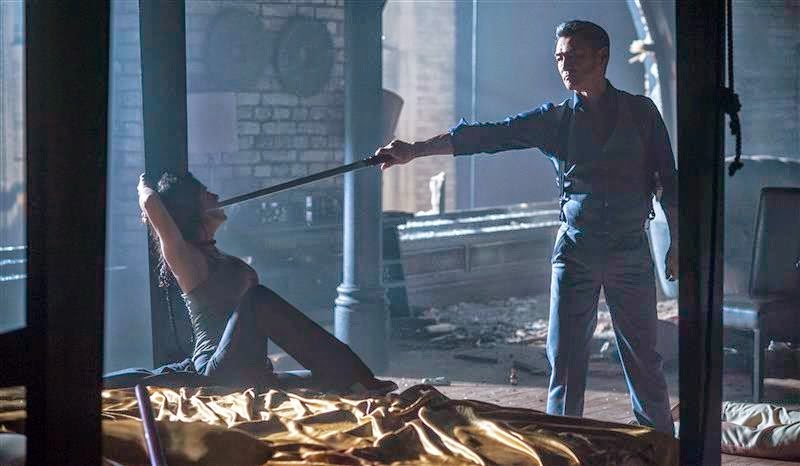 Another thing that put me off was the director putting a child in the middle of all this carnage and graphic violence.  In addition to that,  I had a problem with the look given the child actress given the part.  Latinas don't all look alike. I know that from my youth in Los Angeles seeing dark and light Mexicans.  Then came the years I lived in New York and knew all tones of Latinos. But here you have the dark-haired Everly and her dark-haired mother...and then Everly's little girl is given obvious visual clues to make you care about her.  She wears precious and very feminine little girl clothing.  She clutches a big, pink, cuddly, stuffed toy and....unlike her mother and grandmother...she's appears to be somewhat of a blonde.  Was the intention to make her look more Anglo so we'd have more sympathy for her when she's in danger? 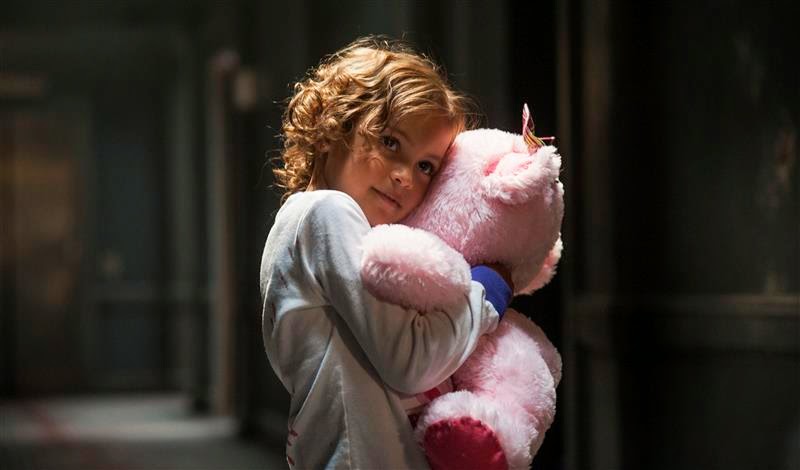 The mob boss who sent his evil henchmen after Everly is played by Hiroyuki Watanabe.  This role is a real waste of talent.  Watanabe is a handsome, sophisticated actor.  He's got screen presence. 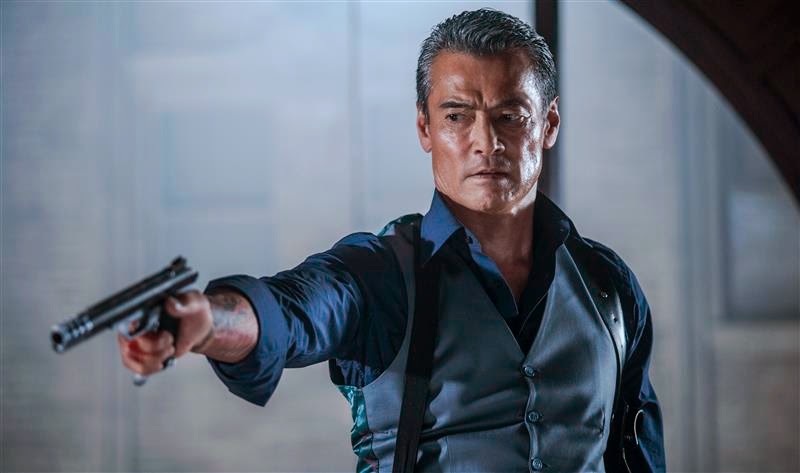 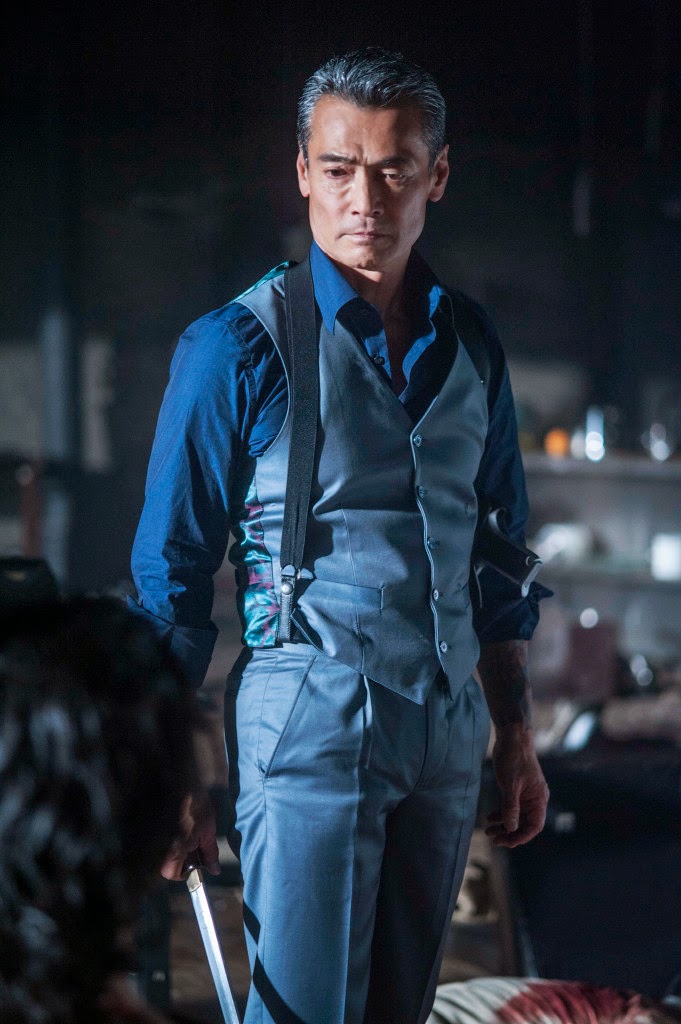 How I would love to see Hiroyuki Watanable and Salma Hayek as the leads in a sophisticated romantic comedy or drama -- something of quality with a smart script.

Everly opens Feb. 27th.  It's visually stylized and has some good editing.  A good actress has the lead role.  But it's basically a senseless splatter film with the soul of a video game.