He Gave Me WHIPLASH

Lord, have mercy!  Did you see J. K. Simmons burn up the movie screen in WHIPLASH?  What a vivid, intense performance.  First of all, you have to suspend your belief and give yourself over to the fact that this is a movie and not a documentary.  Simmons plays Fletcher, a physically and verbally abusive jazz instructor at a very upscale conservatory.  He slaps a student.  He throws objects at a student.  He makes fun of a chubby kid's weight.  He calls the students "faggots" and other inappropriate terms.  If I was a parent and if a music teacher had thrown something at my child's head and called him a "faggot," he'd need to see a proctologist to remove the clarinet I'd shove up his ass. 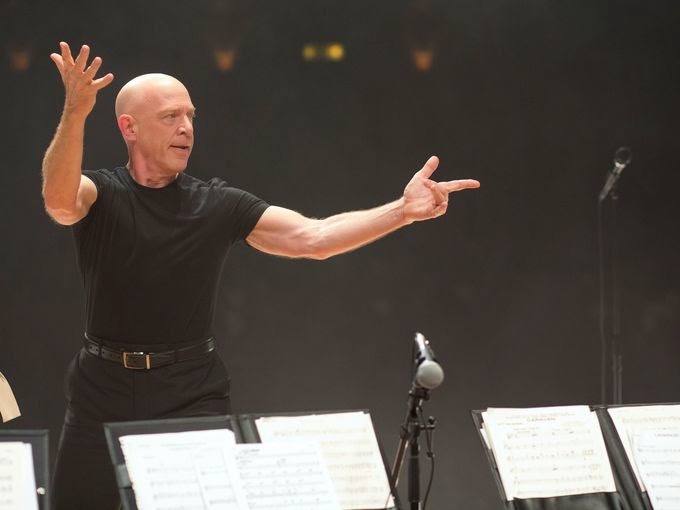 Whiplash is the name of a jazz piece the class has to perform.  This story touches on the obsession with art and how the artist's obsession can clash with a personal life -- like having a romance or a marriage.  This conflict is shown brilliantly in one of my all-time favorite classics, The Red Shoes.  Blood will be shed when the extraordinary ballerina must choose between the artistic life with stardom onstage and domestic married life offstage.  Blood will be shed by the shy young drummer in Whiplash.  He has potential.  Potential Fletcher could use in his band. 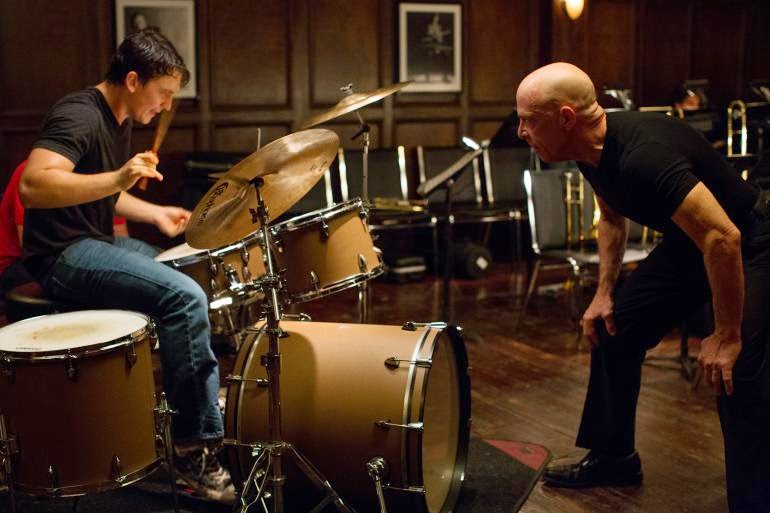 But Whiplash is not just about art vs. personal life.  It's about the current trend in our society to praise and reward mediocrity, the trend to advance sameness.  Fletcher hates mediocrity.  He hates a lack of originality.  That's what makes him a monster.  He's a toned, middle-aged monster in a tight T-shirt.  Just like Anthony Hopkins as Dr. Hannibal Lecter in The Silence of the Lambs.  This is not Mr. Holland's Opus. 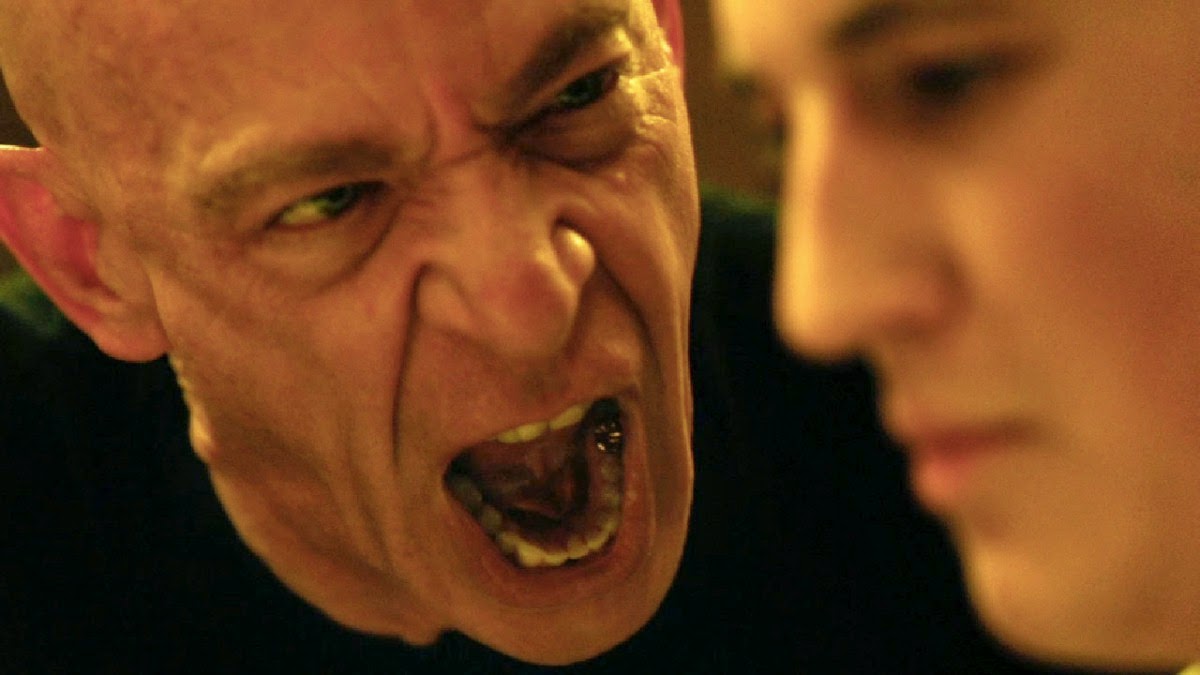 Fletcher tells impressionable Andrew, the drummer, a story about Charlie Parker.  I don't know if that tale is true.  There's talk of famed drummer, the late Buddy Rich.  Rich -- damn, he was good.  When he and a new singer named Frank Sinatra were in the same 1940s big band, their tempers clashed so heatedly that they once threw punches at each other.  Later, they became friends.  I heard Rich tell that story on TV when I was a kid.

I'll explain Fletcher this way:  He would totally dig Judy Garland's thrilling, jazzy, bongo-driven rendition of "Come Rain or Come Shine" that she did in her legendary Carnegie Hall concert.  Her rendition was different from Frank Sinatra's recording or Sarah Vaughan's.   Fletcher would hate every young female on American Idol or The Voice who sings "At Last" the same exact way Etta James did in her hit cover.  Etta's was an inspired interpretation of a song introduced in an early 1940s 20th Century Fox musical.  The Glenn Miller Orchestra with a vocalist did "At Last" in 1942's Orchestra Wives (available on DVD).  Etta covered it about 1960 with some R&B flavor.  Her version has been copied ever since.

One interesting thing about this film as that Fletcher does not fall in the "Those who can, do.  Those who can't, teach" category.  He's talented.  Like Boris Lermontov, Anton Walbrook's ballet impresario character in 1948's The Red Shoes, Fletcher can be polite and charming in addition to being a cold-hearted brute.  J.K. Simmons totally rocks this role.  I've been a fan of his for a long time.  I first noticed J.K. Simmons when he played the Aryan racist leader in the HBO prison drama series, Oz.  He was one vile, chilling convict on Oz.  By the way, the biggest crime during the 1997 to 2003 Oz run was that no cast member ever got an Emmy nomination.  Simmons, Chris Meloni, Lee Tergesen, BD Wong and the terrific Rita Moreno did some excellent work on that series. 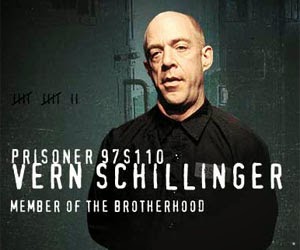 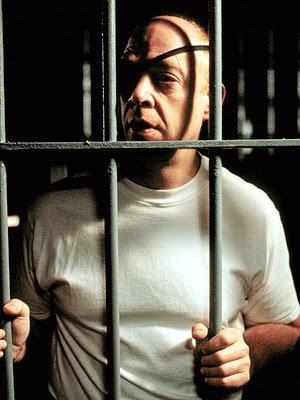 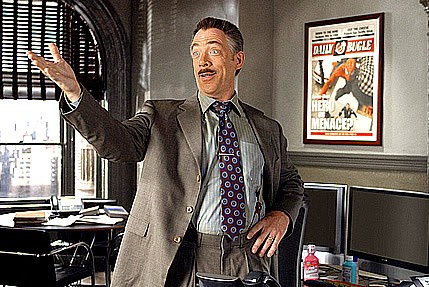 Simmons could then flip it, like he did in Spider-Man 2 and Spider-Man 3, and a make you laugh as a harried, fast-taking, big city newspaper editor with a His Girl Friday screwball comedy vibe.  And a hairpiece.  Then he could be the most lovable suburban dad in Juno opposite Ellen Page and be the perfect pitchman for those entertaining Farmers Insurance TV commercials.  He's a most versatile actor. 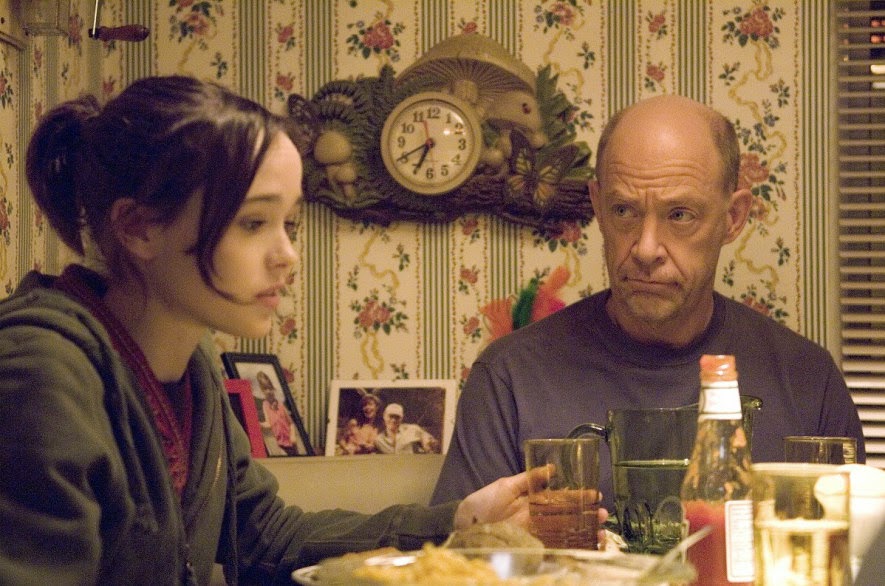 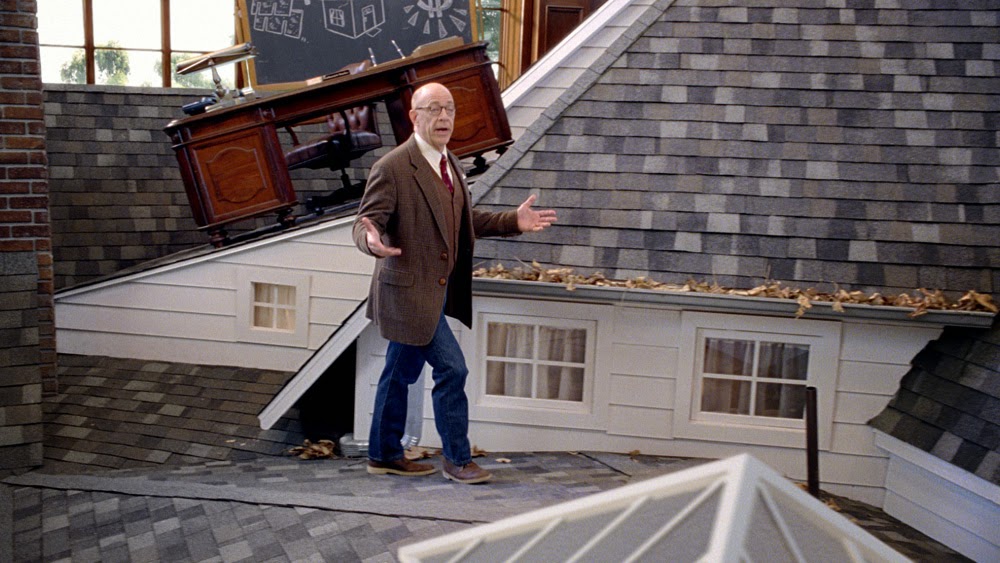 Miles Teller also hits just the right note as the shy, young musician who's more talented that he realizes.  Notice how Teller as Andrew is so shy that he has trouble making eye contact.  Andrew even admits he has that trouble.  There's an early scene in which Andrew gathers up the courage to ask a girl out on a date.  He knows an excellent pizza place.  They go.  It really isn't so excellent.  It's not a restaurant.  It's more like a mediocre, average deli with bland customers.  The guys at other tables are older.  One wears a bland sweater. The other could use a haircut.  They're not sophisticated and sharp like Fletcher.  Also, the music in this deli is a 1930s/40s big band cut.  Nice music but not a jam like something with Benny Goodman and drummer Gene Krupa or something by Duke Ellington.  Andrew can name the music cut.  Of course he can.  It's pleasantly bland.  So is he. 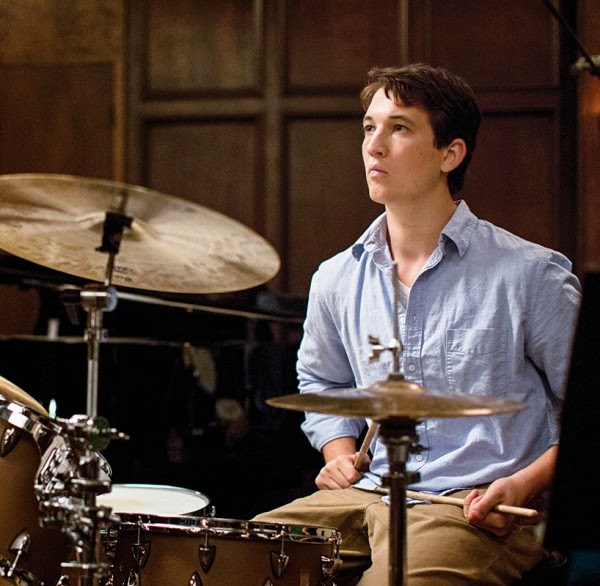 As he endures the tortuous classes, as a fire of arts originality and passion is slapped into him, he begins to make eye contact.  Andrew becomes direct.  He's not like his sweet but meek dad.  Notice Andrew's change in three scenes where food is served -- the pizza date, the family dinner scene and the diner scene again with the young lady from the pizza scene after he's grown into a stronger jazz musician in Fletcher's classes. 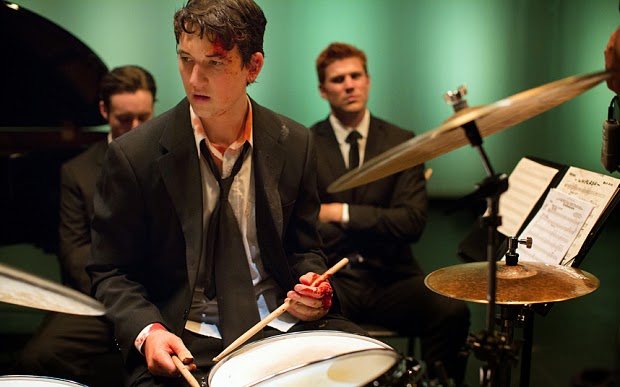 What's the story with Fletcher?  How far will he go?  How much can Andrew take?  If this was played for comedy back in the early 1970s, this would've been a Don Rickles vehicle to capitalize on his "The Merchant of Venom" stand-up comedy fame.  That's how insulting this teacher is.

Again, Fletcher is a monster who hates mediocrity.  This movie and the performances by J.K. Simmons and Miles Teller are far from mediocre.  See it if you can.  Whiplash  brought J.K. Simmons an Oscar nomination for Best Supporting Actor.  The movie is in the running for Best Picture.  J.K. won a Golden Globe and the Screen Actors Guild Award for his searing performance.  He got nominated for the Australian Oscar (Australian Film Institute Award) and the BAFTA (the British equivalent to the Oscars). He won the AAFCA Award (the African-American Film Critics Association).

Simmons will be guest host this coming weekend on Saturday Night Live.