She's a one-woman Match.com and TCM is showing one of her rare performances as a movie's lead character.

Thelma Ritter didn't have many lead roles in her highly entertaining film career.  But, when she did land a lead role, she knocked it out of the park -- just like the six roles she did that brought her Oscar nominations for Best Supporting Actress.  Ritter just looked, sounded, moved and behaved like a typical New Yorker who could both one tough customer and best friend you'd ever hope to have.  Not a beauty but audiences took to her face when she made her screen debut as the skeptical Macy's holiday shopper in Miracle on 34th Street.  She didn't get an Oscar nomination for that performance.  But she'd soon be in the race thanks to director/writer Joseph L. Mankiewicz. 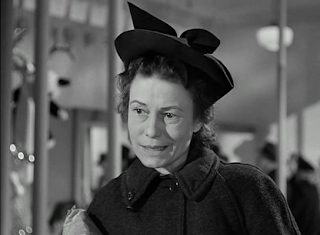 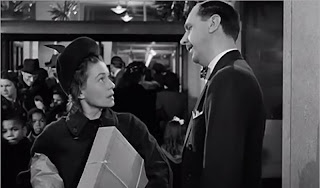 After her 1947 screen debut in the holiday comedy, Ritter's first nomination came for her great job as Broadway legend Margo Channing's wisecracking housekeeper, assistant and trusty sidekick, Birdie Coonan.  That was in the 1950 classic, All About Eve.  Ritter was so real in the role that you could feel the arch supports in her shoes and the dry skin on her elbows.  She was born to play Birdie.  Ritter made her screen debut in her mid 40s.  She quickly became one of the screen's classic gal pals and scene stealers. 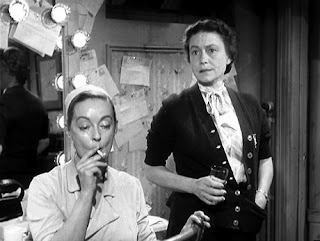 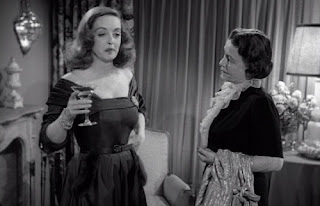 Ritter never won the Oscar but she stood out and made her scenes memorable even in pictures that didn't bring her a nomination.  For instance, there's A Letter to Three Wives co-starring Thelma Ritter as Sadie.  She's the lovable "tell it like it is" down-to-earth housekeeper to Ann Sothern's Manhattan radio show staff career woman. 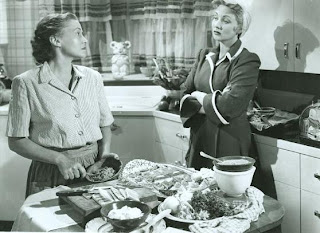 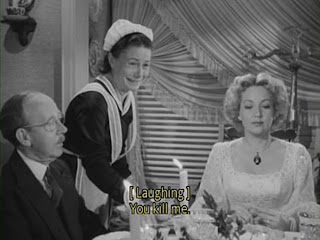 As a visiting nurse, her views on love and marriage give an injured photographer plenty to think about in Hitchcock's Rear Window.  She'll help him and his girlfriend solve the downtown Manhattan murder of a married woman right across his apartment building. 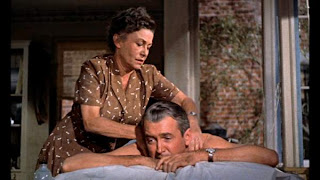 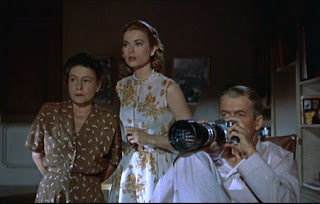 I feel that the 1950s was George Cukor's most interesting decade as a film director.  He made fine no-frills, heartfelt movies that seemed like neorealist Italian imports from Vittorio De Sica with their working class sensibilities.  An example is The Marrying Kind, one of the films he did with Judy Holliday after directing her to a Best Actress Oscar victory for 1950's Born Yesterday.  Cukor also directed Holliday in the wise and witty It Should Happen To You, a comedy that is relevant today in this age of reality TV stars.  Holliday, as Gladys Glover, is a reality TV celebrity of the 1950s.  Cukor had the magic touch for good remakes.  Holiday with Katharine Hepburn and Cary Grant improved upon the 1930 original.  A Woman's Face starring Joan Crawford was one of her best MGM dramas and a 1941 remake of a 1938 Swedish film starring Ingrid Bergman.  Bergman won her first Best Actress Academy Award for his Hollywood remake of the 1940 British thriller, Gaslight.  Cukor's masterpiece remake was the 1954 musical version of A Star Is Born starring Judy Garland at the peak of her musical and dramatic acting powers.

George Cukor directed gorgeous Jeanne Crain and Thelma Ritter in The Model and the Marriage Broker.  Jeanne is the fashion model.  Thelma is the lonelyhearts matchmaker in New York City.  This is a rarely seen movie that, although not a great film, is a must-see for Thelma Ritter fans and Cukor enthusiasts. First of all, it's a bit of a stretch to think that Jeanne Crain as a fashion model would not be able to meet Mr. Right on her own and have a fine romance in New York City with that face, figure and grace. 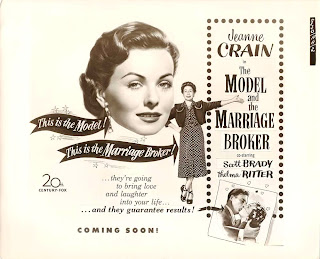 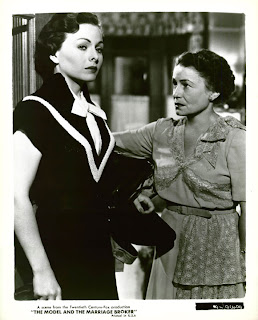 The attitudes are very 1950s, very pre-feminist era.  This isn't as sophisticated and successful as the Oscar-winning film Jeanne Crain and Thelma Ritter starred in together, A Letter to Three Wives written by directed by Joseph L. Mankiewicz who also gave us All About Eve, but I loved seeing Thelma Ritter stride through the lead role like a pro.  She was a real character and a versatile actress.  On Broadway, Thornton Wilder's The Matchmaker starred Ruth Gordon (screenwriter, A Double Life starring Ronald Colman and Adam's Rib starring Spencer Tracy and Katharine Hepburn; Best Supporting Actress Oscar winner for Rosemary's Baby).  This is the vehicle later musicalized as the famous Broadway musical comedy Hello, Dolly!  The Paramount Pictures film version of The Matchmaker starred Shirley Booth (Best Actress  Oscar winner for Come Back, Little Sheba).  If Booth hadn't been available to play Dolly Gallagher Levi, I think Thelma Ritter would've been terrific in the role. 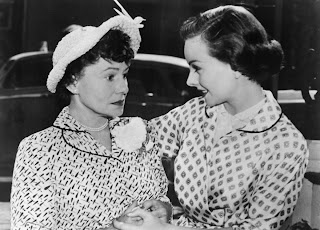 Jeanne Crain looks too beautiful to be a loser at love but she works to let us into the basic loneliness at the heart of the model.  I like her very much in this movie.  It's interesting to see the assorted characters looking for love with help from the marriage broker.  Future Broadway great Zero Mostel is one of them.  Two Cukor favorites also had supporting roles.  Tommy Noonan had a bit part after the verdict is announced in Cukor's hit comedy, Adam's Rib.  He's in The Model and the Marriage Broker.  Slim, angular Nancy Kulp was in Shane, Billy Wilder's Sabrina and The Three Faces of Eve starring Joanne Woodward.  She was also in Cukor's The Marrying Kind.  She's a loveless woman who wants matrimony in Cukor's The Model and the Marriage Broker. 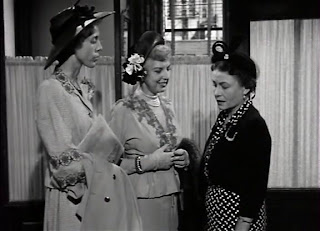 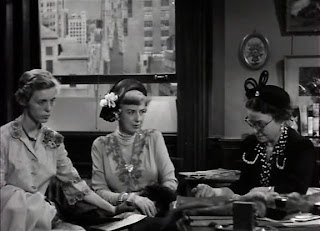 Nancy's on the left next to actress Dennie Moore.  Moore played Olga, the gossipy manicurist in Cukor's 1939 classic, The Women.   Above, Thelma's on the right. 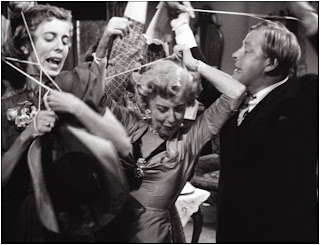 Here are Nancy Kulp and Dennie Moore with fellow movie actor Frank Fontaine.  A comic actor and fine singer, he'd go on to TV fame as "Crazy Guggenheim" on Jackie Gleason's hit Saturday night variety show.  Kulp would go on to TV fame as Miss Jane Hathaway in the long-running hit sitcom, The Beverly Hillbillies.  Nancy Kulp and Tommy Noonan would work for George Cukor again after 1951's The Model and the Marriage Broker.  Both had scenes with Judy Garland and James Mason in A Star Is Born.

Garland starred as an unknown singer with big band and Noonan played the band's pianist who sees his friend get discovered by and fall in love with the fading Hollywood star played by James Mason.

Unfortunately, Nancy Kulp's part with the two stars was in some of the notoriously lost footage. Warner Bros. edited out some scenes against Cukor's wishes when the critically acclaimed A Star Is Born completed its exclusive engagement and opened wide.  Nancy butts in between the two leads in the Hollywood boarding house rooftop reunion scene when Norman Maine finds Esther Blodgett after hearing her voice in a TV commercial. 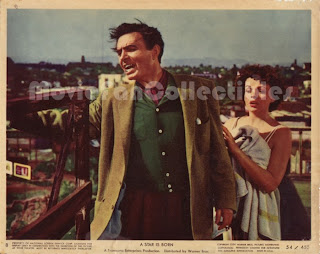 I wrote more about that in a previous blog on Cukor's A Star Is Born.  The delightful Nancy Kulp was a guest on my old VH1 talk show in 1990.  After the taping, she told me all about working with Cukor on that film, she told me about the deleted scene and explained its purpose in the story.  Cukor knew what he wanted and had set up a certain motif early in the story.  He explained the scene to "College Girl," his nickname for young actress Nancy Kulp.  The movie's motif was in her scene with Garland and Mason. 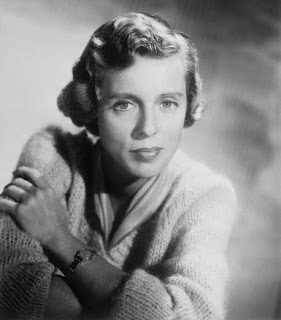 Will marriage broker Thelma Ritter save model Jeanne Crain from loneliness and heartache?  Will the matchmaker admit that she's just as lonely? 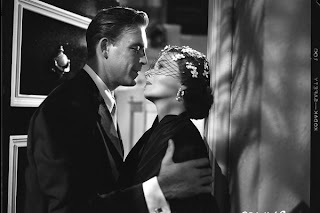 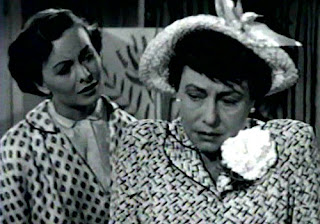 Find out by watching Thelma Ritter star in The Model and the Marriage Broker directed by George Cukor.  It airs Monday, August 26th on Turner Classic Movies (TCM) at 4:30p Eastern/1:30p Pacific.