Let's wish a very Happy Birthday today to a couple of men who could definitely get a hearty salute during Black History Month.  The first one can now be seen giving some needed racial history and avuncular wisdom to a young man in Lee Daniels' The Butler.  He's done several other movies and he's got a Tony nomination to his credits for his supporting actor work on Broadway.  He is the totally cool Clarence Williams III. 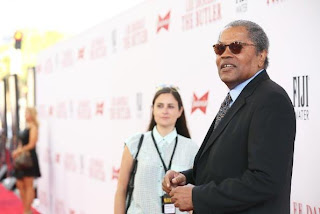 Oh, yes.  Clarence Williams III has done network television acting too.  A lot of network TV acting through the decades.  My generation remembers him as one of TV's hippest crimefighters ever in prime time.  He was "Linc," on ABC's hit series, The Mod Squad. 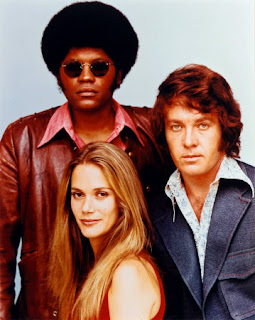 "They got busted.  Then they got badges."  Peggy Lipton was Julie.  Michael Cole was Pete.  ABC had a good, entertaining series that clicked with young viewers. 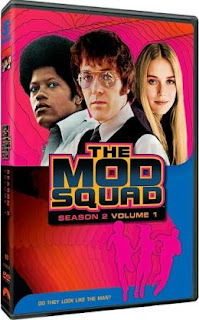 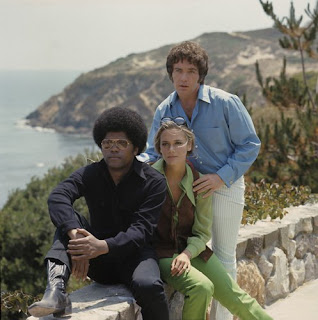 Clarence Williams III, with an Afro the size of a radar dish,  kept it real as they caught bad guys in Southern California every week from 1968 to 1973.  The three outsiders came together to keep other young people safe from crime.  As a kid growing up in South Central L.A., this show was so significant to my classmates and me because Linc was from South Central L.A.  For millions of us minority viewers, Linc was the dude!  Who did we have to thank for this diversity in casting and writing?  The incomparable Danny Thomas.  Former sitcom star Danny Thomas and Aaron Spelling were the executive producers of this ABC series.

Aaron Spelling's cop shows usually had a older "papa bear" supervisor to the crimefighters whether they were The Rookies, Starsky & Hutch or Charlie's Angels.  That was the Spelling formula.  In The Mod Squad, brawny Tige Andrews was Capt. Greer. 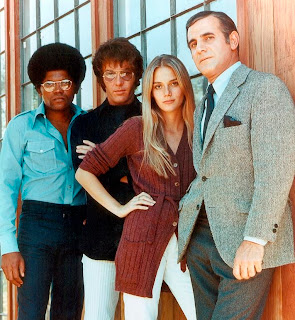 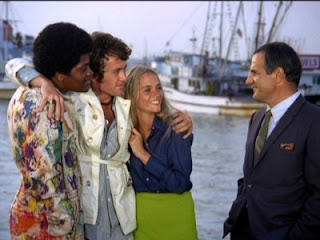 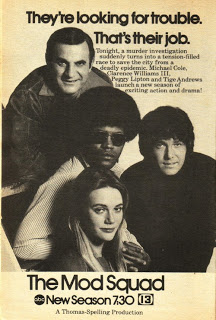 Yesterday, we got the news that novelist and screenwriter Elmore Leonard died.  Williams performed his words on the big screen.  He had a supporting role in 1986's 52 Pick-Up starring Roy Scheider and Ann-Margret. 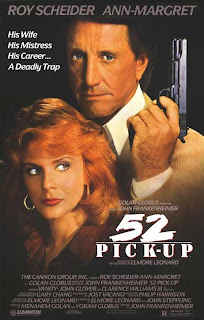 It was excellent to see Mr. Williams in Lee Daniels' The Butler -- and still keepin' it real. 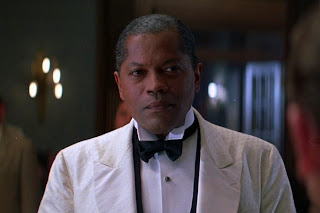 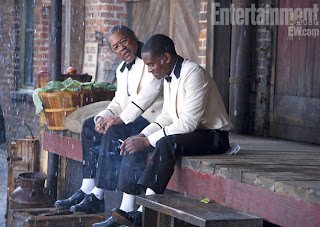 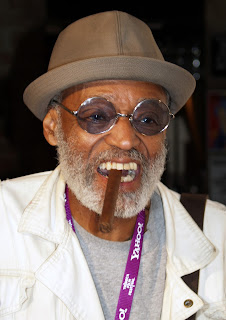 I've heard him called "the godfather of blaxploitation films."  I'd call him "the godfather of independent films."  His influence is wider than the blaxploitation genre, in my humble opinion.  Oscar-nominated director/screenwriters like Spike Lee and Quentin Tarantino owe much gratitude to Melvin Van Peebles' groundbreaking independent films.  Hollywood noticed his black and white dramatic film, Story of a 3-Day Pass.  In it, a black American G.I. overseas is demoted for his friendship with a white French lady. 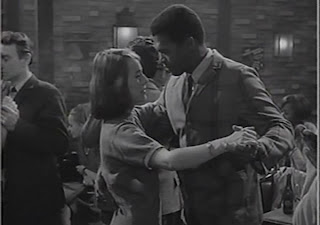 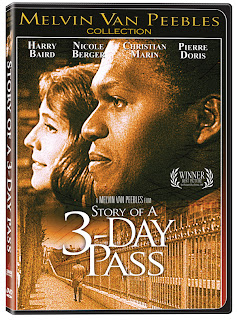 The 1968 release was shot in Paris.  Hollywood thought the director/writer was a white Frenchman...like Trauffaut.  Wrong.  He's a black brother from Chicago. 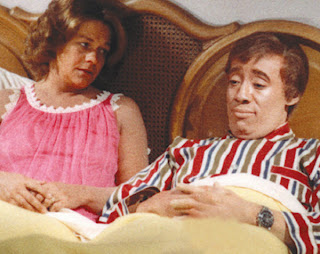 We'll see just how liberal she is when he wakes up black and his life changes. 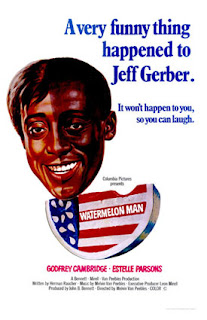 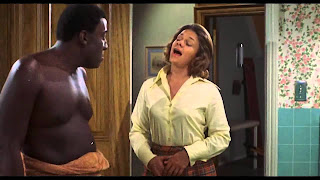 By the time she got in front of the cameras for director Melvin Van Peebles, Estelle Parsons had interviewed Marilyn Monroe for NBC News and had won a Best Supporting Actress Oscar for Bonnie and Clyde.  The following year, Watermelon Man screenwriter Herman Raucher would help Warner Bros. have a huge box office hit with the nostalgic and sweet drama, Summer of '42.  He'd get an Oscar nomination for Best Original Screenplay of 1971.  His Watermelon Man deserves a second look today. 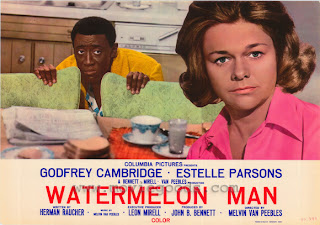 Maybe it's time for a gender switch remake with Wanda Sykes starring as a Paula Deen-type.  Melvin had a black actor playing a white character nearly 20 years before Eddie Murphy played an old Jewish New Yorker in the comedy Coming to America (1988). 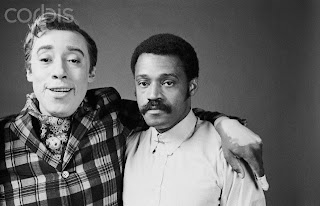 The independent film Melvin Van Peebles made and starred in after Watermelon Man started a whole new game.  Bam!  A bold, new chapter in American film. 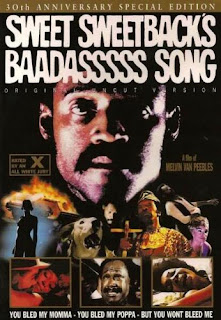 He really made Hollywood pay attention to black people with this revolutionary indie hit.  1971's Sweet  Sweetback was the character who presented a modern-day black point of view in a film directed, written and produced by a black person -- Melvin Van Peebles.  And he was Sweetback.  This movie was the talk of my community when I was a kid.  Folks didn't just talk about it.  They went out and paid money to see it.  Many saw it more than once.  These were new onscreen images and stories for Black America.

In the late 1980s, during my VH1 years, actor Mario Van Peebles was on my first talk show for the network.  Mario was one of my most gracious and supportive guests.  Supportive in the way that he expressed his happiness and pride at seeing another black performer (me) on national television.  That, like seeing Clarence Williams on The Mod Squad, made me feel significant.  It was a most cherished compliment. 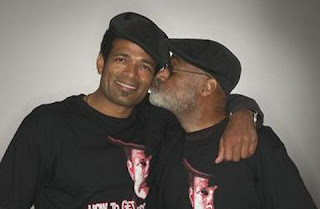 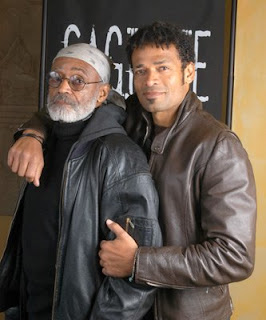 Like father, like son.  I met Melvin and did the same exact thing.  Our legendary filmmaker invited me to his office and treated me like another son.  He enabled me to get my Screen Actors Guild card.  That's a major reason why that union card is so dear to me.  There's black history behind my having it.

To get my SAG card, I had a bit role in a one of Melvin's lesser efforts.  A comedy starring Mario.  If I recall correctly, the whole indie movie was shot in a week.  I knew it wasn't a classic in the making, but I didn't care.  I was working with Melvin Van Peebles and Mario Van Peebles.  And I'd qualify for a SAG card!  One of the most wonderful and memorable things about my day on the set was watching father and son.  Mario affectionately calls him "Pop."  They hug, they kiss.  They love each other.  They're respectful of others.  My dad had so much trouble displaying physical and public signs of affection like that.  It often hurt, because I was a shy bookworm who really just needed a hug many times when I felt overwhelmed by life.  I wish we'd been like Melvin and Mario. 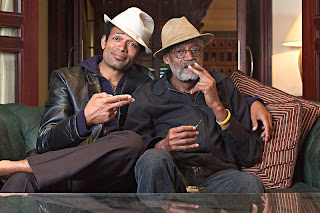 Wishing you a most groovy day, Clarence Williams III and Melvin Van Peebles.  Happy Birthday...and Thank You for the bright light you've added to our show business history.