My Date with a Gay NFL Star

I knew that headline would get your attention.  I did have a dinner date with a gay NFL star after I interviewed him on live television.  I'll tell you about that.  I thought about him when today's sports news broke.

Back in 1999, before she'd embraced my diversity, my mother and I had a tiff about my sexual orientation.  With a sort of Catholic parental stubborness, she said "Why did you decide to become gay?"  I replied, "Oh, I don't know.  I guess I wasn't having enough drama just being black in America."

Things are so much better now between Mom and me.  There's been a great change in our relationship. Today, there was a great change in sports.  NBA center Jason Collins reportedly is the first active player to come out of the closet.  He's in two groups that have met with high discrimination in America.  He's black and he's gay.  Sometimes it was even hard for black gay men to be noticed by gay white men.  Did Will & Grace have a regular gay black friend and neighbor in New York City?  Was there a black member of the Queer Eye for the Straight Guy team when it was a network hit?  Just two examples.  This Jason Collins story is one brave step forward.  His story will make for a historic Sports Illustrated magazine cover.  He's a free agent.  Will he get signed again?  Let's see.  The sports culture has changed a lot in just the last five years. 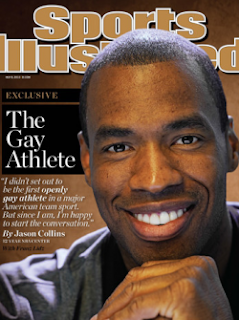 This will start a whole new conversation.  One that's long overdue.  This will also have an impact on how sports news is covered and who covers it.  Thank you for your honesty, bravery and compassion, Mr. Collins.  I bet that, by the time I post this blog, you'll have already received offers to write a book.  Nike recently signed WNBA star Brittney Griner. 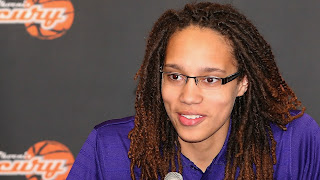 That was a major corporate move proving how the sports culture has changed in the last five years.  And that brings me to my dinner date with former NFL star, David Kopay.  The former running back asked me to take him to dinner one night in Milwaukee. 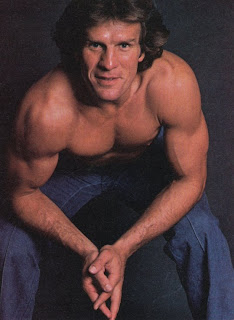 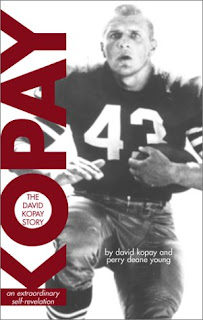 Of course, I said "Sure!"  This was in 1984.  I'd never had a date with anyone who'd been coached by the legendary Vince Lombardi.  I was co-host of a live hour-long afternoon show on Milwaukee's ABC affiliate, WISN TV.  Kopay had come out of the closet in his autobiography.  This was long before the changes in sports culture that we've seen this year -- like the two items mentioned above.  Kopay played for the San Francisco 49ers, the Washington Redskins and the Green Bay Packers.  He came out when his NFL career was over.  He was the first NFL player to do so when his book was published. 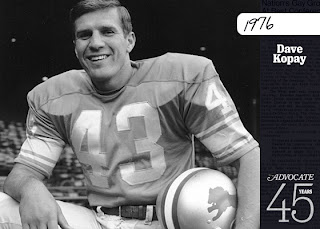 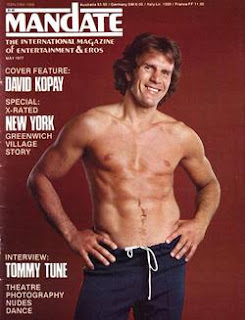 For May ratings, our WISN TV Vice President of Programming wanted our show to have a week of "controversial" or "sexy" guests.  In Milwaukee.  Because we were an ABC affiliate and ABC had a colossal hit with Dynasty, he told our show's little ragtag, fabulous staff to see it we could get the L.A. network publicity office to fly in any Dynasty cast member to be on our show in person.  Our show, called More, had a studio audience.  Every dealing we had with the L.A. network publicity department was a joy.  Its team tried to help us but, understandably, all Dynasty stars and supporting cast members were booked for May sweeps.  Our V.P. had also told us we could offer the guest a $2000 honorarium for the Milwaukee appearance.  I was the show's associate producer, so I'd been making calls with our excellent executive producer.

The Advocate magazine had carried a fine profile of Dave Kopay, saluting the bravery and importance of his book.  I contacted The Advocate to see if they could put me in touch with Mr. Kopay.  They did.  He had a successful business in L.A.  I told him I'm also "a member of the club" and bought his book.  I bought it, read it and felt his story and the stellar NFL career he had would change stereotypes.  He was a positive role model.  I asked him if he would consider flying in to be a guest on our show.  I wanted to pitch his appearance to my executive producer.  He said, "Yes."  I told my boss.  She loved the idea.  We took the idea to our V.P.  He wasn't too enthusiastic.  I was very passionate about this booking and my executive producer backed me up.  The V.P. gave in and told us we could have Kopay on the show.  But there was no money in the budget.  Somehow the $2000 available for Linda Evans, John James or Heather Locklear the previous afternoon had suddenly disappeared for Dave Kopay's plane ticket.

I made a flight reservation for Dave Kopay and called him.  This man could not have been kinder.  When I said, "I don't have enough to fly you out first class but I got you in business," he stopped me.  "Isn't your station picking this up?"  I told him what happened and how $2000 we had was suddenly not there for him.  I was paying for his ticket out of my own pocket because I believed in this appearance.

Dave Kopay told me to re-book him in economy.  He'd upgrade himself to first and pay the difference.  "Just take me to dinner afterwards at Karl Ratzsch's."  That would be his payment.  He loved that German-American restaurant.  It was a deal.  He wanted to help me prove a point to my narrow-minded Programming V.P. 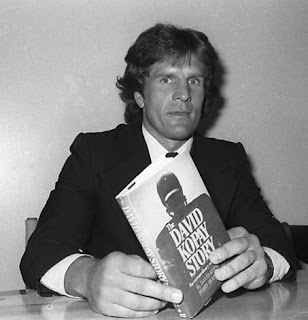 He was a great guest.  And we had a good studio audience that asked intelligent questions.  Kopay is passionate about football.  He hoped to follow a football career by having opportunities to coach professional or college teams.  He was also very interested in being a sports commentator on network television.  Those opportunities did not come his way -- and we can safely assume he was denied those opportunities simply because of his sexual orientation.  Nor was he signed by a company like Nike.  With his great looks, he did not get to pose for sportswear ads.  His story would be so different today. 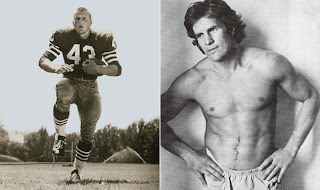 One of the best things about the Dave Kopay appearance on More occurred when the show was over.  There was a long line of guys who wanted to shake his hand, get his autograph and talk football.  They didn't care whether he was gay or not.  They just wanted to talk about the game -- and about Coach Lombardi.  THAT was the point I wanted to make.  It doesn't really matter which team you play for...it's all about the game and how you play it.  I was -- and still am -- proud of that show and proud of that day.  And I'm proud of those Milwaukee audience members and TV crew people who treated him with such respect and regard.

Early this morning I read the news about the New York Jets.  Tim Tebow was out.  Dave Kopay could talk about that dismissal on a network sports show.  Within the hour, I read the news that NBA player Jason Collins was really out.  How I'd dig hearing Dave Kopay talk about that on a network sports show too.  Let's remember this:  Way back when, Mr. Kopay bravely helped kick open the door to acceptance after he retired from the NFL.  I continue to be ever so grateful to him for his kindness.

And that guy can eat! 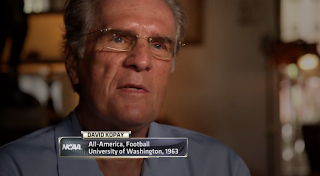