Late one night this week, one of the HBO channels aired Forrest Gump, the film that brought Tom Hanks his second consecutive Oscar for Best Actor.  This touching story of a sweet, gentle Southern  man and his adventures as he often runs down the road of life was a huge box office hit.  People quoted lines from the movie.  The most famous line quoted from the film is "Life is like a box of chocolates.  You never know what you're going to get."

I was introduced to Forrest Gump by a WNBC TV local news camera crew member in the spring of 1994.  I was a regular on Weekend TODAY in New York and did liveshots in the field every weekend covering events and places perfect for family entertainment.  When we were in the van headed back to the station after a show, the audio guy was just giggling and guffawing at the book he was reading.  I asked him what he was reading.  The paperback, which he bought at a yard sale for 50 cents, was Forrest Gump, a novel by Winston Groom.  I'd read in Premiere Magazine that Tom Hanks had completed a film version of it.  Because the book got so many belly laughs from my co-worker, I checked it out from my local New York library.  I laughed too.  A lot.  I read the book within a week.  Forrest had many wild and memorable adventures in his life -- episodes from being a college football star and a wrestler, to being a soldier in Vietnam, an astronaut, working on a boat, and even bumbles through acting in a low-budget science-fiction movie in Hollywood with a cranky starlet named Raquel Welch.

It was a slightly cynical yet fun and very funny American story that followed this big, blond hunk of muscle.  Yes, you read that correctly.  In the novel, Forrest has a crew cut and looks more like this... 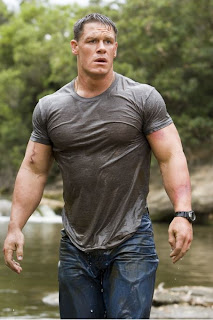 This poor Southerner is not the brightest bulb on the front porch, but he has all those amazing episodes in his life because is an idiot savant.  Says Forrest in the book, "Bein' an idiot is no box o' chocolates."  People want him.  His mother is a whiny, clinging old bat who always wants him to do things for her.  His girlfriend, Jenny, likes to roll around with him a lot when he's naked and he can't really figure out why.  We readers know why.  To quote a Woody Allen movie, Forrest Gump is "hung like a loaf of French bread."

So...when I soon heard there were screenings of Forrest Gump for film reviewers and entertainment correspondents...I definitely made a reservation.  I'm a hardcore Tom Hanks fan.  I have been for years.  I just had to see how he was going to play a 6' 6" Southern muscle hunk with a low IQ and a big johnson.  Well, he didn't.  Screenwriter Eric Roth kept the main characters and many of the episodes while he flipped the tale from daffy cynical satire to sentimental love story.  Hanks was a not the same Forrest in the book.  He was a variation.  There was even a variation on the chocolates line. 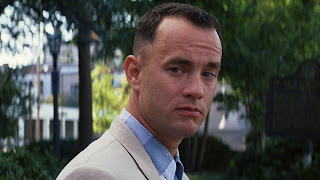 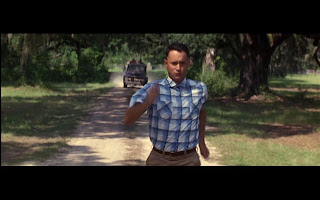 Mama Gump was changed from an old biddy to a strong woman who was the most devoted, unselfish movie mother since Barbara Stanwyck as Stella Dallas.  No one can play a strong Southern woman like that native born Southern Californian, Sally Field.  She gave us tender scenes as Mrs. Gump, the single mother who gives Forrest his spirit.

Jenny becomes a poignant character in the movie.  There's more intimacy than lust. 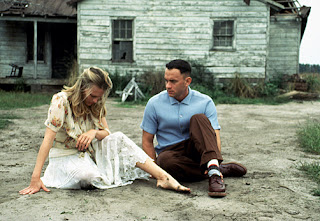 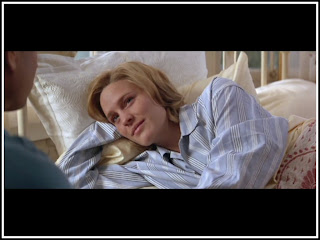 If I had another talk show right now in New York City, I'd love to have author Winston Groom on as a guest.  He didn't write or co-write the screenplay adaptation of his novel.  Eric Roth did it alone and won an Oscar for his work.  (Years later, he pretty much rewrote his Forrest Gump screenplay and called it The Curious Case of Benjamin Button starring Brad Pitt).

This was the very fitting cover illustration for Winston Groom's 1986 novel. 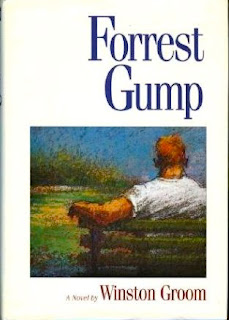 The movie took Oscars for Best Actor, Best Director (Robert Zemeckis), Best Screenplay Adaptation and Best Picture of 1994.  Because the movie was such a colossal hit at the box office, paperback editions were selling well at top bookstores.  I lived a block away from a Barnes & Noble and saw folks pick up the book for purchase simply because they'd just seen the movie.  The paperback version got this new cover. 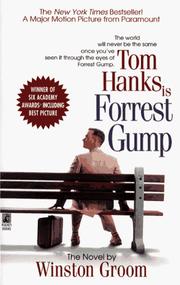 I often wondered how those folks felt after they read the book and discovered the night-and-day differences in the source material and what they'd seen on the screen.  With that paperback edition a best-seller because of the Tom Hanks movie, I'm sure Winston Groom pocketed a few extra royalty checks.  I sure hope he got a piece of the movie action.  But how did he feel when the screenplay removed a lot of the spice in his story and replaced it with sugar?  Or did he really care as he went to the bank...again?  I would totally dig doing an interview with Winston Groom.