I've mentioned before that I started my professional television career in Milwaukee.  From 1979 to 1985  at WISN TV, the city's ABC affiliate, I got my first spins at being a movie reviewer and TV host.  I started as a weekly entertainment contributor on Milwaukee's edition of PM Magazine.  In 1984, I was tapped to be co-host and associate producer of a live weekday afternoon show called More.  This was a big deal for me.  First, it was a live hour-long show with a studio audience.  Second, Liz Ayres (my co-host) and I may have been one of the first interracial teams to host a live weekday entertainment product on one of Milwaukee's network affiliates.

Liz and I had a special telecast in 1984.  In downtown Milwaukee, the Grand Avenue was a local event.  The mall of shops was new, attractive and about three blocks long.  Liz and I did a special broadcast from the mall because it would be large enough to accommodate all the Milwaukee fans who'd turn out to see our live special guest -- Milwaukee's own Liberace. 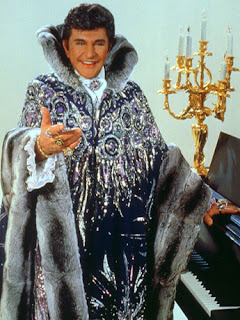 He was in his Vegas heyday at the time. He never forgot his Milwaukee roots. 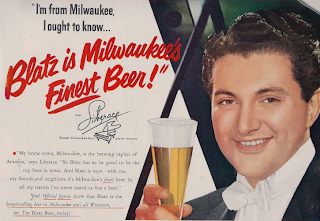 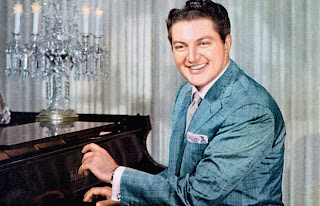 The mall was packed.  People filled the joint like he was a rock star.  Middle-aged women in the crowd waved and shouted affection at him like he was a rock star.  It was amazing to witness because I'd pretty much grown up seeing him do guest appearances on TV variety shows and even seeing characters like Bugs Bunny josh his famed candelabra and piano-playing style.  Liberace was part of America's pop culture.  There he was, seated with us on live TV one afternoon.  Liberace was flamboyant, he was friendly, he was full of energy and he seemed to get extra fuel from the affection of the crowd.  Liberace was a great guest.  A definite showman, he delivered.  He knew how to work a crowd.  He was exactly what you hoped he would be.  Only without the more festive attire. 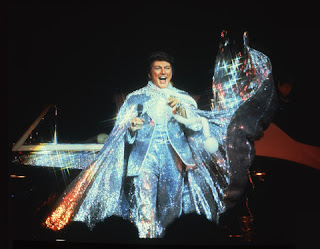 Next month, Oscar-winning actor and movie producer Michael Douglas plays Liberace in a biopic for HBO.  Actor and Oscar-winning screenwriter Matt Damon co-stars.  Debbie Reynolds, under a white wig and character make-up, plays Liberace's mother.  With acting talent like that, I am so eager to see this production.  Here's a preview of Steven Soderbergh's Behind the Candleabra.  It premieres May 26th.


Our Liberace show was in 1984.  A couple of years later, I was working in New York City for WPIX TV.  I saw the entertainer again at a book promotion event.  There was a sad and drastic difference.  He seemed feeble.  And medicated.  The inner light he had in 1984 had been dimmed by something.  He needed assistance walking.  He was, again, gracious but there was definite lack of energy about him. It was obvious he was not in good health.  Liberace died in early 1987.

I didn't become a big, popular TV star like other people I worked with before they were famous --- Rosie O'Donnell and Matt Lauer -- but I have been extremely lucky to have met and interviewed a lot of the people I did in the TV career I've had.  (And don't think it's over!  I'm determined to come back from this long brutal stretch of Recession-related unemployment.)

I wonder if WISN in Milwaukee still has our Liberace show in its archives?

Today, the country is heartbroken over the tragedy at yesterday's Boston Marathon.

When I started my TV career, I was on PM Magazine doing weekly film reviews, celebrity interviews and humorous lifestyle features.  I wrote and produced my own features.  I was also the staff's fulltime administrative assistant.  I answered the phones and viewer mail.  The Boston edition of PM Magazine, called Evening Magazine, was highly-regarded nationally.  Landing a spot on Boston's edition was an A-list booking.  Boston was seeking a third talent to make its co-host duo a trio.  The executive producer, Sue Levit, had seen some of my work and liked it. Two of my features had aired nationally.  She flew me out for an interview at WBZ TV.  I loved meeting her.  I loved being in Boston.  Sue flew me out a second time.  When I got there, she gave me the news that WBZ had decided to promote someone from within the company.  Sure, I was disappointed because I really wanted that on-camera gig.  However, it was great to see her again and great to be back in Boston.  I asked her why she didn't just tell me that over the phone instead of spending her money to fly me back there.  She replied that the decision had just been made.  Then she smiled and added a guarantee.  She guaranteed that because she did fly me back a second time, when I got back to Milwaukee, I wouldn't be answering phones and viewer mail much longer.  She said that my bosses would make better use of my TV talents.  She predicted that, one day, I'd move on from Milwaukee to something better.

Her guarantee, her prediction came true.

I got back to Milwaukee.  Within a couple of weeks, someone else was hired to answer the phones and viewer mail.  I was elevated to field producer and scriptwriter for our host duo. Also, I got to do more celebrity interviews on the show.  This was a major step-up for me at that time.  I went on to more national exposure on PM Magazine and, later, becoming host of More.  In 1984, I left Milwaukee to accept a job offer in New York City.  I never forgot the kindness, attention and career validation I got from Boston's WBZ and Sue Levit.  Since then, Boston has held a very special place in my heart.  Today that place hurts.  I am keeping Boston in my most fervent prayers for the city's healing and recovery and restored peace.