If you're a serious classic film buff, you already know this:  Claudette Colbert was slated to play Margo Channing in All About Eve.  Colbert reportedly injured her back while shooting 1950's Three Came Home.  A Hollywood bio pic, this drama starred her as Mrs. Agnes Newton Keith.   An American wife, she and her family lived in Southeast Asia in 1940-1941.  She was separated from her husband and child and confined in a Japanese prisoner-of-war camp during World War II.  Colbert's performance brought her some of the best reviews of her film career. 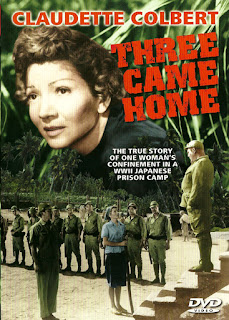 But the injury took Colbert out of the All About Eve production.  The script was sent to Bette Davis, whose career was in a lull at that time.  The rest is movie history.  Davis did the picture and made the role of Margo Channing her own.  Maybe too much her own, in a very fabulous way. 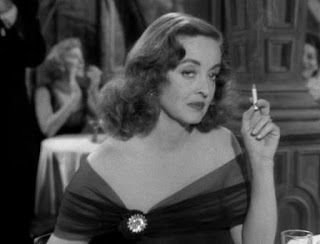 Davis' chic, sophisticated, ultimate Broadway diva look is iconic now.  This is a woman who'd toss a mink coat on the floor like it was bathrobe.  In the long battle for Broadway respect and accomplishment, you can see that she's a survivor and victor who has the scars to prove it.  Still, as her boyfriend Bill Sampson says, she's "a loose lamb in a jungle."  When All About Eve opens, we know we're going to see a new Broadway star get be exposed for the phony she is.  The character that she's manufactured for the public and personal glory is about to be assassinated.  There's a big clue in the literature of film from screenwriter/director Joseph L. Mankiewicz.  As that conniving little witch from Wisconsin, Eve Harrington, sweetly reaches out to accept a prestigious award, there's a stop-frame during the narration from the powerful and all-knowing theatre critic, Addison DeWitt.  Notice the prop guns on the wall behind Eve. 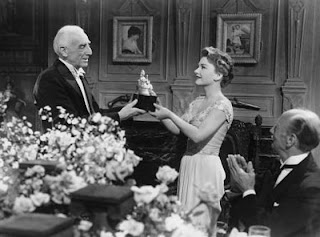 One gun seems aimed at her heart.  Eve will be shot down.  She backstabbed to get that award.  One of the people she used will get the dirt on her and reveal how unscrupulous a character she truly is offstage. 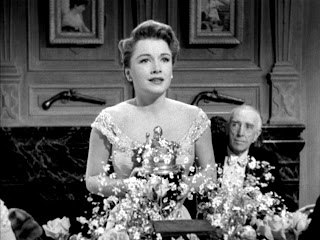 Part of the fun of watching this classic again is seeing how Eve Harrington weasels her way into the life, home and career of acclaimed Broadway star Margo Channing.  Eve wants Margo's fame and all the privileges she believes go with it.  Young, devious and talented, she is out to replicate Margo like a monster in a sci-fi pic.  Thelma Ritter as Margo's good friend and assistant, Birdie Coonan, is the first to detect this:  "...like she's studying you.  Like you was a play or book or a set of blueprints.  How you walk, talk, eat, think, sleep."  Cosmetically, Claudette Colbert would've been perfect opposite Anne Baxter's Eve Harrington. 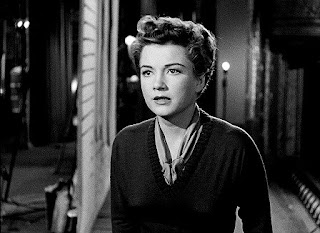 Colbert had more of the styling and attitude that Baxter's Eve imitates if she's truly out to make herself a younger human Xerox copy of Margo Channing. 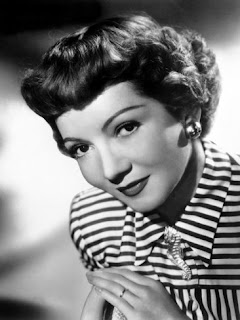 Eve may subtly begin to dress a bit like Margo Channing but...come on.  Seriously.  Does Baxter's Eve Harrington ever seem like a through-and-through duplicate of Davis' Margo Channing? 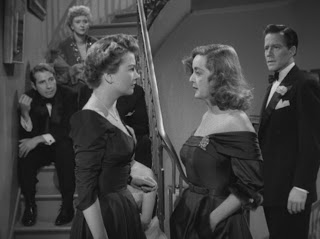 I love this movie.  All About Eve has been one of my all-time favorite classics for decades.  I own a DVD of it and have watched it more times than I care to admit.  But, as I got older, I began to notice that little difference.  It's as if Baxter had been styled to act opposite Colbert and, perhaps because of scheduling or whatever, didn't make the adjustments to match Davis' interpretation of Margo Channing.  Colbert was a champagne cocktail.  Davis was more "a martini, very dry."  Several martinis, in fact.  And cigarettes. 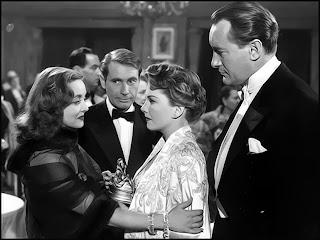 Bette Davis generated a different kind of heat than Claudette Colbert did.  They were different types of actresses in their long Hollywood careers.  Colbert played Cleopatra in 1934. 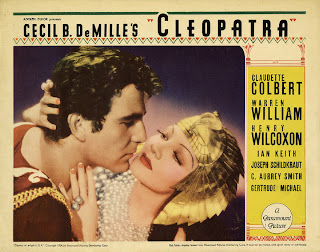 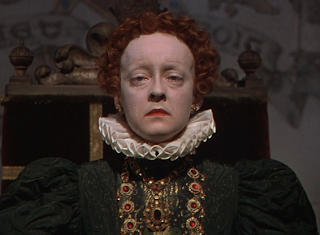 If Eve Harrington schemes to become a Davis-as-Margo clone and claw her way to Broadway stardom starting as her understudy, she probably should have looked more like a young Lizabeth Scott... 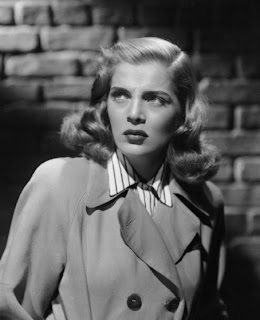 ...or the early Lauren Bacall.  Bacall did play Margo Channing in the hit Broadway musical version of All About Eve.  Bacall won a 1970 Tony Award for her performance in Applause and reprised the role in a 1973 CBS special presentation.  It co-starred popular TV actor Larry Hagman as Margo's boyfriend.  Hagman also sang. 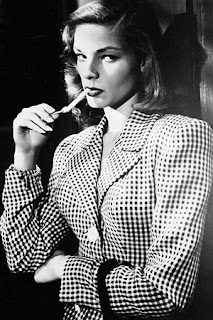 Claudette Colbert-as-Margo would've been a perfect set-up for Phoebe, the Eve Harrington clone already in replication progress.  The look would've been in triplicate -- Margo to Eve to Phoebe.  And, at the end, we see that there are many other Eves/Phoebes in waiting.  It's the visual warning from the images of Phoebe that Mankiewicz gives us in Eve's mirror. 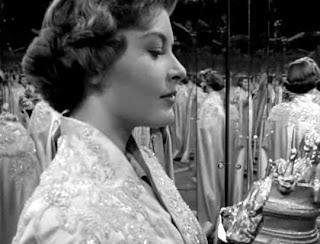 Claudette Colbert starred in 20th Century Fox's 1951 romantic comedy, Let's Make It Legal.  It has a bit of an All About Eve connection. 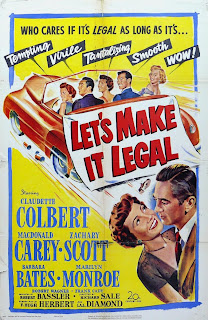 Barbara Bates (Phoebe in All About Eve) and Claudette Colbert were cast as mother and daughter in Let's Make It Legal. 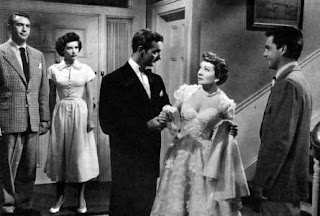 Also featured in the cast was Fox blonde and screen newcomer, Marilyn Monroe. 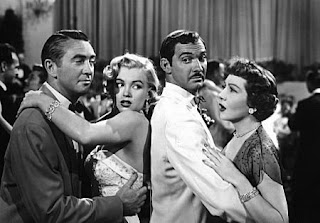 In All About Eve, Monroe had a bit part as Addison DeWitt's eye candy party date, Claudia Casswell.  Addison introduces her to hostess Margo like so:  "Miss Casswell is an actress, a graduate of the Copacabana School of Dramatic Art." 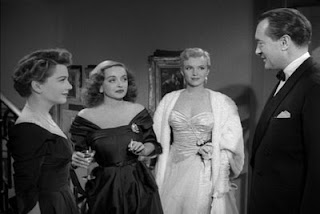 In just a few years, Marilyn Monroe herself would be a major Hollywood movie star getting top billing like Bette Davis and Claudette Colbert did.  All About Eve -- one of my favorite movies and Margo Channing is a role that Bette Davis was born to play.