"Do you remember me?" asked that sweet woman who smiled and gave me a warm hug in the green room of the Lifetime TV studios. By then, Dana Reeve had become just about as famous as her husband, actor Christopher Reeve.  The Superman movie star had been severely disabled due to a fall he suffered while horseback riding.  Dana's love for him continued to be stronger than any superhero.  America loved her for that. 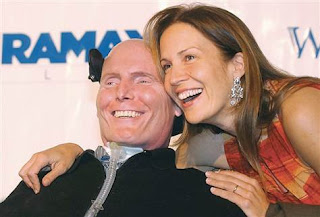 I will always be grateful to Heaven that I had the privilege to work with Dana in the year 2000.  Dana (Mrs. Christopher Reeve) and ABC's Deborah Roberts (Mrs. Al Roker) were the hosts of an ABC News/Lifetime TV live afternoon magazine show called Lifetime Live.  I was the show's entertainment editor.  Every Friday I came on to review new movies and give classic film history with a look at peak performances by strong actresses in old films.  That classic film women's history was my idea and Dana loved it.  When she greeted me on my first day at the studio with "Do you remember me?," she remembered an AIDS benefit we did together in the fall of 1992.  It was at a small Broadway area venue in New York City called the West Side Arts Theatre.  Dana (then Dana Morosini), Audra McDonald and Michael Cerveris were singers on the bill.  I was the show's host.  My partner and I had just started dating and he was in the audience.  He got to meet Dana after the show.  I did remember her.  I was surprised she remembered me.  She'd gone on to become "Mrs. Superman," earning her own national spotlight.  Fridays were my favorite day of the week in 2000.  I loved just being in her presence.  Dana Reeve made life better.

With the tragic accident that changed the everyday life of her marriage and career, no one on staff would've ever blamed her for occasionally coming to work in a bad mood or not being talkative before the show.  Dana was never like that.  I watched her take an interest in every single person on her staff.  She treated production assistants as if they were co-hosts.  She asked how you were.  She listened to your answers.  She made you feel significant.  Dana was gracious and grateful and talented.  About the AIDS benefit she and I did in 1992 -- ironically, two months later, my partner became one of the many people in New York City who needed AIDS care.  He passed in 1994 and Dana asked about that.  She asked how I was doing.  That was so kind of her.

One day, Dana was very excited about a Broadway show she was going to see.  It was musical version of the movie, The Full Monty.  She wanted it to be a big fat hit for the cast and company.  Come to find out, she could've been in it.  One of her dreams in life was to be in a Broadway musical.  She'd had a chance to do that show during its tryout in San Diego and it seemed certain that it would -- and did -- go to Broadway.  Dana told us that she knew she had a choice.  She could either do that show and make a show biz dream come true.  Or she could stay close to home and help take care of Chris.  She was telling this to two production assistants and me one hour before the TV show.  Dana said that, without regret, she chose Chris and she wished the absolute best for everyone in The Full Monty.  She continued, "The very next day, I got a call to host Lifetime Live."  One of her other dreams was to host a network TV show.  She flashed that fabulous smile of hers.  "The very next day."  I loved working with her -- and she was a terrific on-air partner.  I got to substitute for Deborah Roberts one day.  Dana was honest, hip and funny.  She shared the spotlight and had a great laugh.  She showed you how to get through life in a state of grace.  We seem to have returned to a time when one's worth is largely based on one's exterior, one's attractiveness.  Especially to some in the gay male community.  Kindness, compassion, dependability, honesty, humility, humor, loyalty...all seem to take a distant second or third place to a handsome face and a hot body.  We've all met guys who were like gift boxes in a department store window's Christmas display.  Great to look at but there there really wasn't anything on the inside.  Dana knew that looks aren't everything.  She loved Christopher Reeve for better or for worse.  At work, when she talked about him, you never would've thought he was paralyzed.  She always talked about Chris like they were just another typical married couple. 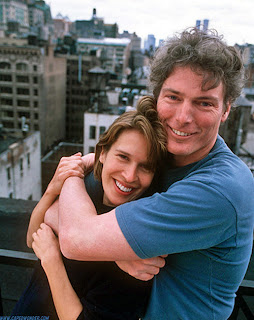 Lifetime Live was cancelled around the holiday season.  Dana called me at home and gave me the news. I was sad to hear it.  That was nothing compared to the shock and sadness in 2006 when I learned of her untimely death on March 6th.  I miss Dana Reeve.  I can totally understand how the late Christopher Reeve fell in love with her.  And I'm not surprised that she took a cruel break from life and made the best of it.  She added a great warm light to the world.  I'll never ever forget the gleam in her eyes and smile when she said "The very next day..."  Dana Reeve's life was a lesson in love, courage and hope.
at March 05, 2012