Hollywood and the White House

Some folks call it "nerd prom."

Over the weekend, the annual White House Correspondents' Dinner was held.  There were constant updates about it Saturday night on Twitter.  Most of the updates I saw contained photos of the celebrities in attendance -- Oscar winner Lupita Nyong'o, actress Diane Lane, Sofia Vergara from TV's Modern Family, Joel McHale from TV's Community and host of The Soup on E!, Julia Louis-Dreyfus, Jessica Simpson and there was a couple from the controversial reality show, Duck Dynasty.  It was like Red Carpet coverage for the Golden Globes.  Don't get me wrong.  Most of those I just mentioned are fabulous entertainers and celebrities.  But why exactly are they there with White House correspondents and getting more attention than the White House correspondents?

That brought me to a question I've asked for years now in regards to the press.  Who has more power in a press situation -- a president of the United States or Kim Basinger?

Here's what I mean:  Remember the Monica Lewinski scandal during the Clinton Administration?  When the story broke, I worked at Fox 5 in New York City.  One morning, when I was in downtown Manhattan's Union Square for a remote, a viewer and I chatted about the story.  She was a young mother with a child in a stroller.  We talked specifically about the press conferences.  We both grew up in eras hearing that politicians had "affairs" and that was it.  She said that she wants her children to pay attention to news but she turned the channel when her other child entered a room while she was watching the White House press conference.  Why?  Because the reporters were so graphic in asking about Clinton's alleged sexual act and the effects of his sexual release.  As a viewer, I was stunned at the questions involving residue, shall we say, on Ms. Lewinski's blue dress.  The Manhattan mom questioned if we, the public, really needed to know the graphic details or if reporters were asking sexually-charged questions to make themselves stand out in a moment on network TV.  Whatever the case, the questions were asked and answered by the White House Press Secretary.

The movie L.A. Confidential was soon to open.  I'd love it and saw it at a press screening.  I was invited to attend a small junket there in Manhattan in a swanky hotel and interview Kim Basinger, the actress who played the blonde damsel in distress.  A soiled babe in the L.A. woods, she's a hooker who gets clients because she looks like Paramount movie star Veronica Lake.  Basinger won an Oscar for this film work. 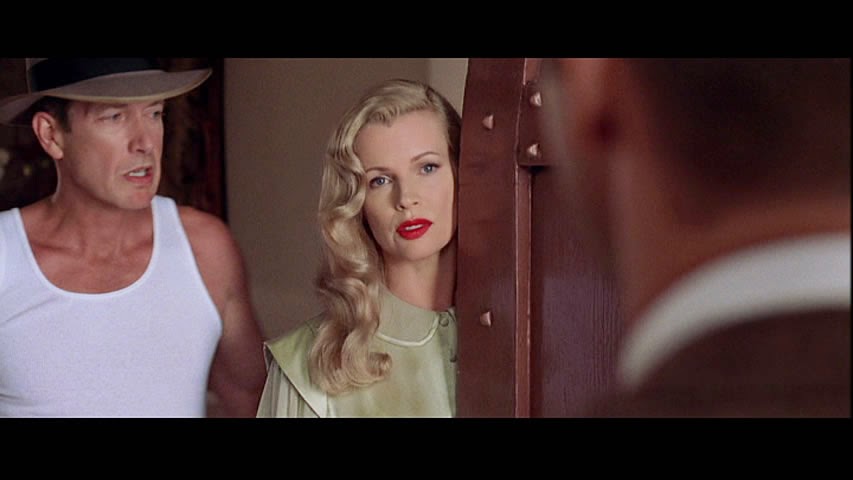 I was in a hotel "holding room" going over my notes and waiting to interview Ms. Basinger.  I was in the room with network morning news show co-anchor, Jack Ford. Jack was most gracious, very personable.  We chatted about work and the movie.  A publicist came into the room to let us know how things were moving along -- and to inform us that Kim Basinger would not be answering any questions about being an animal rights advocate and she would not be discussing her friendship with the late Lady Diana.

The publicist then left the room.  Jack and I both had "WTF?!?!" expressions on our faces.  A year later, reporters on network news broadcasts asked if the President of the United States had an affair and what sexual position he practiced.  But Jack Ford and I couldn't ask Kim Basinger if she'd ever had a craving for pork chops.

As someone who has done celebrity interviews for well over 20 years, I can tell you that wasn't the first time I've been in an entertainment press situation in which a publicist told reporters what couldn't be asked.  And reporters did not ask the questions because the publicist would halt the interview.  Celebrities do not have the thick skins politicians do.  Why are they getting the great tickets to the White House Correspondents' Dinner?  What about all the hardworking journalists and writers who toiled for years in the trenches and then got laid off due to the Great Recession?  How do they feel seeing reality TV show celebrities get a nice meal at a white tie journalism function while they're eating affordable fast food and still sending out resumés?  You can't blame the celebrities for attending.  Heck, if I was invited, I'd go too.

But, maybe to keep show biz from getting too cozy with our politicians and our serious journalists, they could do this:  Tell all the celebrities and their publicists that if they, the show biz celebrities, attend the White House Correspondents' Dinner, they agree to some interviews in which no questions are off limits.  Just like a White House press conference.

I know we're in a new era and we get our news a different way.  I grew up getting the news from anchors with journalistic skills and gravity.  Anchors like Walter Cronkite, Howard K. Smith, Peter Jennings, Max Robinson and Tom Brokaw.  Now, millions of young Americans prefer to get their news with laughs from a studio audience.  Look at how Jon Stewart brilliantly took over The Daily Show and made it his own  -- taking his comedian skills behind the desk to often ask harder questions of newsmakers than some journalists do.  It's a show with news, applause and a studio audience.  Just like the revamped Howard Beale newscast in the movie Network.  Stewart has had a major impact in how news is presented.  He's won several awards for his show. 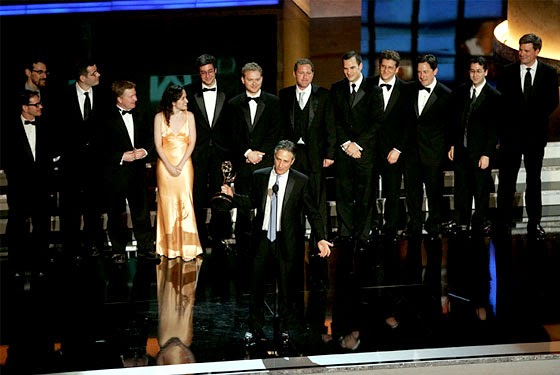 When friends ask if I saw or heard something about a news story, they don't ask if I saw it covered on a network evening newscast.  Those days are gone.  They ask if I saw the news item on The Daily Show or The Colbert Report, shows airing on the Comedy Central channel.  Award winning shows with predominantly Caucasian male teams of writers. 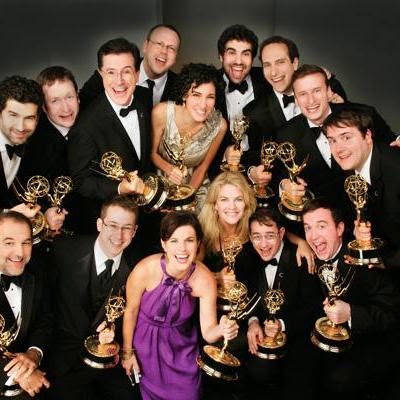 A lot of work goes into the President's speech for the White House Correspondents' Dinner.  It takes a lot of work because it's basically our president doing stand-up comedy.  I hope it doesn't go too far in years to come.  I'd hate to see this dinner morph into a Comedy Central roast with the President and First Lady making very special guest appearances.  I hope journalists remember that they're journalists and don't get dazzled, beguiled by show biz celebrities.  It seems like the press corps is making special places for actors, actresses and reality show celebrities -- people not tough enough to stand up to the kind of hard ball questioning correspondents throw at our politicians.

Just my opinion.  I'm not a hard news journalist.  I've just played one on TV.

Something extremely special happened at last night's dinner.  Reporter Henry McAlpin was posthumously honored.  Ever heard of him?  Mr. McAlpin was the first African-American to cover a presidential press conference.  This was during the administration of Pres. Franklin D. Roosevelt in 1944.  Mr. McAlpin, who went on to other accomplishments, died in 1985.

Reporter Henry McAlpin covered the Roosevelt and Truman presidencies but was never allowed to join and integrate the White House Correspondents' Association.  He was never invited to its annual dinner.  I hope Jessica Simpson and those two people from Duck Dynasty realize how lucky they were to get those invites.

To read or hear an excellent profile of Henry McAlpin which includes an interview of his son, go to the National Public Radio website at npr.org.

Thank you, journalist Scott Simon, for bringing the story of Henry McAlpin to our attention.

As for 1997's murder mystery L.A. Confidential  -- a modern-day classic co-starring Russell Crowe, James Cromwell, Guy Pearce and Kevin Spacey -- I still say that the biggest mystery of that superb crime thriller was how Kim Basinger was the only person in the cast to get an Oscar nomination.  I still can't figure that one out. 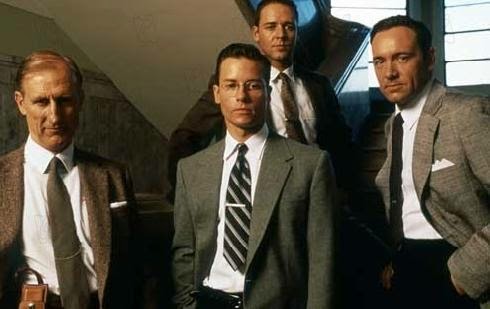