She should have an Oscar.  Dolly Parton is on the road, touring to promote her new album.  I want to hear it.  Heck, I'd love to see Dolly in concert.  She's the real deal. 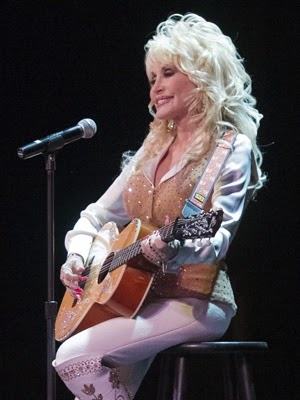 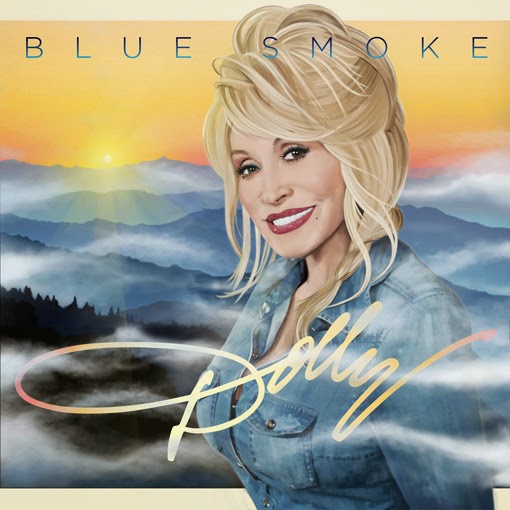 I've been lucky enough to interview Dolly Parton three times in my TV career.  The first two times were when I worked for the ABC TV affiliate in Milwaukee.  That was my first professional TV job.  I interviewed her for Milwaukee's edition of PM Magazine  when she was promoting her 1982 musical comedy movie, The Best Little Whorehouse in Texas.  My feature on her aired nationally.  The next time we talked, she was promoting her 1984 comedy with Sylvester Stallone, Rhinestone.  Here's a photo of us. 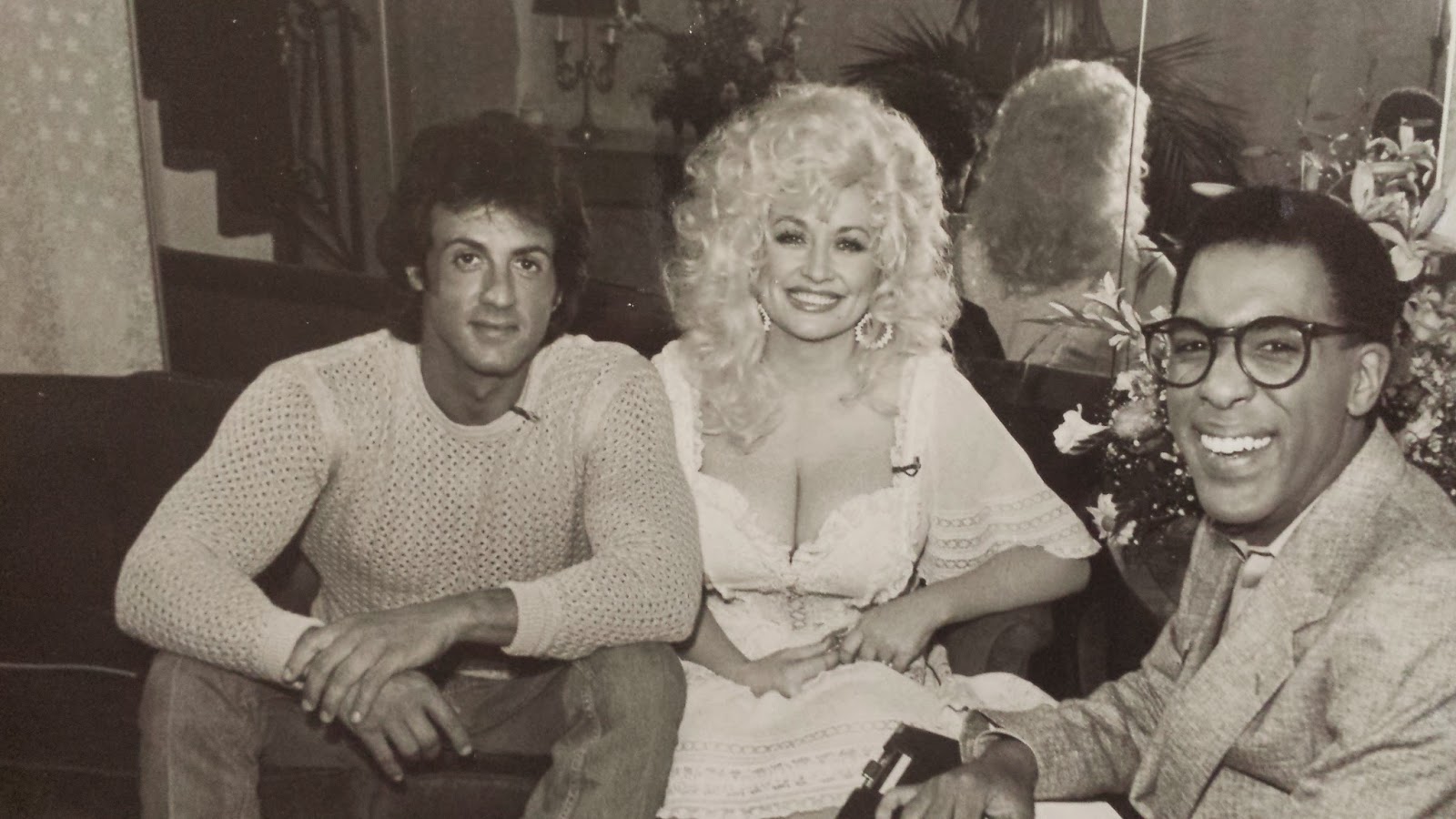 She is one of the smartest entertainers I've ever met, a shrewd businesswoman and one of America's most prolific and best  songwriters.  Consider her hits:  "Jolene," "Coat of Many Colors," "Here You Come Again," "Nine to Five" and "I Will Always Love You."  Dolly had a hit record singing her own composition with that lilting voice and then made even more money when Whitney Houston had a huge hit with her rousing rhythm and blues rendition of Dolly's hit.  To me, Dolly Parton is like the Johnny Mercer of country music.    She has a keen sense of herself and an equally keen -- and lightning fast -- sense of humor.

This portion of a Cosmopolitan magazine article will show you what I mean.  It's accurate.  I was present when it happened.  This is from the October 1989 issue of Cosmopolitan.  The article by Chris Chase was called "Sassy, Unsinkable Dolly." 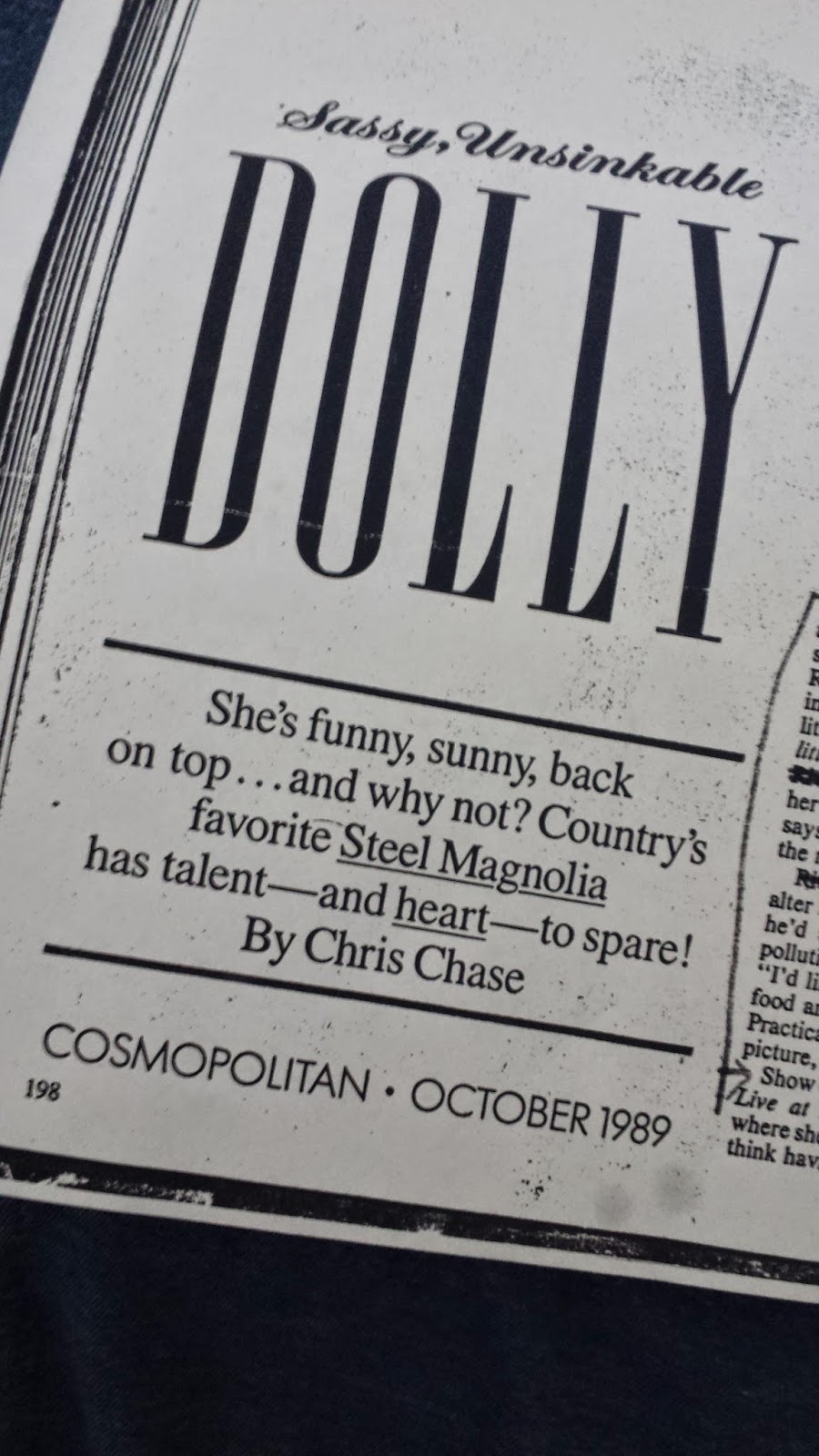 Dolly was back after taking some time off.  She took her recognizable look and spunky country attitude to movie with great success in Nine to Five.  The film version of the Broadway hit The Best Little Whorehouse in Texas followed.  Then she had a weekend variety show ABC.  She bought a West Coast home located in West Hollywood.  But, instead of letting Dolly be Dolly, the network made her over into sort of a modern day city slicker Mae West.  In its last few editions, Dolly went back to being herself.  The show was canceled.  Dolly came back, slimmer, and had a new movie coming out.  Steel Magnolias went to do extremely well at the box office.  Her new album, White Limozeen, was in stores and we were playing a Dolly Parton music video on VH1.

By the time I had my third interview experience with Dolly, I was on national television in New York City hosting a VH1 talk show.

So Dolly is in New York to push all of the above, and one of the first stops is the cable show of disc jockey Bobby Rivers.  On the air, Rivers quotes a lyric from "Why'd You Come in Here" about someone with "big ideas and a little behind."  "I've known you since I had little ideas and a big behind," whoops Dolly.  Rivers laughs and asks how long it takes to do her hair.  "I don't know how long it takes," says Dolly.  "I'm never there...my hair is in the next room."

Rivers wants to know what Dolly would alter if she ran the world -- Gregory Peck said he'd stop racism, Jodie Foster would stop pollution -- and Dolly thinks for a second.  Then:  "I'd like to see everybody with a bellyful of food and a houseful of furniture and a car."  Practical Dolly.  Let others consider the big picture, her eye is on the sparrow.

Dolly was truly that quick with her responses and answers.  She was always a terrific guest.

As for the Oscar?  I would have given her the Best Song Academy Award for "Travelin' Thru."  That's the wonderful tune she wrote for 2005's TransAmerica, the film that also got an Oscar nomination for Best Actress (Felicity Huffman).

Dolly lost the Best Song Oscar to "It's Hard Out Here for a Pimp" from Hustle & Flow.  That's showbiz.

I can't wait to hear both songs covered by Michael Bublé.

One more thing:  Back in the '90s, I took a vacation to meet my late partner's family in Tennessee.  During my vacation, we went Dollywood, her theme park in Pigeon Forge, TN.  Not only did I have some of the biggest fun ever on the rides, I would have gone back a second time just for the food.  Her theme park restaurant food was "smack yo' mama" good.  What a fabulous time we had.  To know more about it, go here:  Dollywood.com.