Marilyn Monroe, born on June 1st in Los Angeles. I have been fascinated with her ever since I was a kid watching her movies on TV. Critics in her day overlooked her versatility and focused more on her sex symbol status, but I saw her as a gifted actress who could make me belly laugh while watching GENTLEMEN PREFER BLONDES and HOW TO MARRY A MILLIONAIRE. Comedy is hard work. Musical comedy is even harder. Monroe made both look easy. 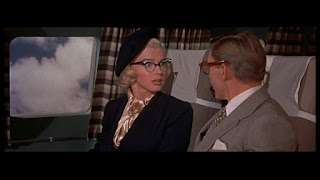 Marilyn Monroe had the gift and that gift was evident even early in her bit parts before she became an international movie star. Look at the men she acted opposite. She went from Groucho Marx (LOVE HAPPY) to Laurence Olivier (THE PRINCE AND THE SHOWGIRL) to Clark Gable (THE MISFITS). She's not eclipsed by their star power. She holds your attention as she works. Her sexiness was natural manufactured. She mixed it with a genuine warmth and delicious wit. 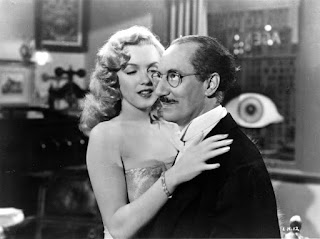 Monroe appeared in a drama with Barbara Stanwyck, 1952's CLASH BY NIGHT. Let me use Stanwyck performances to show Monroe's versatility.  Barbara Stanwyck was a master at playing the light and dark of the ambitious woman who was often outwitted the guys by being the smartest one in the room. Look at her as the unselfish, all-sacrificing mother determined to give her daughter a better life than she had in STELLA DALLAS. Then watch her as the Manhattan women's magazine writer who wants a raise and pretends to be a new mom as she concocts a Martha Stewart-like holiday article in CHRISTMAS IN CONNECTICUT. She's the married woman who'd like to see her husband dead so she could collect on some big insurance money in DOUBLE INDEMNITY. She hooks a man into helping her hatch her lethal plan. In the screwball comedy, THE LADY EVE, she's a card shark who plans to cheat a young millionaire out of some big money, but her plans change when she falls in love with him. 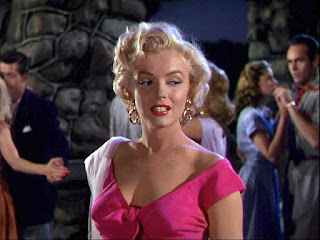 See Marilyn Monroe as Rose Loomis, the wanton wife in 1953's NIAGARA. Here the Fox contract player Monroe is ascending to stardom. NIAGARA is a noir thriller in lush color. It's the kind of story that would've been a black and white neo-realistic Italian film about dangerous obsession. Rose is the young and lusty wife of an emotionally disturbed war veteran with a rather hang-dog face. He's gripped by fits of jealousy. Rose has a handsome, young lover on the side. They're making plans to run away together. Monroe makes Rose's sexuality like Niagara Falls itself. It's a force that can't be lessened and contained. This disturbs the dangerous husband even more.

In 1955, Billy Wilder's THE SEVEN YEAR ITCH presents Marilyn Monroe in a star vehicle comedy based on a Broadway hit. Again, she's with a middle-aged man with a rather hang-dog face. He's married. But not to her. His wife and little boy have escaped the New York summer heat for a month and are away at camp. Monroe is The Girl Upstairs, a not exactly booksmart but totally lovable model and TV commercial actress. He daydreams of having an affair with her but he doesn't. He's too faithful to his wife. She tenderly jealous of the wife. She likes him. She reveals that what she really finds exciting is not the handsome macho man. She tells him she's drawn to the guy who's "kind of nervous and shy and perspiring a little...you sort of sense that he's gentle and kind and worried. That he'll be tender with you...That's what's really exciting." Her Sugar Kane will share the same sentiments after having late night supper with "Junior" in Billy Wilder's SOME LIKE IT HOT.

Marilyn Monroe was a stand-out at playing the showgirl and then getting deeper into the persona, playing the light and dark of it. There's her scene-stealing brief role as Miss Casswell in the 1950 classic, ALL ABOUT EVE. Theatre critic Addison De Witt (George Sanders) brings Miss Casswell to Margo Channing's party and introduces her as "a graduate of the Copacabana school of the dramatic arts." Follow that with Monroe's dumb-like-a-fox showgirl headliner role in GENTLEMEN PREFER BLONDES. Watch her as the patriotic American showgirl engaged in a game of comical sexual politics with a blustery and horny Eastern European regent in 1911. There are dramatic undertones. She overhears the regent's teen son plot with the Germany embassy. World War I will begin in 1914. This is 1957's THE PRINCE AND THE SHOWGIRL. She's a divorced and disillusioned showgirl in her last completed film, 1961's THE MISFITS written by Monroe's husband at the time, playwright Arthur Miller.

She was not a trained dancer like a Cyd Charisse or Leslie Caron, still Gene Kelly had high praise for Marilyn Monroe's work in dance numbers. He felt she moved like a dancer. Kelly had a cameo in Monroe's 1960 comedy with musical numbers, LET'S MAKE LOVE.

That brings me to her terrific performance in 1953's GENTLEMEN PREFER BLONDES. The word "iconic" gets tossed around a lot nowadays. Nevertheless, her "Diamonds Are a Girl's Best Friend" number is truly iconic. We saw how it was imitated by Madonna in the 1980s for her "Material Girl" music video. To me, Monroe gave an Oscar-nomination worthy performance in this 1953 delight. She didn't get one, but she should have. Her role as Lorelei Lee was originally mentioned for Fox's queen of the 1940s, Betty Grable. Grable, a Monroe buddy, co-starred with Marilyn in 1953's HOW TO MARRY A MILLIONAIRE, a comedy which utilized Monroe's talent for physical comedy.

Fox's GENTLEMEN PREFER BLONDES was based on the 1949 Broadway hit musical that put Carol Channing on the map. She played Lorelei Lee in the Broadway musical which was set in the 1920s. The movie fast forwarded the action to modern day. The story was adapted to fit its two stars, Jane Russell and Marilyn Monroe. Monroe's Lorelei Lee is a loyal best friend and a one-man gal.

For the movie, Broadway/film choreographer Jack Cole was hired. Cole danced with and choreographed Rita Hayworth numbers in TONIGHT AND EVERY NIGHT and GILDA. Many of his best numbers were heavy on jazz. The number's in Fox's GENTLEMEN PREFER BLONDES had a jazz flavor. Here is Carol Channing introducing "Diamonds Are a Girl's Best Friend" in the original Broadway cast production.


Here it is in the movie version with the song given a 1950's jazz arrangement and stylish, witty choreography from Jack Cole. His dance assistant who coached Monroe was Gwen Verdon.

Yes, Sir. Marilyn Monroe did some hard work -- singing, dancing and acting -- and make it all look easy in GENTLEMEN PREFER BLONDES. I still feel she should've been a Best Actress Oscar nominee for that brilliant 1953 musical comedy performance. The nominees were: