Let us praise the late, legendary Lorraine Hansberry. She made history in three areas -- three big areas -- that do not get the attention they deserve. Especially during Pride month on TV.

As you know, playwright Lorraine Hansberry was the first African American woman to write a play that was produced and performed on Broadway. The play was A RAISIN IN THE SUN. The story dealt with modern-day segregation in the Chicago area as we focused on an extended working class family that dreams of owning a home in a better neighborhood. A home with a front yard and a backyard. The title of the play came from a line in a poem by Langston Hughes. The poem is "Harlem."  Hansberry was 29 when A RAISIN IN THE SUN opened on Broadway in March 1959. 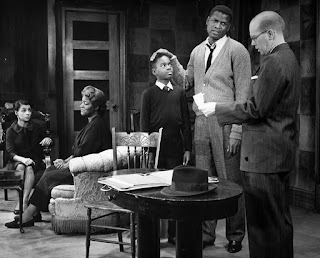 Those members of the original cast repeated their roles in 1961 film version from Columbia Pictures. It's pretty rare when original members of the cast of a Broadway hit get to recreate their performances for a Hollywood studio film adaptation. What's even more rare was seeing the name of a Black person under the words "Screenplay By."

In the Old Hollywood history of talking films, movies released by major Hollywood studios after 1927's THE JAZZ SINGER from Warner Bros., Black writers did not get equal opportunities. In 1939, the same year GONE WITH THE WIND was released, RKO gave the public a blessedly short, sentimental tale of pre-Civil War days called WAY DOWN SOUTH. The movie runs about 65 minutes and was made as a vehicle for a boy singer named Bobby Breen. The kid really did have a beautiful voice. With his natural, down-to-earth manner, he should've been in Warner Bros. features with Pat O'Brien or James Cagney as a boy from the wrong side of the tracks who possessed a sweet voice, ripe for radio popularity. Breen plays the son of beloved plantation master in WAY DOWN SOUTH. All the Black people who work on the plantation sing and dance, basically, because master has never and never will sell any of them. Black veteran actor Clarence Muse plays a butler in the big house. Muse co-wrote the WAY DOWN SOUTH screenplay with -- Langston Hughes. I kid you not. Their names are onscreen in the opening credits as writers. That was 1939.

You never saw the name of a Black woman onscreen in credits as a writer -- until 1961. 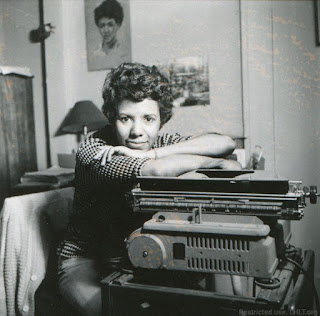 During Pride month a couple of years ago, TCM (Turner Classic Movies) aired films with an LGBTQ connection. That June, we saw films starring gay actors and films based on works by gay playwrights such as Edward Albee, Tennessee Williams and Harvey Fierstein. We saw the movies WHO'S AFRAID OF VIRGINIA WOOLF?, CAT ON A HOT TIN ROOF and TORCH SONG TRILOGY. I watched to see if there would be any Black representation. There wasn't. And there could have been.

Lorraine Hansberry was young, gifted, Black...and a lesbian. An out lesbian. To see Lorraine Hansberry's name on the big screen under the words "Screenplay By" in a top Hollywood studio release was a first. It's Black History, Women's History and LGBTQ History.

Lorraine Hansberry: Sighted Eyes/Feeling Heart is an excellent documentary on the late, great playwright/screenwriter and activist done for AMERICAN MASTERS on PBS. It's streaming free for Pride month. To see it, go to this link and then scroll down:

Here's a trailer for the documentary.