This is the classic foreign comedy that was remade by director Blake Edwards and became a 1982 box office smash bringing its star, Julie Andrews (Mrs. Blake Edwards), another Oscar nomination for Best Actress. Before I write about the 1930s movie, let me tell you that you'll appreciate it more if you've seen these three other classic films: THE RED SHOES (1948), Hitchcock's NOTORIOUS (1946) and CASABLANCA (1942). Now let's visit the original 1933 version of VICTOR AND VICTORIA. 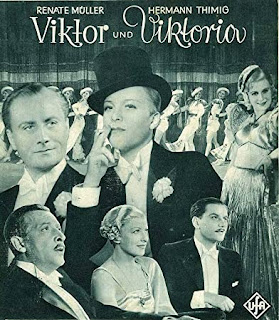 There are some mighty fine classic film available from KinoLorber.com. Check out that website when you have time.

KINO MARQUEE is an outlet of the company and, in these pandemic days, has Virtual Cinemas. I'll give you a link for that info at the end of this post. Kino Marquee has released "gorgeous restorations" of three foreign films for Pride month. These three films are being promoted as "Pioneers of Queer Cinema." The Virtual Cinema event for the NY Film Forum slated to start on July 3rd is -- 1933's VICTOR AND VICTORIA. It's a musical comedy in German with English subtitles. Kino Marquee didn't exaggerate. It is a gorgeous restoration.

It's an entertaining movie you should see if you're a classic film enthusiast.  First of all, it gives you a greater appreciation for the Blake Edwards remake. His version is even more inspired than we first realized. I consider 1982's VICTOR/VICTORIA to be a screwball comedy classic. Truly, it's an example of a remake outshining the original to which it's fairly faithful.

If 1933's VICTOR AND VICTORIA seems more light-hearted than some 1920s/early 30s German films you've seen, it was made in Germany during the waning days of the Weimar Republic. In other words, it was made before Hitler took control.

Like Julie Andrews in the remake, Susanne (Renate Müller) is an aspiring singer making the audition rounds. She's young, sweet and possesses a good voice. But she's having no luck. She's out of work and broke. She meets a middle-aged actor who's also making the rounds and also in need of work. He's a bit of a ham actor, yet he's a sweetheart of a show biz veteran. He knows the business and attempt to cheer Susanne up. "Everyone starts at the bottom," he says. He adds, some of it in song, "Dear child, just don't give up. One day in spring, luck will call at your door." Susanne wants to be "a star without any equal."

Blake's remake came out in the 1980s when gay America was coming out of the closet, not just in society but in popular entertainment whether in disco music via performers like Sylvester and The Village People or in movies like MAKING LOVE, PERSONAL BEST and SILKWOOD. There was also the out-of-work actor gender-bender hit, TOOTSIE. In 1981, Tony Randall played a gay widower in the unjustly forgotten NBC sitcom called LOVE, SIDNEY.

In the German VICTOR AND VICTORIA, the middle-aged actor who who befriends Susanne is heterosexual. He's a straight guy who occasionally did drag onstage for laughs as a lady of Spain. Making him gay in the 1982 remake (and played wonderfully by Robert Preston) opened up the story for more observations on sexual roles, gender images and sexuality.

At a Berlin cabaret one night, the older actor, Fritz, coaxes Susanne to do his lady in Spain drag routine. She does. The audiences love it -- and there's an agent in the audience. Unexpectedly, doing that routine was just the break she needed. However, the agent thinks she's really a young man who does great drag. She and the older actor friend keep her gender a secret because she's getting great bookings and they're making money. The secret is also kept in the Julie Andrews version co-starring James Garner. 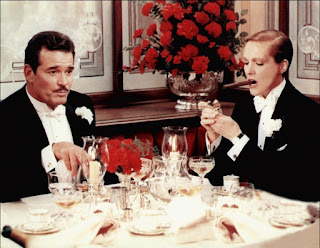 Susanne gets star billing as a revue headliner. Taking seats one night in the front row is Robert with his snooty blonde date. The Robert character was Americanized and played by James Garner in the remake. In the original, Susanne -- while still pretending to be a male -- is smitten with Robert. Robert is played by Adolf Wohlbrück. He was a dark, dashing, debonair and talented actor who got out of Germany and changed his name to ... Anton Walbrook. 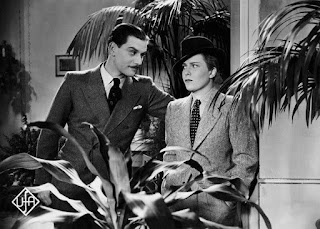 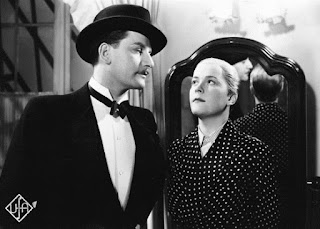 He went on to success in British classics. Most notably, he was Boris Lermontov, the head of the ballet company, in 1948's THE RED SHOES.

It's a damn good thing he got out of Germany. Walbrook was half-Jewish and gay. Take a look at this trailer.


In the original, Fritz has a crush on a chorus girl who has a crush on "Victor." She looks at Susanne onstage in drag and sighs, "Such a wonderful boy."  That chorus girl character is not in the remake. But Blake Edwards gave us one of the most refreshing and welcomed openly gay characters in a Hollywood film. He's "Squash" Bernstein, the tough and lovable bear of a bodyguard to the James Garner character. He's not just a bodyguard. They're friends. Rarely did -- or does -- Hollywood give us a straight/gay male friendship. Bernstein was played delightfully by former NFL star, Alex Karras.

1933's VICTOR AND VICTORIA was written and directed by Reinhold Schünzel. Starting his career in the silent film era, he was an actor and a director. He directed a couple of MGM releases for 1939. One was a Joan Crawford turkey called ICE FOLLIES OF 1939. Reinhold Schünzel had a key supporting role in the classic Alfred Hitchcock film, NOTORIOUS, starring Cary Grant, Ingrid Bergman and Claude Rains. Schünzel played the Nazi dinner guest who almost drank the poisoned coffee. 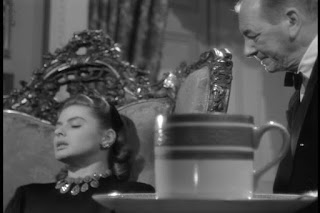 He acted in a bold 1919 silent film, also made in Germany. DIFFERENT FROM THE OTHERS is about two men, classical musicians, who fall in love with each other. A blackmailer, who seems to be in the closet, casts a cold shadow over the relationship. Schünzel played the blackmailer. Starring as an openly gay man in love was actor Conrad Veidt. By the way, you see same-sex couples dancing in this 1919 foreign film. There's a bit of a similar plot in the groundbreaking 1961 British film, VICTIM, starring Dirk Bogarde. Conrad Veidt would become known to millions of moviegoers as the main villain, the Nazi Major Strasser, in CASABLANCA. 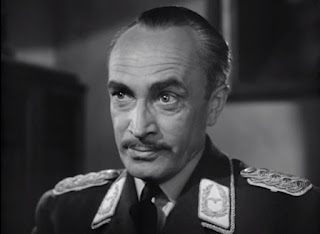 Veidt played a respectable homosexual and, off-screen, he was married to a Jew. He had to get the hell out of Germany too. And there you have it.

For more information on the PIONEERS OF QUEER CINEMA Virtual Cinema presentation of 1933's VICTOR AND VICTORIA, click onto this link: