One of the most terrific trios of talent brought together for work in Hollywood musicals was Fred Astaire, Ginger Rogers and Hermes Pan. Pan not only became close, longtime friend to Astaire, he was Astaire's top choreographer and collaborator. If you believe in reincarnation, you'd surely feel he and Fred were partners in a previous life. For two men who were unrelated, they looked like they were brothers. 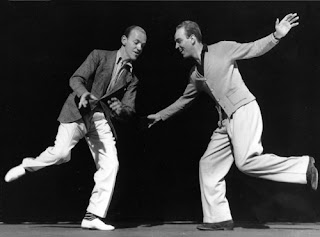 Whereas Gene Kelly had an affinity for the ballet, Astaire had ballet training in his youth but preferred Black music and a swing/jazz beat. So did the man Astaire referred to in his autobiography as "Pan." Hermes Pan. The Tennessee-born son of Greek immigrant dad and a Latina mom. He moved to New York City with his family when he was 14. I heard from a Debbie Reynolds friend that Pan loved Harlem. He, Astaire and Rogers were Broadway veterans before they worked together in Hollywood.

Hermes Pan choreographed the dance numbers in the classic Fred Astaire and Ginger Rogers RKO musicals of the 1930s. Astaire, Rogers and Pan teamed up to make original movie musicals such as TOP HAT, FOLLOW THE FLEET, SWING TIME and SHALL WE DANCE -- all with new songs and new dance numbers. He choreographed numbers for Fox musicals in the 1940s and went from behind the camera to in front of it dancing with Betty Grable and Rita Hayworth. Here's Astaire and Rogers dancing to a song they introduced, "Pick Yourself Up," in their 1936 classic, SWING TIME. Music by Jerome Kern and Dorothy Fields.


FOLLOW THE FLEET (1936) had an original score by Irving Berlin. Here, Astaire and Rogers dance to "Let's Face the Music and Dance," a number that was visually referenced in 1981's PENNIES FROM HEAVEN and 2017's THE SHAPE OF WATER.


Fred Astaire and Hermes Pan are in 1968's FINIAN'S RAINBOW. That film marked Astaire's last appearance in a big screen musical. Pan did the choreography. The two appear together briefly during "When The Idle Poor Become The Idle Rich," a number sung and danced by Astaire with chorus dancers. Astaire as Finian sits in a barber's chair when we see them. 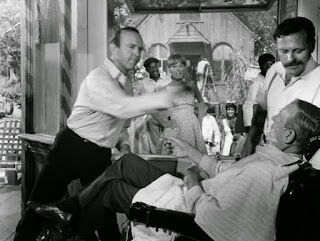 The two men danced together only in one film, a 1940 Paramount musical called SECOND CHORUS. Astaire plays a swing band musician and vocalist who, of course, can dance. Johnny Mercer co-wrote the songs. Paulette Goddard was the leading lady -- and she partnered with Astaire for "I Ain't Hep To That Step But I'll Dig It."

There was another song and dance number. Astaire's partner was -- Hermes Pan! But "Me and the Ghost Upstairs" was deleted from the final print. Here's the deleted number with Pan dancing under a sheet as the ghost. Notice the women's shoes Hermes Pan is wearing. Click onto this link to see it:

In my opinion, that deleted number shows us that we should revise a popular old quote.  The updated revision should be:  "Ginger Rogers -- and Hermes Pan -- did everything Fred Astaire did, only backwards and in heels." 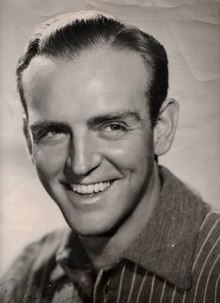