The First Amendment and Films I Recommend

This is another week of heartache and national grief.  This morning, we awoke to the news that there has been another mass shooting in America. People were killed in a popular social center bar/nightclub in Thousand Oaks, California.  I grew up in Southern California.  In my youth, I knew Thousand Oaks to be a quiet, arid community. Apparently nothing had changed in all the decades since -- until now. The country music bar and grill in Thousand Oaks was frequented by college students. On KNX Radio out of L.A., I heard a Thousand Oaks resident cry and say that her community had always been "a safe haven." This is the worst mass shooting in America -- in 11 days.  We haven't yet dried all our tears from the Pittsburgh synagogue shooting, a crime motivated by anti-Semitism. November 9th, by the way, marks the dark anniversary of Kristallnacht, a wave of hate against Jews in 1930s Germany.

Heaven help us.  Something...something has to be done to stop this.  Our national leader does not seem to care about this.  Mass shootings are becoming as American as apple pie, yet he remains loyal to the NRA.

About our leader -- did you see yesterday's press conference?  He mocked Republicans who lost in the midterms, claiming that they lost because they were not loyal enough to him. He verbally insulted and bullied reporters. The White House pulled the press pass of CNN reporter, Jim Acosta. A black female reporter asked Trump about declaring himself to be a "nationalist," which he did in a rally. She asked the important question about the racist undertone that being white and calling one's self a "nationalist" may have. He interrupted and accused her of asking him a "racist question."  Remember that he's the man who called Mexicans "rapists and murderers." 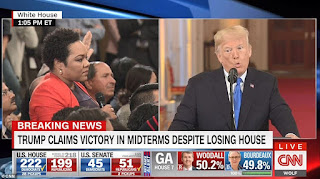 Today, veteran network reporters are commenting on how yesterday's presidential behavior was far worse than anything experienced when Nixon and Reagan were grilled with extremely tough press questions that held them accountable. And those presidents never had a press pass pulled.  Yesterday's pulling of a national reporter's press pass was something shockingly new. And this happened from a president who took office without prior political experience. He was the egomaniac real estate millionaire who became a popular reality game show host on network TV. 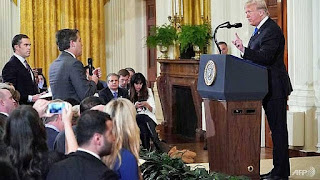 In the 1980s, Steven Spielberg's THE POST would have caused a lot of buzz and, I feel, it would have done quite well at the box office. But today, movie screens have been dominated by follow-ups featuring comic book superheroes.  I paid to see THE POST in 2017. The audience applauded during it and at the end.  I watched it twice this week on HBO.

Donald Trump seems to have the same regard for our Constitution that he would have for a fast food restaurant napkin.  Yesterday's press conference was him wiping his greasy fingers on the First Amendment.  The Marvel Comics characters have made enough money.  See something about non-caped characters.  Real life people at work, in journalism, who did the hard work even when threated with imprisonment.  They stood up for Freedom of the Press. They stood up for the Constitution.

See Tom Hanks and Meryl Streep as newspaper co-workers who realized they had to set aside the fluff celebrity pieces and acknowledge that American liberties were at stake.  Watch THE POST, a very fine and very important film that did not get nearly that amount of moviegoer love that it should have.
As the drama in THE POST ends, we see burglars break in at The Watergate Hotel.  The Washington Post was faced with another political crime from the same White House administration, the administration of President Richard M. Nixon, in the same decade. To Nixon, the press was his "enemy."

After you watch THE POST, see Dustin Hoffman and Robert Redford in Alan J. Pakula's 1976 classic, ALL THE PRESIDENT'S MEN. This movie opens where THE POST ends.
In both of these true stories, we see women and men who did the hard, the unglamorous and grueling work of a free press.  I happen to feel that a free press is a sharp golden sword in our great democracy.  The current administration wants to dull that blade.

THE POST and ALL THE PRESIDENT'S MEN.  These films are relevant and timely. They remind you that our freedom of the press is vital and that it is at stake.  Yesterday's White House press conference alone was visual proof of that.
at November 08, 2018