Infiltrate Hate. Did you see the Spike Lee film BlacKkKlansman? It's based on a true story, which may seem hard to believe when you see it. It's now on DVD. Ron Stallworth, who was interviewed by Scott Simon on NPR earlier this year, was a police detective in a Colorado city in the 1970s. He's African American. The intelligent, ambitious, young black cop infiltrated the KKK. He even got a membership card. Stallworth started his infiltration on the phone. He didn't "sound black," so the KKK representative couldn't tell he was having a phone conversation about white supremacy with a black man. There's a local Colorado branch planning race war violence. With the help of a Jewish fellow police officer, Stallworth goes undercover. Both cops come in direct contact with national KKK leader David Duke. Both come in contact with racism within the police force. The source material for this gripping, powerful film is the 2014 memoir, Black Klansman, by Ron Stallworth. 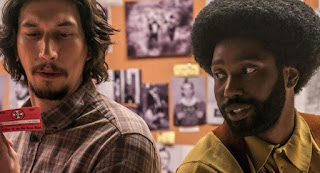 A black man in Colorado winds up being the police bodyguard to visiting KKK leader David Duke. You have to see how this happened.  There are two forces at play. There's the White Power of the Klan and there's the Black Power movement emerging because a new generation is ready to beat down decades of racial oppression and violence from the White Power movement. 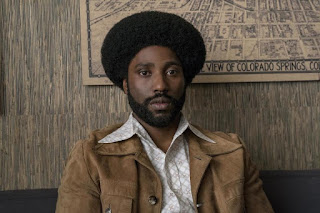 This White Supremacy action has not all been hooded and in the dark. It was highlighted as heroic in D.W. Griffith's famous and infamous 1915 box office hit, THE BIRTH OF A NATION. In Griffith's widely popular epic film were offensive black images and stereotypes that still infuriate today. And that film was an early Hollywood blockbuster. Dr. William Shockley was an American physicist who won a 1956 Nobel Prize for Physics.  Dr. Shockley shattered his reputation later when he publicly made the racist claims that the Negro is genetically, intellectually inferior to the white man. There was Brown v Board of Education. The Supreme Court had to declare school segregation unconstitutional. These facts come up in BlacKkKlansman.

In his long and internationally celebrated film career, director Spike Lee has never, ever been nominated for the Best Director Oscar.  If he does not get a Best Director Oscar nomination for BlacKkKlansman, there is seriously something wrong with the Academy. This is one of the top films of 2018 and one of the best films of his career.

And you did read that correctly.  Spike Lee directed DO THE RIGHT THING (1989), JUNGLE FEVER (1991), MALCOLM X (1992), the documentary 4 LITTLE GIRLS (1997), SUMMER OF SAM (1999), and INSIDE MAN (2006)…to name of few of his joints (productions). He's directed actors to Oscar nominations -- Denzel Washington for MALCOLM X and Danny Aiello for DO THE RIGHT THING. He's acted in films he directed and co-wrote -- SHE'S GOTTA HAVE IT, DO THE RIGHT THING and MALCOLM X, for example.

But unlike actor/directors such as Woody Allen, Kevin Costner and Mel Gibson, Spike Lee has never, ever received an Oscar nomination for Best Director. The Academy bestowed him with an honorary Oscar.

You'll be disturbed to feel that the racist poison the cops try to stop in the 1970s has surfaced and spilled out again in modern-day America. In the movie, we know that it's not like DR. STRANGELOVE, FAIL-SAFE or SEVEN DAYS IN MAY. It's not a case of "it could happen here." The last ten minutes slap us hard in the face with the grim American reality that it did happen here just a year ago. Spike Lee holds a mirror up to this age of "Make America Great Again."
John David Washington, with his fierce full moon-shaped Afro, plays Ron Stallworth. John David is the son of Denzel Washington.  John David did his daddy proud. Adam Driver should be in the Oscar race for his performance as Flip Zimmerman, the Jewish cop who goes undercover with Stallworth. I cannot think of another actor who could've played that good role better than Adam Driver did. He is like the lovable and versatile Greenberg, a member of the Polish acting company in the 1942 Ernst Lubitsch classic, TO BE OR NOT TO BE. The troupe of players in the WW2 comedy outwits an audience of Nazis. In the theatre lobby, Greenberg is surrounded by the harshest critics he could ever face. He's surrounded by Nazis. The actor outwits and escapes them by performing Shylock's speech from Shakespeare's THE MERCHANT OF VENICE. The Nazis are clueless to Shakespeare. Flip Zimmerman, like Greenberg, is surrounded by some of his harshest critics -- Jew-hating klansmen who don't realize he's really a Jew. The cop has to be an actor, totally in the moment, to outwit them and escape their circle of evil. Flip pretends to be Ron Stallworth and meets to fill out his application for klan membership. 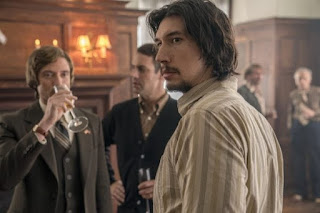 Spike Lee co-wrote the screenplay with the amazingly talented Kevin Willmott.  Willmott, also a black man, is a professor of film at the University of Kansas. He wrote and directed a mockumentary about race that is just genius and wickedly, brilliantly funny.  It's a 2004 production called C.S.A.: THE CONFEDERATE STATES OF AMERICA.

It's an account of alternate history if the South had won the Civil War. This "documentary" is done by a British TV crew and aired on a Northern California PBS-like station.  Everything -- station IDs, local commercials, classic film clips, interviews -- everything is done is if we live in the Confederate States of America.  It's like if Woody Allen's ZELIG meets the Key & Peele and Dave Chappelle comedy shows we saw on cable's Comedy Central. Classic film fans will marvel at Willmott's twist on film history and his knowledge of it.  In this mockumentary is a scene from a silent D.W. Griffith film in which we see Abraham Lincoln, in blackface, caught trying to flee on the Underground Railway.  It looks exactly like actual footage from Griffith's THE BIRTH OF A NATION. There's a classic 1940s film in which an obviously British and white actor is in blackface seriously playing a Southern plantation butler. It's laughable.

C.S.A.: THE CONFEDERATE STATES OF AMERICA had me laughing so hard my sides hurt.  The reviews for it were terrific.  When I worked on-air with Whoopi Goldberg on her national weekday morning radio show out of New York City (from 2006 to 2008), I got a DVD copy, gave it to her, and enthusiastically suggested we do a phone interview of Kevin Willmott for a segment on the show. I'd contacted him, highly praised his work, and asked if he'd be open to doing an interview if she agreed to it.  He was most gracious, very grateful and quite open to the idea of an interview.

For some reason, Whoopi was not as enthusiastic as I was.  I was frustrated and disappointed that I couldn't give him some national exposure in 2006/2007 and introduce listeners to this gifted black talent.

Whoopi's radio show got canceled.  Kevin Willmott went on to co-write screenplays with Spike Lee. His BlacKkKlansman was recognized, praised and honored at the Cannes Film Festival this year.  Screenwriter Kevin Willmott could wind up getting an Oscar nomination early next year.

I wonder if Whoopi has seen the movie. She should. You should too.