Josh Groban, So Good as THE GOOD COP

Have you heard him sing?  Oh, my Sweet Baby Jesus. He's got the gift. If we were in the 1940s and 50s when Hollywood studios still reigned and gave us movies starring performers they had under contract, Josh Groban would've been snatched up in a heartbeat by a major studio like MGM, Paramount or 20th Century Fox. He'd have been cast in some original musicals and top songwriters of the day would've have written new tunes for him to introduce the way they wrote new tunes for Fred Astaire, Bing Crosby, Danny Kaye, Frank Sinatra and Dean Martin. He would've introduced songs that would become new entries in the Great American Songbook of standards.  He's that good.  Netflix now really makes me sad the old classic Hollywood studio system no longer exists to make Josh Groban a star. Why? Because a new series on Netflix stars Josh Groban and it's a winner.  It's not a musical. It does, however, display his smooth, solid acting chops and appealing character. Crimes are solved in a smart, sophisticated series called THE GOOD COP.  Josh plays the good cop.  He wears glasses and affordable business attire. He looks like your typical bookworm. He plays by the rules. Always. 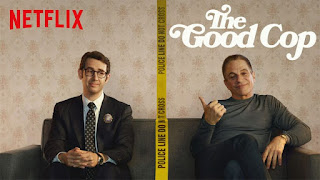 The same cannot be said of his roommate. His roommate was a cop who got into a little trouble and had to do some time behind bars. This older cop is the father to Groban's young cop.  Tony Danza, in mighty fine form, plays the hipster dad who wishes his obsessive son would loosen up a bit.  But, deep down, dad is quite proud of his brainy cop son.  They live together in a borough outside of Manhattan. Just a couple of working class men -- solving murders.  If THE GOOD COP had been a traditional network TV series back in the days of TWIN PEAKS, MOONLIGHTING, HILL STREET BLUES and NORTHERN EXPOSURE, it would have been a hit.  It's inventive, original, funny, well-played and very entertaining.  It's hip without trying to be hip. It's has a jazzy score, atypical for a cop series but perfect for the tone of this show. It fits the characters. 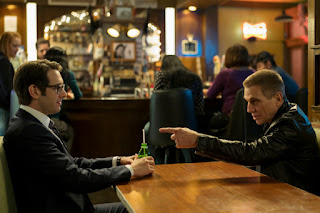 Here's a taste of the different kind of crimefighting team you'll see on THE GOOD COP.
The third episode features actor John Carroll Lynch as an ex-boxer framed for murder.  You've seen John Carroll Lynch a lot but may not know his name the way you know a Tom Hanks or George Clooney.  Lynch played the husband opposite Frances McDormand in FARGO, he was the large and intimidating suspect in ZODIAC and he creeped you out as Twisty the Clown on TV's AMERICAN HORROR STORY.

I was drinking coffee, home alone on a Saturday night, as I watched the episode. I did a forceful DTST (Danny Thomas Spit Take) with a mouthful of coffee, belly laughing at an unexpected entrance the big ex-boxer made to get some advice from the cop dad.

That episode took me back to when I had fun staying in on a Saturday night to watch some good TV shows. This is an excellent vehicle for Josh Groban. Veteran TV actor Tony Danza delivers again.  There's nice chemistry between the two lead actors. Oh! And the open of the first episode is wonderful. Beautifully written. The whole dynamic in the relationship between father and son is realized as we see them in a car at a stoplight that's out of order. I hope this show gets an order for more episodes.  It's on Netflix. I totally dig THE GOOD COP.
at November 10, 2018