When first I read that Disney planned to make a new Mary Poppins adventure, I wasn't exactly thrilled. Why? Because Disney has been making sequels to its animated classics -- like LADY AND THE TRAMP 2 and BAMBI 2 -- and live-action adaptations of animated classics.  A live-action DUMBO and THE LION KING are in the wings and waiting to be released. Why doesn't Disney delve into previously untouched fairy tales by Hans Christian Andersen and The Brothers Grimm instead of making pleasantly forgettable animated sequels and less colorful live-action remakes of their animated classics? Then I read that Emily Blunt had been cast as Mary Poppins. Then I saw its first trailer for MARY POPPINS RETURNS. It opens a week before Christmas.  The sight of Emily Blunt as Mary Poppins won me over instantly. I especially loved her hat. 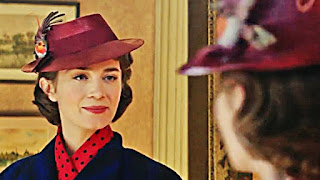 Disney is the parent company to ABC.  Recently, ABC aired a prime time news special devoted to MARY POPPINS RETURNS. Emily Blunt, Lin-Manuel Miranda and Dick Van Dyke were interviewed. They're stars of the new Disney production.  Dick Van Dyke, now in his early 90s, starred in the 1964 original film with Julie Andrews.  I'm an Emily Blunt fan.  As for Lin-Manuel Miranda, his casting in MARY POPPINS RETURNS fills me with glee.  If kids embrace this feature, he'll be a beloved new member in Disney's family of characters just like we kids took to Dick Van Dyke in MARY POPPINS. And we were so young and enchanted by the movie that we had no idea his Cockney accent sucked.  All we knew was that Dick Van Dyke made us happy. Lin-Manuel Miranda could soon hold a very dear place in the hearts of children. 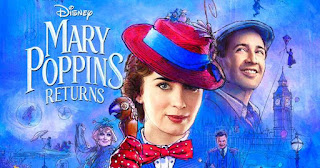 The prime ABC News special, of course, had a few short clips. We heard some of the new songs written for the film.  MARY POPPINS took home a Best Song Oscar for "Chim Chim Cher-ee." Screen newcomer Julie Andrews won the Oscar for Best Actress thanks to Disney's revolutionary fantasy/musical. That unique and complicated marriage of live-action and animation was supremely entertaining and the result of painstaking work, discipline and artistry. Andrews had to learn new songs, choreography with special effects, and act. MARY POPPINS was her first film.

On Twitter, a critic named Jason Bailey wrote:  "MARY POPPINS RETURNS is like a sweaty birthday clown, working its hardest to create lightness and mirth, conveying only desperation..." 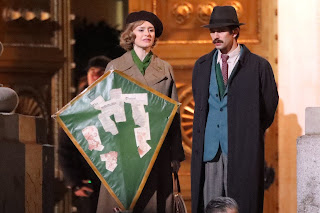 When millions of us baby boomers were school kids, remember where we were emotionally the weekend of November 22nd, 1963? The youth and vigor and civility of President John F. Kennedy was horribly taken away from us. He was assassinated in Dallas, Texas on Friday, November 22nd. Two little children suddenly left without a father. A lovely young wife suddenly widowed. A White House family shattered. A nation shattered. Before the weekend ended, the man taken into custody as the assassin -- Lee Harvey Oswald -- would be shot and killed. The world seemed to be spinning out of control in the dark.  The whole country felt helpless, hopeless, and paralyzed with grief. President Kennedy's funeral, nationally televised, was the stuff of legend with majestically heartbreaking visual images that would sear into our memories.

In August of 1964, when kids were still on summer vacation, MARY POPPINS opened in exclusive engagements. It not only became a box office champion, it helped us heal. Parents could take kids to see it -- and we all could feel that it was alright to smile and laugh again.  We needed the cheerful, compassionate "Carry On" attitude of Julie Andrews.  We little kids could connect to the Banks children in MARY POPPINS. We understood how they felt. We not only needed some magic in our lives, we believed in magic. 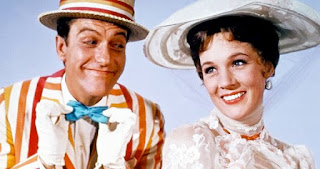 We are still the Banks children. But older. We've loved. We've lost loved ones. We've lost jobs. Some of us lost our homes. We worked hard. We sacrificed for family. We were good. We were responsible. But our wishes still didn't quite come true. We've known disappointment, disillusionment and heartbreak. For many, our young sense of magic was repeatedly slapped out of us by the harsh realities of life and getting older. How many of us need a hug that we don't get? A kind word of encouragement that we don't hear?  How many of us just need a break? We want our sense of magic restored. We need some magic again.
Yes. I want to see MARY POPPIN RETURNS. Will Emily Blunt be the second woman to get a Best Actress Oscar nomination for playing Mary Poppins? We shall see. Will this follow-up win the Oscar for Best Song like the original film did?  I think Marc Shaiman and Scott Wittman have a strong chance to be Best Song Oscar winners.  Here's one of their original numbers for MARY POPPINS RETURNS. Emily Blunt sings "The Place Where Lost Things Go."
MARY POPPINS RETURNS opens December 19th.
at November 26, 2018