Like Sidney Poitier, Beah Richards made Hollywood history with her great skills as an African American performer.  The Oscar nominees for Best Supporting Actress of 1967 were Estelle Parsons for BONNIE AND CLYDE, Katharine Ross for THE GRADUATE, Carol Channing for THOROUGHLY MODERN MILLIE, Mildred Natwick for BAREFOOT IN THE PARK and Beah Richards for GUESS WHO'S COMING TO DINNER. 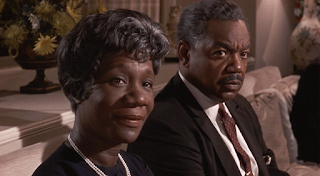 Ms. Richards made history as one of the few African American women who had been nominated, at that time, in the category.  I think she may have also made history as the first black actress who had key roles in two of the five films nominated in the Oscar category for Best Picture.  In both films, she had scenes with lead actor Sidney Poitier.  In GUESS WHO'S COMING TO DINNER, she plays the Los Angeles mother of the distinguished widower doctor who has found love again after years of grief over the tragic loss of his wife and little boy.  The surprise is that the doctor's fiancée is white. 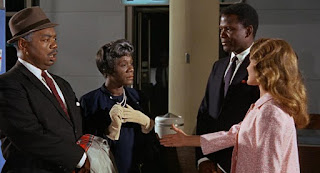 The L.A. parents have flown up to San Francisco to meet her and her parents.  The fiancée's parents are played by Katharine Hepburn and Spencer Tracy. I wish Beah Richards had been given the opportunity to be in another film with Katharine Hepburn. The two actresses bond so well in the film as women who bless the union of their children but are hurt with the opposition to the marriage that comes from their husbands.  Richards gives a beautiful performance.  It's not a showy role yet the complicated feelings and the emotions that wash across her face are done with such effortlessness that they almost seem subliminal.  At first Mrs. Prentice is shocked at the airport when she meets her son's fiancée and sees that she's white.  In the next scene, notice her face as she and John's father sit in the back seat as Dr. John Prentice sits up front.  His fiancée is driving.  Mrs. Prentice's face has gone from shock and concern to tenderness.  She looks at John, realizing that his long-broken heart has healed. 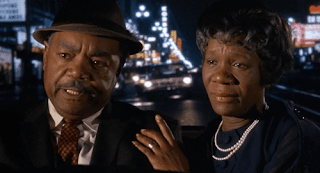 At the home of the Draytons in San Francisco, it's not just a meeting of different races but also of different classes.  John's father is a retired mailman in L.A.  San Francisco, in Northern California, often came off as being tonier and more cultured than Los Angeles in Southern California.  The Draytons are very well to do.  He's the owner of a newspaper, a prominent newspaper that's known to champion social issues.  Very liberal. 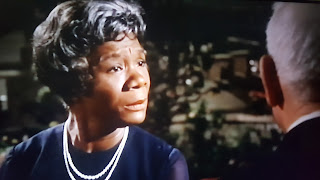 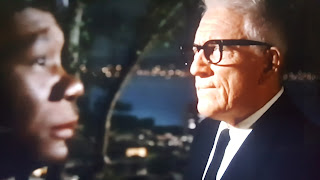 Sex is touched on in this film.  Keep in mind that, as John's gruff father states, interracial marriage is still illegal and a crime in several American states. (The Supreme Court would change that in a year.)  Joanna confides to her mother (Hepburn) that she and John have not been sexually intimate.  John wanted to wait until after they said "I do."  In a scene that I bet clinched Beah Richards getting an Oscar nomination, Mrs. Prentice truthfully calls out Mr. Drayton (Tracy) on his opposition to the marriage.  She's aware that society may not be ready for an interracial marriage. John and Joanna would surely have to deal with some bigoted attitudes.  But Mrs. Prentice tells him that her husband, whom she dearly loves, and he have forgotten what being fully in love like this is like.  That most men forget those feelings as they get older and sexual desire decreases.  That scene is a major heart and a highlight of the movie.  Beah Richards, a veteran of Broadway and film, did a lot of TV.  Like several black actresses, TV gave her more work opportunities than Hollywood did after she received an Oscar nomination.

In Norman Jewison's IN THE HEAT OF THE NIGHT, a murder mystery and race drama set in the Deep South, Beah Richard's is a totally different character.  She's not genteel and loving like Mrs. Prentice.  She's hard and has no love for the white people who treated her as an inferior.  She's Mama Caleba, a woman who performs backroom abortions.  She has a disdain for Detective Virgil Tibbs (Poitier), feeling that he sold out working for the white man.  Tibbs has to cut through this racial humiliation from one of his own to get to vital information in solving the case.  He can instantly turn her disdain and disrespect into fear by hitting her with the reality of jail time for doing the secret work she does on white women if she does not comply. 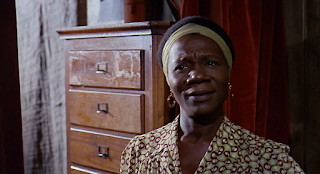 IN THE HEAT OF THE NIGHT won the Oscar for Best Picture of 1967.

With her nomination, Beah Richard was the fourth African American woman in history to be up for the Best Supporting Actress Oscar.  She followed the groundbreaking Hattie McDaniel, winner for 1939's GONE WITH THE WIND, Ethel Waters in 1949's PINKY and Juanita Moore of 1959's IMITATION OF LIFE remake.

She was the first nominee whose character was not seen as a domestic.  When Stanley Kramer's GUESS WHO'S COMING TO DINNER ends, it ends with a scene that you never, ever would have seen at MGM during Tracy and Hepburn's famous years there in the 1940s.  Or at any other top Hollywood studio for that matter.  The white mother escorts the black mother into the dining room for dinner.  The black characters and the white characters sit at the same tastefully set table for dinner. 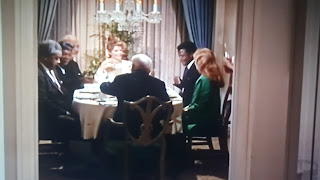 I wrote another post on GUESS WHO'S COMING TO DINNER earlier this month, if you'd like to read it.  Go back to October 11th.
at October 28, 2017