Television's legendary Queen of Comedy was aware of the problem when she was a contract player at RKO Studios in the 1930s.  The late, great Lucille Ball told a class of show biz hopefuls about it back in the 1970s. 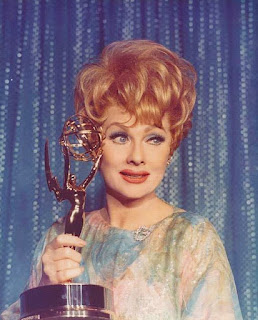 Brava to all those brave women who have come forth with accounts of sexual harassment that they'd kept secret for years.  The Harvey Weinstein scandal and the shockingly similar details of his alleged grossly inappropriate sexual behavior from those women has rocked Hollywood.  I'm glad these stories are coming forward.  This kind of toxic masculinity and vile sexual disrespect needs to end. 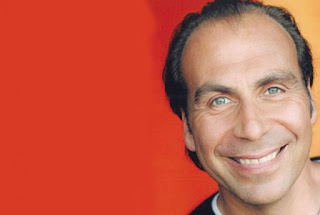 Comedian, actor and writer Taylor Negron was a very dear buddy of mine.  He was bright, gifted talent taken by cancer two years ago at age 57.  We'd both grown up in Southern California at a time when veteran movie and TV stars were still accessible, when they took time to share their knowledge if they sensed you truly were interested in hearing and learning from it.  I heard Taylor on NPR talk about his Tuesdays with Lucy.  He was one of the aspiring young actor in classes at Sherwood Oaks Experimental Film School on the corner of Hollywood Boulevard and Ivar Street. 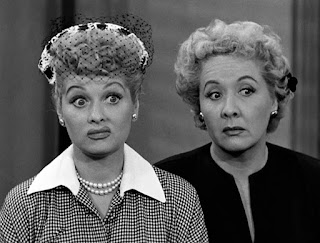 Lucille Ball was the star of the internationally famous I LOVE LUCY sitcom, a hit CBS show in the 1950s that brought her, at age 40, the kind of stardom that years of Hollywood movie work hadn't.  I LOVE LUCY made Lucille Ball a head of the extremely successful Desilu Productions.  She went to Taylor's classes and spoke.  According to Taylor's piece, which I'll transcribe in part, she was in tears during the open of her first appearance in the class.  Someone dear to her had died.  In May 1977, Lucille Ball told the class:

"The kindest, most lovely woman in the world died an hour ago.  Lela Rogers.  Ginger's mother."

Ginger Rogers, star of RKO classic musicals with Fred Astaire, was a special guest star on one of Lucille Ball's post-I LOVE LUCY spin-offs in 1971.  In 1937, Ginger and Lucy whipped out wisecracks as struggling New York City actresses who live in a women's theatrical boarding house.  The RKO movie, STAGE DOOR, was an Oscar nominee for Best Picture.  Ginger was a big star then on the RKO lot.  Lucy was a screen newcomer.  Here's a clip.
Lucy continued about Ginger Rogers' mother:  "In the early '30s when women came to Hollywood and they got off the train, they were met by men who impersonated agents and studio executives offering them rides.  The men raped these women,"  Lucille let the tears roll.

"Lela Rogers created the Hollywood Studio Club, a place where young actresses could live, and be safe from these rapist men.  In those days, when you were raped, a girl never mentioned it."

Ginger Rogers had a big comedy hit with a project that marked Billy Wilder's first time as film director.  The movie was THE MAJOR AND THE MINOR, a 1942 Paramount release. 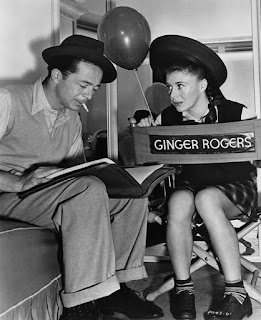 Ginger played Susan Applegate, a sweet young lady supporting herself with a job in Manhattan.  She's so fed up with having to outrun married, middle-aged men chasing her around the room that she's headed back to her hometown.  But something happens when she gets to the train station.  She doesn't have enough cash for one adult ticket. She disguises herself as a 12-year old so she can board with a reduced fare.  A responsible and respectable military officer becomes her guardian, believing that she is a kid, and -- you guessed it -- she falls for him but has to figure out how to grow instantly from 12 to 22 and steal him away from his selfish, unpatriotic fiancée. 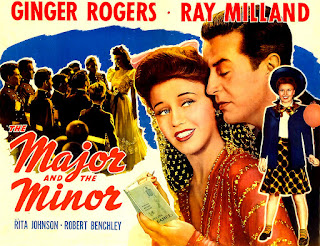 In one scene, Susan Applegate goes home to her mother in Iowa.  Lela Rogers, Ginger's real life mom, played Susan's mother in THE MAJOR AND THE MINOR.  She was very good. 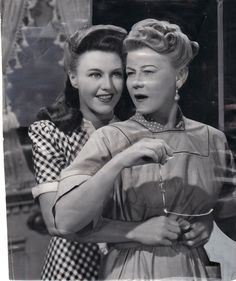 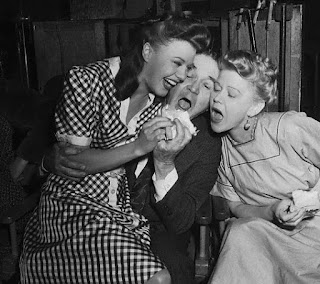 Not only did Ginger Rogers introduce and dance to new songs in now classic RKO musicals with Fred Astaire, she was a pro at screwball comedy roles.  She won the Best Actress Oscar for RKO's 1940 feminist drama, KITTY FOYLE.

Lela Rogers was an accomplished woman who was devoted to helping her daughter achieve a successful film career.  According to Lucille Ball, Ginger Rogers' mother helped a lot of other women, daughters of parents she never knew, by creating the Hollywood Studio Club.  I'm so glad Taylor Negron shared that story.