Singer Kay Starr, quite popular in the 1950s, died Thursday at her home in the posh Bel Air neighborhood of Los Angeles.  Her big hit record, the one that became her signature tune, was "Wheel of Fortune."  Kay Starr was 94.  She was so popular in the 1950s that she was a special guest star in a network TV special.  The production marked the musical debut of a cast member. The cast member was four-time Oscar nominee -- Claude Rains. 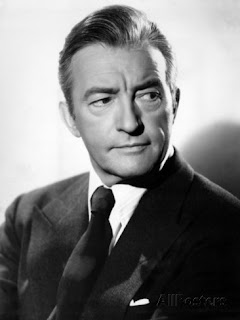 Yes, that Claude Rains.  The classy character actor who was seen in THE ADVENTURES OF ROBIN HOOD, MR. SMITH GOES TO WASHINGTON, THE INVISIBLE MAN, Hitchcock's NOTORIOUS, NOW VOYAGER and CASABLANCA. 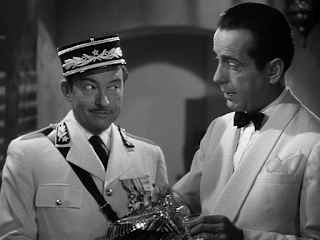 The show that featured Claude Rains in a musical spotlight was a network special for kids in 1957.  THE PIED PIPER OF HAMELIN starred Van Johnson doing double duty as a townsman in the medieval German village and as The Pied Piper.  This musical put Van Johnson in tights and gave him the kind of hat one would usually see on Claudette Colbert.

It may be a medieval German village, but Van Johnson still sounds like he did at MGM in BATTLEGROUND, BRIGADOON and IN THE GOOD OLD SUMMERTIME with Judy Garland.  Also, it's obvious that he does not do his own athletic ballet-based dancing when we first meet the charismatic Piper.  This fantasy story, a morality tale about the misuse of authority and power based on a famous poem, is performed in verse like the Robert Browning poem.  Modern lyrics were added to the classical music of Edvard Grieg.  Although Van Johnson is the star, Claude Rains steals the whole production as the mayor who needs to rid his village of rodents.  The mayor also wants to eliminate school and play.  He finds children a bother.  Especially at dinnertime.  There's Rains on the right in the photo below. 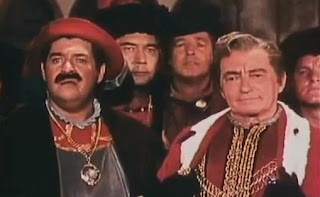 About fifteen minutes into the show, there's a jaunty number called "Prestige" performed by Claude Rains as the medieval mayor and two of his councilmen.  Rains talk-sings like Rex Harrison in MY FAIR LADY.  He keeps the beat, obviously has fun with the number, and does a little dance bit on the table.  This TV special was made when the actor's big movie days were behind him and he was doing mostly television work. 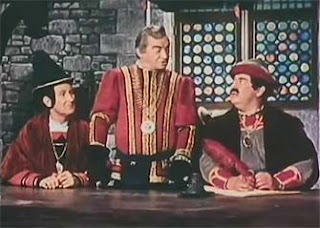 The above photo is from the "Prestige" number.  The performer to the left of Claude Rains is Doodles Weaver.  Weaver was a tall, comic entertainer.  He was popular at the time and worked on NBC.  Actress Sigourney is the late entertainer's niece.  His brother, Pat Weaver, was the top NBC executive who created the TODAY show in 1952. 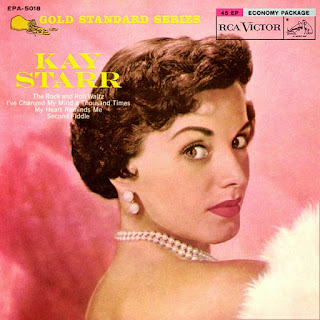 In the last half hour of the 90 minute telecast, Kay Starr has a brief acting role as a mother.  Her child, along with all the rest of the village's children, disappears after following the Pied Piper.  Kay has a number called "A Mother's Lament."

When I was a kid,  THE PIED PIPER OF HAMELIN was in syndication and aired frequently on an independent local station in L.A.  Mom would have my little sister and me watch it because it was good for kids and it was an introduction to some classical music.  THE WIZARD OF OZ this show is not.  At times, it has a better than average community theater look.  Keep in mind this is a production from the early days of TV.  But it sure is fun to see Claude Rains do a spirited song and dance.  What a fabulous surprise.  I found THE PIED PIPER OF HAMELIN online.

As for late Kay Starr -- what a solid singer she was.  My favorite recording of hers is one I play a lot every Christmas season.  I totally dig "The Man With the Bag"!  Here 'tis.