You know the movie.  This classic is a gender-bender remake starring two actors in top form.  HIS GIRL FRIDAY starred Cary Grant and Rosalind Russell slamming across comedy performances that are just as fresh today as they were in 1940 when the film was released.  Grant was a master at screen comedy.  He was nominated for two Oscars.  Both nominations were for dramatic work.  Rosalind Russell racked up four Oscar nominations in her career.  HIS GIRL FRIDAY provided Russell with one of her signature roles.  But it didn't bring her an Oscar nomination. 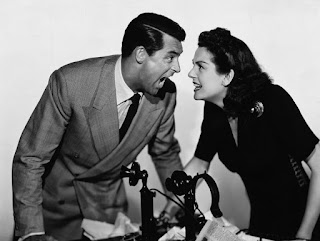 THE FRONT PAGE, an early 1930s film version of the play, had two male leads in the newspaper story.  The Howard Hawks remake changed them to a bickering divorced couple -- the manipulative newspaper editor and his ace reporter who is also his ex-wife.  She's engaged. She plans to leave the journalism life and just be a housewife.  But an innocent man is scheduled to be executed and she's the right reporter to help the editor break the true story wide open.  If he can convince her to cover the story and delay her wedding to a big sweet dud played by Ralph Bellamy.

What a blessing it is for us classic film lovers to be in an age of film preservation and restoration.  When I was a kid in Los Angeles, the country wasn't wired for cable then.  We didn't have hundreds of cable channels and 24 hour TV programming.  We didn't have VHS, DVDs and DVR then.  We had the three senior networks -- CBS, ABC and NBC -- plus their local network affiliates. We also had a few local independent stations.  There were some old movies that aired a lot on more than one channel because they were "public domain."  The copyrights had not been renewed for whatever reason.  During summer vacations from school, three movies the aired a lot on local stations during those months were IT'S A WONDERFUL LIFE, HIS GIRL FRIDAY and Billy Wilder's ACE IN THE HOLE.  However, back then, Wilder's movie had been renamed THE BIG CARNIVAL because it was such a flop at the box office. And with unenlightened critics.  The prints of these movies were always grainy, scratchy and often edited down a bit to make room for commercials.  In my late teens and early adult years, those three films were constantly booked on revival movie theater schedules and we young baby boomers loved them.  I'm so proud that my generation so enthusiastically appreciated IT'S A WONDERFUL LIFE and ACE IN THE HOLE that it led to those works of art getting the love they deserved.  No longer are they public domain movies on VHS in the bargain buckets of drugstores.  They've been rescued, remastered and restored to mint condition.  They have prestige.

Come January 10th of next year, HIS GIRL FRIDAY gets love from the outstanding Criterion Collection.  That's the date for the Criterion release of HIS GIRL FRIDAY.  This Howard Hawks gem was on TCM one morning this week.  I had never, ever seen such a pearly print of that film.  It was gorgeous. 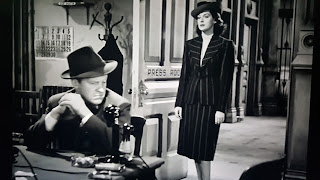 It's that's the quality we can expect from Criterion, that DVD package will make one fabulous belated Christmas gift. 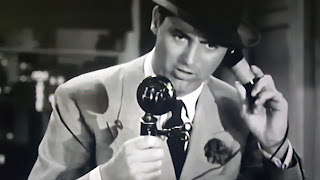 In her autobiography, LIFE IS A BANQUET, Rosalind Russell had nothing but love and praise for Cary Grant -- and added that she really had to keep on her toes with Grant because he was such a comedy master.  She even had a couple of "ad libs" written for her to keep up.  And, yes, Hawks intended the machine-gun pace of their dialogue delivery. 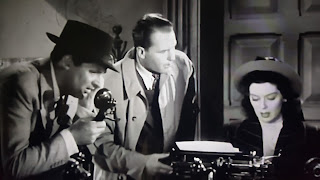 She also wrote that, considering the zippy pace of the story coupled with the corrupt city politics Hildy Johnson (Roz) and Walter Burns (Cary) are hurriedly out to expose in the newspaper, she was worried about her character not showing a soft, feminine moment.

Hawks told her that moment would be when Hildy, in a slower and softer voice, interviews the unjustly convicted prisoner in his cell.  She offers the hopeless convict her cigarette and apologizes for the lipstick.  Watch that moment and you'll see just what director Howard Hawks meant.  And you'll see what Rosalind Russell expertly delivered.

Cary Grant and Rosalind Russell never won competitive Oscars but both performers received special awards from the Academy in the 1970s.  In 1940, moviegoers saw Cary Grant in HIS GIRL FRIDAY, MY FAVORITE WIFE and THE PHILADELPHIA STORY.  For Rosalind Russell, her "career girl" role as ace reporter Hildy Johnson followed her comedy breakthrough performance in 1939's THE WOMEN.

So...for you HIS GIRL FRIDAY fans...look for the Criterion Collection release on Jan. 10th.
Criterion.com