THE SOUND OF MUSIC Notes

NBC has a live telecast of Rodgers & Hammerstein's The Sound of Music airing Thursday night, December 5th.  This is a big special for the network.  It will star country music star and American Idol winner Carrie Underwood as Maria and Stephen Moyer, star of HBO's True Blood, as Captain Von Trapp.  From what I've read, this telecast will be based on the original Broadway production that starred Mary Martin, one of the greatest stars of Broadway musicals, as Maria.  Mary Martin also originated the role of Nellie Forbush in the original production of Rodgers & Hammerstein's South Pacific. 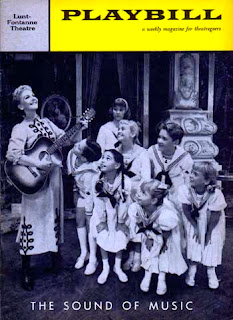 When we baby boomers were kids, we saw Mary Martin annually on NBC as Peter Pan.  That musical special would get a once-a-year network airing just like The Wizard of Oz did.  Mary Martin's son grew up to become a star on NBC.  TV audiences loved Larry Hagman as the astronaut on NBC's, I Dream of Jeannie.  Hagman went on to even more TV fame as J.R. on CBS' Dallas.  As for The Sound of Music, many people today probably don't realize that Julie Andrews starred in the film version of a Broadway hit.  Not only did the movie version open up the story beautifully, beginning with the breath-taking opening sequence, it was perfectly cast.  Andrews had won the 1964 Best Actress Oscar for Disney's big musical fantasy hit, Mary Poppins.  Her extraordinary voice, her acting talent, her charm, her youth and box office appeal made her a most excellent choice for Maria.  The lead role in 1965's The Sound of Music would bring Julie Andrews her second Best Actress Academy Award nomination.  It's probably her most beloved film role. 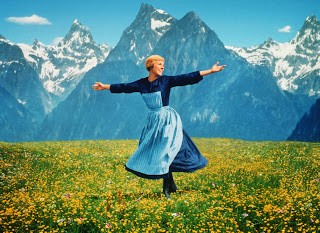 By shooting the film on location in Austria, the big screen gave us gourmet eye candy. 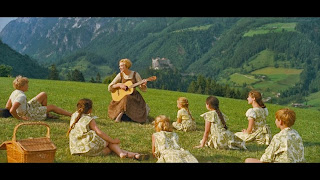 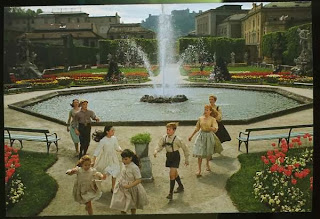 This movie was a box office blockbuster.  I was in Catholic school during its exclusive engagement in Hollywood and there were special group rates and showings for L. A. schools.  Especially Catholic schools. Our classes boarded a big yellow bus and hit the freeway.  You'd have thought that this movie was the equivalent of the first Easter morning after the Crucifixion.  I'd never seen the sisters so excited about an event.  Our teacher, Sister St. Mark, could not stop talking about it.  She played the soundtrack almost every Friday afternoon for music period.  We all had to learn "Do-Re-Mi" and sing it in class.  The Sound of Music starring Julie Andrews was like Woodstock for nuns. 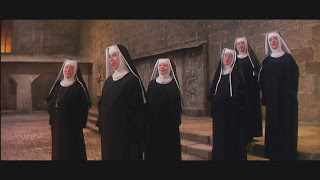 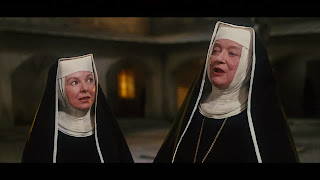 This 20th Century Fox film was practically required viewing for all us Catholics.  I'm positive that, after the Mother Superior sings "Climb Ev'ry Mountain" to Maria and hits that big note at the end, several nuns in the movie audience wanted to jump up and shout "Play ball!"  It was that rousing.

Not only was this classic Rodgers & Hammerstein score popular in our classrooms, it was popular in my South Central Los Angeles neighborhood.  Did you ever see the 1991 movie, Boyz n the Hood? That was the community of my youth.  That's where I grew up.  Several homes on our block had at least one Rodgers & Hammerstein soundtrack mixed in with the jazz and Motown albums.  Why?  Because the great Rodgers & Hammerstein shows musically shouted down racial bigotry, religious intolerance and social class barriers.  Look at South Pacific, The King and I, and Carousel.  Our minority families connected to their message.  The Sound of Music was no exception.  The movie, Oscar winner for Best Picture of 1965, came out at a time when we needed it most.  This was just two years after the 1963 assassination of President John F. Kennedy, a tragedy that shocked and gripped the country with an almost inexpressible grief.  This movie, this optimistic and colorful family fare, helped us heal from the deep emotional scars of 1963.  It did not go to television until several years after it won the Oscar.  It would go back into the 20th Century Fox vaults, get re-released in later years and make even more money. 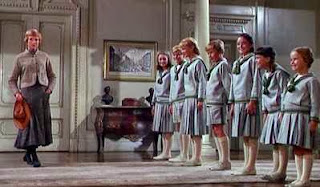 I'm curious to see what Carrie Underwood does with the dramatic aspects of Maria, the pain in her life.  The clues of that are in the music.  In a good musical, songs are not just songs.  They can be like monologues that reveal character.  The opening sequence with Julie Andrews singing the title song is now famous.  However, with her luminous voice and within that majestic panorama, we learn something important about Maria.  She sings,  "I go to the hills when my heart is lonely..." and "...my heart will be blessed with the sound of music..."  Where do we see her sing this?  In the hills!  Maria is a good-hearted but lonely young woman!  That is a major clue for the actor's internal approach to the character.  There's more to that number than just a lady walking past some trees. 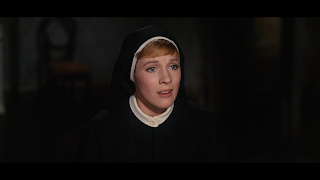 Is convent life her true calling?  Or will she use religion as her hideout?   Has life just beaten her spirit down so much that she will seek refuge within those walls to keep from being hurt again by the outside world?  Maria is not meant to be a nun.  She's meant to be a governess.  She's meant to help children find their true voices. She's meant to be loved by a handsome widower played by Christopher Plummer. 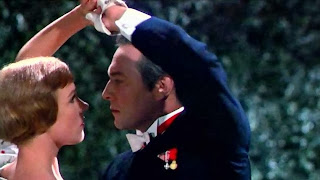 After President Kennedy was killed, families needed to see something that reassured us of the power good has over evil.  Yes, Maria is plucky.  She's spirited.  She's singing and dancing.  She will also risk her life to protect a child, whether she's the mother of that child or not.  She will give children the love, attention, respect and peace that she may not have received herself in her childhood.  That is key.  She and Captain Von Trapp face the world's ultimate evil of the 1930s -- Hitler and his Nazi regime.  They will have the courage to get their children to safety and they will not bow down to evil. 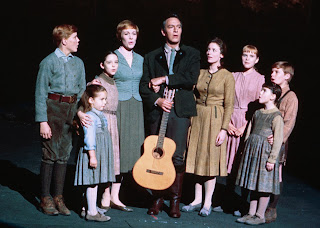 We needed to see Captain Von Trapp rip up that Nazi flag. 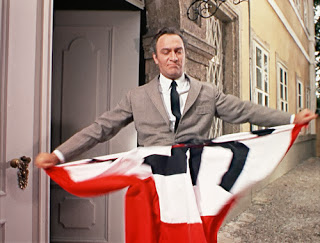 Not all the songs sung in the Broadway score were sung in the film.  One song, written by Richard Rodgers, was used in the film but was not in the original Broadway score.  Next to the title tune, it's my favorite number in the film -- "Something Good" sung in shadow by Captain Von Trapp and Maria.  They've just realized that they're in love with each other.

Maria tenderly sings, "Perhaps I had a wicked childhood, perhaps I had a miserable youth.  But somewhere in that wicked, miserable past..there must have been a moment of truth..."  That is another important revelation about Maria. 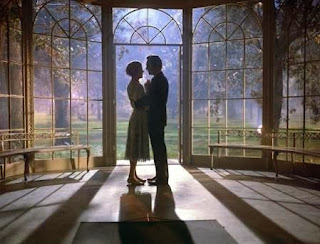 I don't know if that lovely song will be added to the original Broadway production-based NBC telecast but it does provide deeper insight into Maria.  Just because she's got an optimistic exterior doesn't mean that her whole life has been happy.  Julie Andrews got it.  Let's see if Carrie Underwood gets it.

Also, Carrie Underwood is a winner from the modern TV phenomenon of auditions before a panel of judges as the new weekly variety show.  American Idol, NBC's The Voice and America's Got Talent -- they all remind me of theater critic Addison DeWitt's line in the film classic All About Eve:  "That's all television is, my dear.  Nothing but auditions."

There is some great talent on those shows.  There's also some not-so-great talent.  And there's talent that could be great if it was original.  The song "At Last" was written for a 1940s 20th Century Fox musical called Orchestra Wives.  It was first heard in that movie.  Over a decade later, Etta James gave it a different and fabulous rhythm & blues interpretation.  Since then, just about every person who sings that standard as an audition number copies Etta James.  From early Christina Aguilera to contestants on those shows I mentioned, if you hear that she or he will sing "At Last," you can bet you'll hear a replica not only of the Etta James delivery, but also her arrangement.  The same slower tempo which, by the way, was a slower tempo than its debut in the 1942 film.  Rarely does anyone ever change "At Last" up with a Latin beat or a jazz arrangement.  It's always an imitation of the 1960 Etta James recording of that 1942 hit song.  On those audition shows, we've seen many young people who are gifted with big voices.  However, they often substitute vocal gymnastics for true interpretation and real individuality.  They ignore the tale of the song.  Go to YouTube and do this:  Listen to the Ray Charles recording of "Come Rain or Come Shine" with its rhythm and blues arrangement.  Next, listen to Sarah Vaughan's sublime 1950 light jazz vocal of it.  Then listen to Judy Garland's driving Carnegie Hall concert rendition of "Come Rain or Come Shine."  She's like a voodoo priestess casting an urgent love spell.  Each version is a winner, each one has a different arrangement, each one has an artist connecting to the story of the lyrics.

Actress/singer Rebecca Luker played Maria in a Broadway revival of The Sound of Music.  Here is a master class example of how to take a famous song closely associated with another artist and make it your own by finding your own original interpretation and inner life.  She's not copying Julie Andrews.  Rebecca Luker's performance is Heaven-sent, one of inspired acting and singing.  It shimmers.  You need to hear this.
I am not a famous critic.  Lord knows I'm not a celebrated actor.  As for musicals, I wish I could sing.  And so do those who've heard me.  These are my personal observations as someone who really loves the fine arts and appreciates actors.  If you see NBC's The Sound of Music with Carrie Underwood this week, leave me your comments on it.