Shirley MacLaine in THE APARTMENT

Shirley MacLaine is the only Hollywood star to receive Kennedy Center Honors in the festivities that air tonight on CBS.  Brava, Shirley!  I have written about her a number of times on my blog site here.  I'm a longtime Shirley MacLaine fan.  I dig the big movies that got her Oscar nominations for Best Actress.  I love the ones entertainment reporters don't usually mention but, to me, they're totally cool MacLaine movies.  Movies like My Geisha, What A Way To Go! and Gambit.  When I was a kid, I'd go to the movies on a Saturday afternoon if one starred Shirley MacLaine.  I didn't care what the movie was about.  I just wanted to see her.  One of my Top 5 favorite Shirley MacLaine movies is also one of my Top 5 favorite Christmastime movies.  It's a classic.  It's Billy Wilder's The Apartment -- Oscar winner for Best Picture of 1960 and one of the films that brought her a Best Actress Oscar nomination.

I like the reference made to this classic in early episodes of Mad Men on TV.  The ad guys felt it was ludicrous because, for one thing, a white person was playing an elevator operator.  That lets you know where America was socially at the time.  Billy Wilder could take something that could be sour and find something sweet in it.  He likes people.  That comes through in his work.  Compare his work to the films by the Coen Brothers.  At a time -- especially in Hollywood films -- when a young woman's virginity counted as her most valuable asset and the thing that made her respectable, he showed that a lack of virginity before marriage has nothing to do with the goodness of one's soul and the kindness in one's heart.  Those are more important.  We see that in elevator operator Fran Kubelik played by Shirley MacLaine.  Fran is lovable.  She likes C.C. Baxter, a company man who plans to get to the top.  He's played by Jack Lemmon. 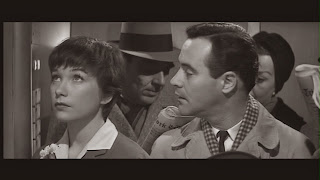 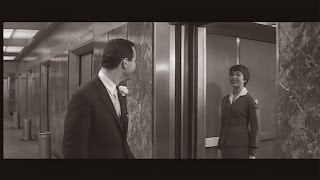 You know the movie.  C. C. Baxter loans his apartment out to company executives who have a little extra-marital playtime before going home to their wives.  This is Baxter's way of playing the corporate game to move up faster.  He and his executives all work for the big boss, Mr. Sheldrake.  The big boss, who has a wife and kid, is played by Fred MacMurray.

At the swingin' Christmas party in the New York City company offices, folks drink too much and talk too much.  There's some corporate backstabbing.  Baxter is tenderly attracted to Fran.  He's unaware that Fran has been involved with Mr. Sheldrake.  She wants to break it off but she keeps falling for his line of jive.  At the Christmas party, she discovers that she's not the first woman Mr. Sheldrake has strung along for a good time.

She overdoses in Baxter's apartment.  As he nurses her back to health, they both find a redemption in each other.  A love story begins.  But she still needs to break from Mr. Sheldrake.  He's a menagerie -- part corporate shark, part horndog, part snake.

My favorite Shirley MacLaine moment in The Apartment comes when she realizes how truly and deeply she's loved by C.C. "Bud" Baxter.  Mr. Sheldrake is on the prowl again and is taking Fran out on New Year's Eve with the main intention of starting the New Year off with a bang.  At a hotel in Atlantic City.

With him, Fran Kubelik would be the Queen of Nothing.  When she realizes that Bud loves her, you see and can feel a light turned on in her soul.  She becomes radiant.  And aware.  She abdicates her throne as Queen of Nothing in the life of Mr. Sheldrake.  I love that beautifully acted moment.  Fran's spirit is renewed over the holidays.

I've loved this film for quite a long time.  I grew more deeply in love with it over the years when I lived in New York City.  This is such a New York story, full of a certain wistfulness that millions of us single folks in Manhattan felt at holiday time.  We recognize ourselves and our emotions in this Billy Wilder classic.  I've been ambitious like Bud Baxter.  I've been romantically gullible like Fran Kubelik.  Only from Billy Wilder could we get a movie with cheating husbands, corporate backstabbing and a suicide attempt -- and it's a heartwarming holiday love story that take us from Christmas to very early New Year's Day.  With one of the greatest closing lines ever --- 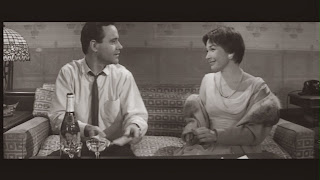