Fred Astaire is the Star of the Month for December on Turner Classic Movies.  TCM puts his legendary dance artistry in the spotlight every Wednesday night this month.  For me, that's a great Christmas gift before Christmas Day.  He was an incomparable artist of Broadway, screen, radio, records and television.  His work still takes my breath away. I was working at VH1 and was preparing to tape a show when a co-worker approached me and gently said, "I have some sad news."  She told me the news that Fred Astaire had died.  Co-workers knew I loved him and would always try to work an image of him into the set decoration.  Mom called and left me a sweet message on my answering service.  She could testify that my love of Fred Astaire went back to just about the time I was learning to read in elementary school.  Seriously.  As much I loved watching cartoons, I was even happier watching famous Fred Astaire and Ginger Rogers musicals of the 1930s on KHJ/Channel 9.  That was L.A.'s independent station then hooked up to the RKO movie library.  When I was a little boy, I would have gone blissfully to bed without my supper for the chance to see Top Hat on Channel 9.  If DVDs or even VHS tapes had existed back then, I would have rewound and replayed his iconic and dazzling title tune signature number in that classic so many times that my parents would've begged for mercy. 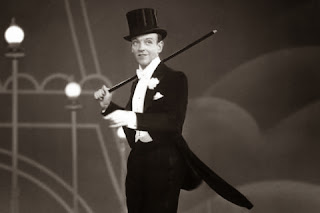 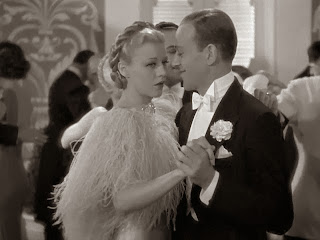 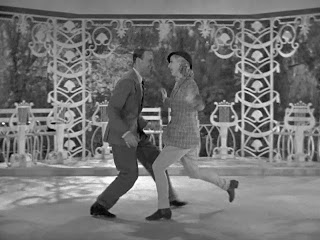 What a great, joyous and innovative art deco musical comedy Top Hat is.

The first time I saw Fred Astaire dance in a movie shown on TV, I felt like a huge Christmas tree had just been lit up in my heart.  I had that feeling every time I saw him again.  I accidentally broke Mom's living room chair trying to copy one of his routines. 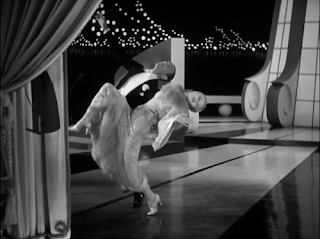 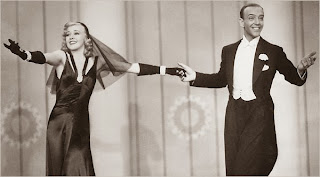 It's easy to find a lot of biographical information about Astaire.  There's a profile on the TCM website.  Let me tell you how much his work still means to me personally  -- how it soothed my spirit. 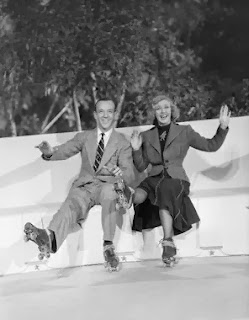 I'm an uncle.  I have a nephew who is 10 years old.  Often I watch him watching television.  He's a sweet kid who has more toys in his closet now that I think my sister and I had combined in our entire childhood.  He and his brother seem to have every toy, gadget, gizmo and new computer device there is.  He's got a nice, comfortable, uncomplicated life.  By the time I was exactly his age, 10 years old, I had been spat upon because of religious bigotry against Catholics, I'd been been ordered to strip naked and was then whipped with a belt by my father before he learned how to control his temper and I'd survived a near-death experience.  I was saved from drowning.

After humiliation, alienation, fear, after tears cried from having unjustly received great pain from someone bigger than I... every time my heart was broken, I turned to a Fred Astaire musical to make me smile again.  They never failed me.  Never.  They always soothed my spirit and healed by broken heart.  That's the impact his art had on me. 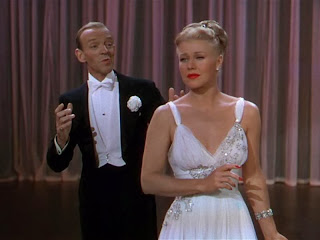 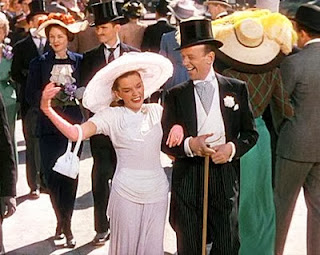 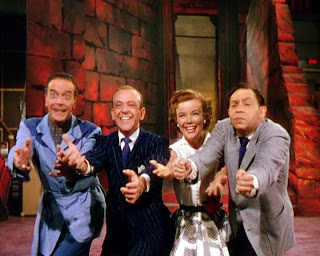 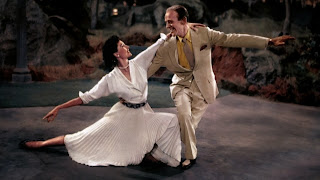 In the last three years, I was hit hard by this Great Recession.  I lost my job, I lost my home and I had to part with most of my belongings in it.  The day after Christmas of 2011, I almost lost my mother.  This week, Mom and I shared a big belly laugh over the phone.  She pulled through.  My sister saved her life.  I'm living with our brother as I persevere to start over.   During the bleak times of the last few years, what put a light back in my heart?  You guessed it -- Fred Astaire musicals. 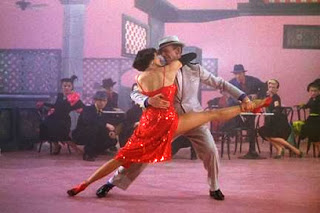 His career inspires me to this day.  Astaire challenged himself and did new things.  He's not called "athletic."  Gene Kelly is.  But look at Astaire in The Band Wagon, a sublime musical comedy.  The famous "Girl Hunt" jazz ballet with Cyd Charisse is one complicated, brilliant piece of choreography from the very athletic Michael Kidd.  He choreographed The Band Wagon and Seven Brides for Seven Brothers.  Astaire was in his early 50s doing those dances.  Look at the emotionally intense, chaotic dance he does in The Sky's the Limit after he introduces the song that became a Johnny Mercer classic, "One For My Baby (And One More For The Road)."  That is one athletic dance that he does in character.  He's a guy who's been drinking, he's angry at himself and angry at the war that's come between him and the girl he loves.  Astaire was in his early 40s then, older than Gene Kelly.  With Ginger Rogers in Shall We Dance (1937), he danced on roller skates well over a decade before Gene did.  He also danced on ice skates (in The Belle of New York).  That's one up on Gene.  His "Let's Kiss and Make Up" number for Audrey Hepburn in 1957's Funny Face defies age.  He was well into his mid 50s. His "He Loves and She Loves" dance with Audrey Hepburn, like his "Dancing in the Dark" number with Cyd Charisse in The Band Wagon and like his "Never Gonna Dance" number with Ginger Rogers in Swing Time, brings a tear to my eye with its beauty and emotion.  That's what art can do. Before Gene Kelly, he took the art of film dancing to a higher level.  He opened the door for Kelly.  Both realized that the dance expressed emotion -- just like a spoken monologue does.  The dance comes about when mere words are insufficient.  He treated the songs as monologues, as revelation of characters.  He didn't just dance.  He acted.  He reacted.  Astaire expressed the emotions of the scene and his character in his dances.

I've written before that musical comedies are basically a triathlon with a downbeat.  You have to sing, dance and act.  Fred Astaire and Ginger Rogers were like Olympic champions in that regard.  Especially Astaire.  It's so ironic that they were truly icons in the history of original Hollywood musicals with their legendary teaming, yet each got only one Oscar nomination -- and it was for a non-musical role.  Ginger won the Best Actress Oscar for excellent dramatic work as the working class feminist Kitty Foyle (1940).  Fred got a Best Supporting Actor Oscar for surviving The Towering Inferno (1974).  He did receive a special Oscar for his artistic contributions to film.  How I wish Hollywood had taken the hard work of musical comedies seriously and given Fred Astaire a Best Actor Oscar nomination for Top Hat, Swing Time or The Band Wagon.  Making hard work look easy and effortless was part of Astaire's genius as a musical comedy actor.

Fred Astaire also worked when his heart was breaking.  Early in my TV career, I interviewed Leslie Caron.  She and Astaire starred in Daddy Long Legs.  It's a musical remake, way better than the previous 1930s version, and Astaire's beloved wife loved the script.  She made him promise to make the film.  Phyllis Astaire, whom he married in the early 1930s, was hospitalized with cancer while he was making the 1955 release.  Leslie Caron told me that, during rehearsals, he was the ultimate professional and a true gentleman.  He would occasionally excuse himself very politely during a dance rehearsal, Caron told me, then he would go to a corner of the hall and weep.  He'd pull himself back together and continue with the rehearsals.  He was making that light-hearted musical for his wife.  When he couldn't be at her side in the hospital, his best friends David Niven and his longtime choreographer Hermes Pan would be there.  Phyllis Astaire passed away during production of Daddy Long Legs. 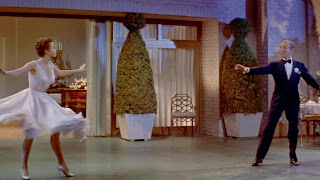 As I got older, that story became an inspiration to me -- especially when I lost my partner to a terminal illness in the 1990s while I had a live television job that required me to go on the air and be amusing.

I'm so glad I was a kid when Fred Astaire was still alive and doing some of his most critically-acclaimed work.  He did Emmy-winning NBC music specials in the 1960s with Barrie Chase, his last and one of his absolute best dance partners.  He embraced new music.  He honored black music.  After dancing, he did lots of straight TV acting.  He co-starred on ABC's It Takes a Thief series with Robert Wagner and was a network TV host.  He did guest appearances and commercials.  We hear Fred Astaire every holiday season as the voice of the narrator in the 1970 animated TV special, Santa Claus Is Comin' to Town. He stayed classy.  He stayed active.  He didn't need to stand on a red carpet and tell us who designed his clothing.  He appreciated his privacy and his family life.

The actor/singer/dancer/choregrapher is still my all-time favorite entertainer. 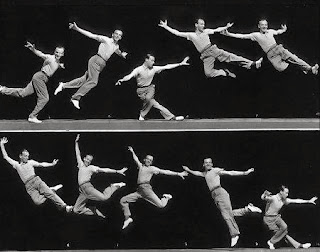 To this day, he continues to heal my heart when it's broken.  He continues to inspire my career.  Through the years, there were so many times when I felt that I'd never be able to smile again.  Watching Fred Astaire proved that those feelings were wrong.  While I keep the faith and continue seeking work, I take the musical advice that Fred & Ginger danced to in my favorite of their RKO musicals.  The song is "Pick Yourself Up" from Swing Time.

Thank you, Mr. Astaire.  I couldn't have made it without you.