Peter O'Toole Made Me Laugh

If you read some of the blurbs in social media when the sad news broke that acclaimed veteran actor Peter O'Toole had died, you'd think that his only two films were David Lean's epic, Lawrence of Arabia, the Oscar-winning classic that made the new screen actor an international star, and My Favorite Year, the marvelously funny 1980s comedy that brought the middle-aged O'Toole another of his 8 Oscar nominations for Best Actor.  The first one came for Lawrence of Arabia, Oscar winner for Best Picture of 1962.

In the 1970s, when I was a student at Marquette University in Milwaukee, I was a frequent patron at the campus movie theater.  It was called The Varsity.  I saw four comedies there that made me howl with laughter.  They had the same effect on the rest of the audience too.  They were comedies for a new generation.  Two were written and directed by Mel Brooks -- The Twelve Chairs and Blazing Saddles.  One was Hal Ashby's Harold and Maude starring Ruth Gordon and Bud Cort.  And there was the wickedly mad satire from Great Britain, The Ruling Class, starring Peter O'Toole.  The satire would bring O'Toole, as the 14th Earl of Gurney, another Best Actor Oscar nomination.

A film blogger on Twitter, in his appreciation for the late actor, wrote "My Favorite Year proved how adept he was at comedy."  To me, The Ruling Class proved how adept he was at comedy.  My Favorite Year confirmed it.  In this 1972 release, the story takes us to modern day Britain and its aristocracy.  A member of the House of Lords dies accidentally one night while getting his jollies during some costumed fetish behavior.  His huge estate is left to his son.  Nothing wrong with that.  However, his son is a paranoid schizophrenic who thinks he's Jesus Christ.  The son is played by Peter O'Toole. 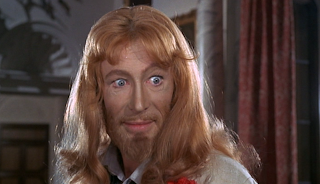 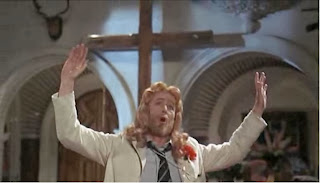 This is a Jesus who likes to break out into a song and dance and occasionally ride a tricycle indoors.  As he says, "Dignity has nothing to do with divinity."  As if that's not enough, he treats the servants as equals.  Especially Mr. Tucker, the butler who found his late father....hanging around, if you will.  Something must be done.  The relatives must either get the estate from young Jack, the 14th Earl of Gurney, or cure him of his kind and Christ-like behavior.  The sweet Lady Claire has a polite chat with him.  She says, "How do you know you're God?" 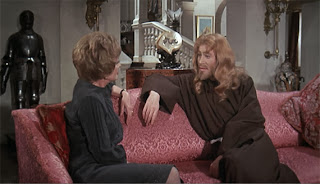 He replies, "It's simple.  When I pray to Him, I find I'm talking to myself."

His casual Christian attitude obviously has broken with the family tradition. His parting words to others as he leaves the room are "Enjoy yourselves while I'm gone.  Relax.  Have sex."  Yes, this is a different Savior.  He's a Savior who can appreciate a shapely blonde.  One is recruited to help another relative get control of the estate.

Peter O'Toole goes from daffy to desperate to demonic in this film.  He's hysterically funny as the harmless madman, especially when he's Jesus breaking out into a song and dance routine.  He's an animated, bright-eyed and chatty Jesus.  Yet, O'Toole also gives you glimpses into the desperate part -- you see that this is a man grappling with a serious mental condition.  Then comes the cure which makes him fall in line with the other aristocrats like his late father.  Which personality is more socially acceptable?  Which personality helps his family and his fellow man?  Which is embraced by the aristocracy? 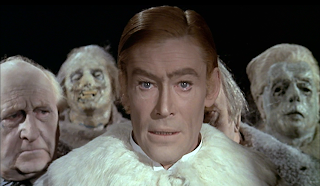 There are familiar faces in this twisted comedy.  Lady Claire is richly played by Coral Browne.  The actress is best-remembered as best friend Vera Charles opposite Rosalind Russell as Auntie Mame in the hit 1958 movie version of that hit Broadway comedy.  Alastair Sim, whom many feel was the best Ebenezer Scrooge with his performance in the 1951 version of A Christmas Carol, co-stars as a concerned clergyman.  Stern-faced and rock-jawed Harry Andrews, memorable as the abusive sergeant major in Sidney Lumet's military prison drama, The Hill, plays the whacked-out 13th Earl of Gurney.

The Ruling Class is available on the Criterion Collection DVD label.  This really is a must-see for Peter O'Toole fans.  When the cure for the schizophrenic Earl comes, so comes a change in tone in the movie.  One personality preaches love.  The other preaches fear.  It's not a beginning-to-end loopy, broad comedy like 1982's My Favorite Year.  But, trust me on this -- before Peter O'Toole's comic brilliance in My Favorite Year, there was his outrageous comedy performance in 1972's often overlooked The Ruling Class. 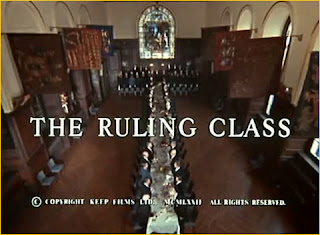 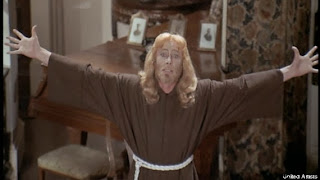 Watch it and keep in mind that's the same actor who played Lawrence of Arabia, Lord Jim and The Lion in Winter.  Such big screen versatility, wit and charisma will be missed.
at December 18, 2013