Turkey with THE LATE GEORGE APLEY

"Because we do not face virginity in the drawing room after a Thanksgiving dinner."  ~Ronald Colman in The Late George Apley. 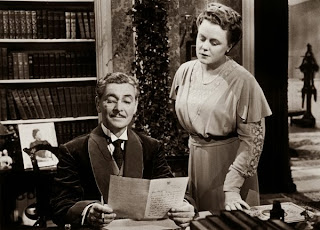 He's not dead but he's not exactly the life of the party either.  The Late George Apley is a 1947 satire, set in 1912 upper class Boston, that begins on Thanksgiving Day.  There's a stuffed turkey about to be eaten by some stuffed shirts, as rich folks used to be called.  Assorted relatives gather.  George is excited because he spotted a yellow-bellied sapsucker outdoors that late in November.  Prim, proper and rather sturdy-looking Aunt Amelia enters with the holiday greeting, "How are your teeth, Margaret?"  Aunt Amelia has a face that would've worked quite effectively on a "Do Not Enter" sign. 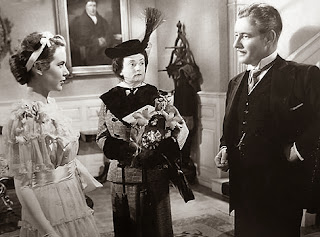 She seems obsessed with dental care, exposed bosoms and cuckoo clocks.  Another Apley relative remarks, "We've sat in these same seats for 18 Thanksgivings."  That's the way George Apley feels it should be.  Always the same.  Dear Mrs. Apley wonders if things really must always be like that -- always the same.

Young Eleanor has other ideas.  Fresh ideas.  Lively ideas.  Eleanor's also a major babe with a modern brain.  She's like a touch of spring in the winter.  She's in love with a working class guy who could not afford to attend Harvard like her father did.  She'd like to break out of the Apley Boston groove on snobby Beacon Street.  George, her father, says "Boston's not just a city, it's a state of mind."  Ellie longs for a new state.

On Thanksgiving, when supportive Ellie asks sweet and plain Agnes about her "coming out" into society party plans, she learns that Agnes is afraid.  Ellie tells Agnes not to be afraid because that high society ritual is an archaic, dull custom.  Ellie declares to Agnes, "We suffer from ancestor worship.  Thanksgiving is a typical tribal feast.  And 'coming out' is nothing but an old idea of introducing the virgin to the rest of the tribe."

Ellie likes to face things that exist.  She reads Freud.  Her mother, Mrs. Apley, gets curious about Freud.  Father tells vivacious Ellie to pipe down with the virgin talk on Thanksgiving.  And he tells her why.

Ronald Colman hits all the right notes in this breezy satire about "environment, points of views, one's approach to life."  George means well, he's a loving father and a good husband.  He's charming.  He just needs to loosen up, to embrace change so he doesn't break hearts the way his was once broken.  He disrupts Ellie's romantic relationship in a way that could turn her into another Aunt Amelia.  Joseph L. Mankiewicz directed this 20th Century Fox production.  Colman's other release that year was George Cukor's excellent theatrical suspense drama, A Double Life.  With a screenplay co-written by Ruth Gordon (Rosemary's Baby, Harold and Maude), Colman played an aging actor whose mental breakdown as he plays Othello leads him to accidentally commit a murder.  The script gives us a clever thriller with a look at what could happen when the actor becomes the character and gives the performance of his life.  Colman deservedly won the Best Actor Oscar for A Double Life.  The shy and dowdy Agnes is played by Vanessa Brown, the actress who played Mariah the maid William Wyler's The Heiress.  On Broadway, Brown originated the role of The Girl played famously by Marilyn Monroe on 20th Century Fox's film version of The Seven Year Itch.  Vanessa Brown is quite good as Agnes, the virgin wallflower who eventually learns to fight for her right to bloom. 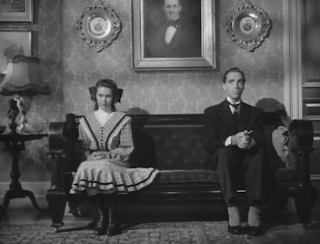 The Late George Apley is not a top shelf Joseph L. Mankiewicz classic like his A Letter To Three Wives and All About Eve but it's a very enjoyable movie to see on Thanksgiving.  It's 90 minutes of warmth and amusement, well-played at a smooth pace.  I think I'll be adding it to my two Thanksgiving must-see movies -- Woody Allen's Hannah and Her Sisters and Wes Anderson's Fantastic Mr. Fox.

I absolutely, totally loved Mildred Natwick as conservative Cousin Amelia in The Late George Apley.  You thoroughly understand why her husband needs a good stiff drink every once in a while.  Natwick is a hoot in that role and steals every scene she's in, whether she has dialogue or not.  Just look at her facial reaction to "We've sat in these same seats for 18 Thanksgivings."  Also, Peggy Cummins is yummy and radiant as Eleanor, the outspoken yet loving daughter.  Cummins is quite popular with classic film fans today as the lovely and lethal blonde in the 1950 film noir indie classic, Gun Crazy. 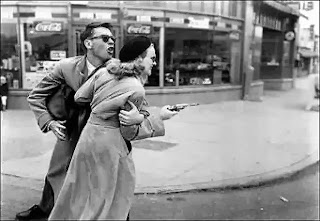 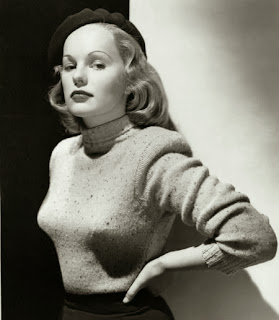 The Late George Apley shows off her sophisticated comedy talents. 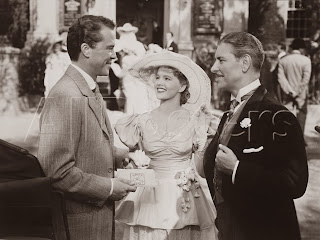 At the heart of this light comedy is the message for George Apley to get to know his children, to help them be happy and to let them lead their own lives.  That's a pretty nice message for today's parents too.  Happy Thanksgiving.