Last Sunday morning, I was listening to a radio show on KALW out of San Francisco.  The conversation was good and the topic was screenwriting.  The focus was on the book, The Philosophy of Charlie Kaufman. 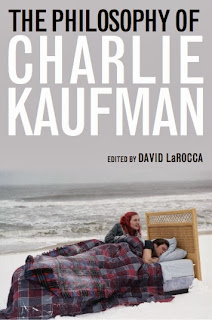 The host and the guest discussed the spiritual texture and social significance of Kaufman's screenplays.  They also discussed why audiences have connected to his work.  And they called his screenplays some of the most innovative of modern American cinema.  Charlie Kaufman wrote Eternal Sunshine of the Spotless Mind, the Oscar-winning Adaptation and the screamingly funny Being John Malkovich.

He's got a book out about his screenplays and he's called innovate. More power to him.  I thought about that in contrast to a writer from Old Hollywood, the Hollywood of the studio days and power.  Those were the days when writers got more work and more chances to work, it seems.  They also were blessed in being able to be original and not have to write screenplays based on computer games or comic book heroes.  They could also write screenplays that seemed inspired by comic books.  They could exercise more writing muscles in a profession that, I'm sure, has never been easy.


I saw a movie recently and found myself saying "He wrote that too?!?"  The writer is Ben Hecht.  What ever vitamins he was taking, I wish I could get some.  Charlie Kaufman would probably say the same thing.  I mentioned the three Kaufman screenplays discussed on the radio show.  Hecht wrote the screenplays to 1939's Wuthering Heights directed by William Wyler, starring Laurence Olivier and Merle Oberon. 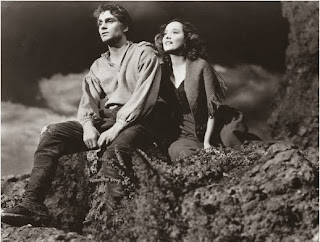 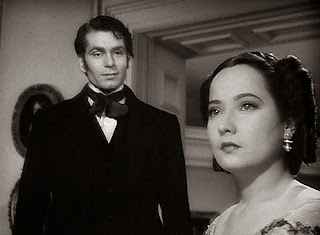 Hecht wrote the screenplays to two Hollywood classics with bold feminist images of women in extremely entertaining movies.  There was Rosalind Russell as the ace newspaper reporter in His Girl Friday.  She's the only gal in the boys' club of journalists and she's the best man for the job. 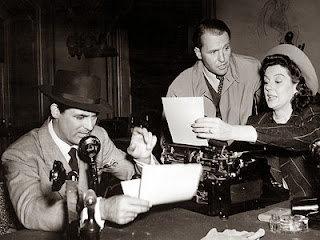 Russell was terrific in one of the best roles of her film career.  The same goes for Cary Grant as her boss and ex-husband.  This is one fast and funny screwball comedy. 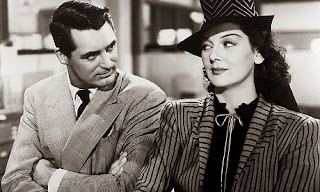 Hecht gave Cary Grant another of the best roles of his long film career in Alfred Hitchcock's Notorious. 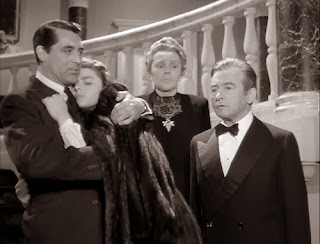 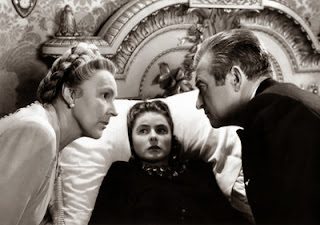 That same goes for Ingrid Bergman as the notorious party girl, Alicia, recruited by the U.S. government to help smoke out a nest of villains in Rio.  She basically goes to bed with a Nazi to help Uncle Sam in this espionage thriller. 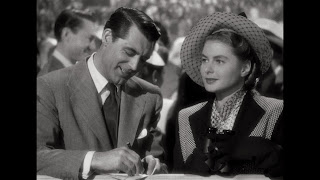 This Ben Hecht screenplay has great, innovate and subtle social comments on how America ties a woman's worth and social respectability to her virginity and "lady-like" behavior.  In this story, she is doing the most active and dangerous work in the mission she accepted.  She used her charms to marry into the Nazi household and acquire secret information.  The big bosses, all males, making snide remakes about her character because she has a history and men and cocktails in her past are all in a nice, safe office giving orders.  Her life is in jeopardy.

Alicia's the one who has to memorize names, get information and bang a middle-aged Nazi  who has a she-wolf mother.  This is a thriller, a love story (Cary Grant's the hero who falls for her) and a bold statement on how women are treated like second class citizens while being asked to be first class patriots. 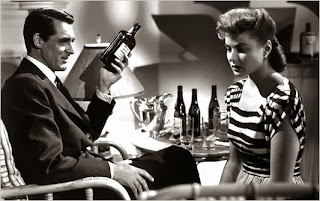 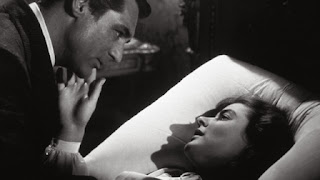 Cary Grant as the cold, insulting U.S. agent who admits he loves Alicia and calls himself "a fat-headed guy, full of pain.."  I love that line.

There you have it -- three strong screenplay from Charlie Kaufman, three strong screenplays from Ben Hecht.  But, wait!  There's more!  Hecht also wrote the following screenplays:  The Front Page (1931 and later remade as the gender bender comedy, His Girl Friday), Scarface (1931 and later remade with Al Pacino in the lead role), Design for Living (1933), Nothing Sacred (1937, one of the best Carole Lombard screwball comedies), Gunga Din (1939) and Hitchcock's Spellbound (1945).  He did not get screen credit but made contributions to the scripts of Gone With The Wind, Stagecoach, The Shop Around the Corner, Gilda, Hitchcock's Foreign Correspondent, Rope, Strangers on a Train and Lifeboat, Kiss of Death starring Victor Mature and Richard Widmark and the 1962 Mutiny on the Bounty remake starring Marlon Brando.  Those are just some of his credits.

Not all his scripts were hits.  He wrote the Bob Hope and Katharine Hepburn comedy, The Iron Petticoat.  She's a Russian Soviet pilot (with her The Philadelphia Story accent) and kicks Communism and military attire to the curb-ski when she falls for an American soldier played by Hope.  If this movie was any more of a dog, it would bark.

Hecht's The Specter of the Rose could become a camp classic like Valley of the Dolls and Mommie Dearest if it was available on DVD.  The dialogue is brilliantly bad and the movie has a cheesy but cool vibe to it.  An extraordinary male ballet dancer is on his toes but off his rocker.  He killed his first wife.  He may kill again.  He's fascinated with a woman but, in one scene, they can't touch.  He says to her, "Hug me with your eyes."  She answers, "I am."  He says, "Harder."  I did the DTST (Danny Thomas Spit Take) with my beverage as I howled laughing at that one.  Lionel Stander, the character actor with the gravelly voice, has the role of the cynical onlooker in this ballet thriller.  When describing the reputation of one ballerina, he said "She did a pirouette into an ashcan."  Good dancing.  Good actors.  Bad dialogue.  Big fun.  That's The Specter of the Rose. 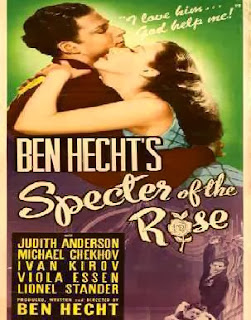 What was the movie that made me say, "He wrote that too"?  It also had feminist images and it looked like it could've been inspired by comic books.  Now available on DVD, a movie I had not seen in years since it delighted me on local TV several times when I was a youngster, Hungarian Zsa Zsa Gabor stars as the Queen of Outer Space. 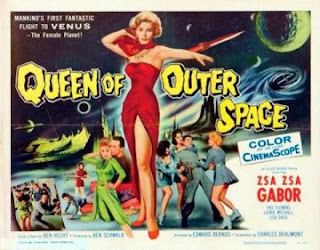 In this 1958 science-fiction fantasy, Ben Hecht let us join a crew of middle-aged male astronauts as they land on the planet Venus.  It's a planet populated solely with shapely women dressed like cocktail waitresses.  Not only that, it's got squabbling factions of women because two rival space-dames are competing to rule the planet. 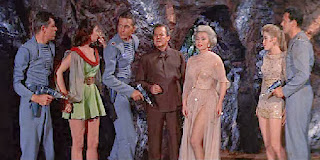 The rivalry between the two leaders is so fierce that it forces angry Zsa Zsa Gabor to say my favorite line in the whole movie:  "I hate her!  I hate that qveen!"

Ben Hecht ...wow.  What an amazing body of work.