When I was new in my professional TV career and working for an ABC affiliate in the Midwest, I interviewed actor/producer Michael Douglas a few times.  He was in New York City promoting new movies in which he starred.  We met when we was plugging Romancing the Stone.  Michael Douglas was a true gent.  He was classy, smart, gracious, playful, open, appreciative of good questions and he always made it a point to remember your name. He personalized his answers.  Years later, when his Hollywood legend dad, Kirk Douglas, was my premiere guest on my old VH1 talk show, I realized that Michael's charm was a case of "like father, like son."  In my career, they were two of my favorite people to interview.  I was thrilled when Michael Douglas won the Emmy last weekend for his vivid, surprising performance as Liberace in HBO film, Behind the Candelabra.  Douglas won the award for Best Lead Actor in a Mini-series or Movie. 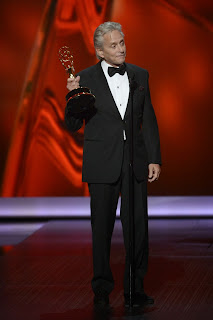 Matt Damon starred opposite him as Liberace's much younger lover who became part of the show biz icon's successful and flamboyant stage act. 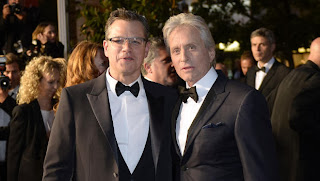 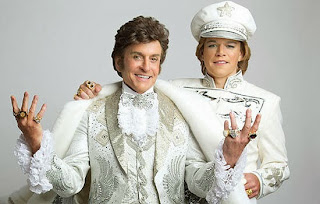 For my generation, Michael Douglas is one of those rare actors who went from starring on a hit TV series to starring in movies that became hits at the box office, one of which brought him an Oscar.  That's not always easy to do.  Just ask Shelley Long, Tom Selleck and Erik Estrada.  For years, he was called "Buddy Boy" as the young cop partner to Karl Malden's character on ABC's The Streets of San Francisco.  That series premiered in 1972.  There was great chemistry between veteran Malden and new actor Douglas. 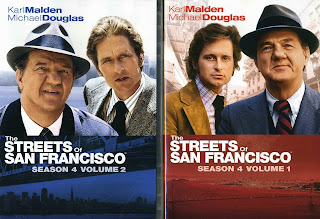 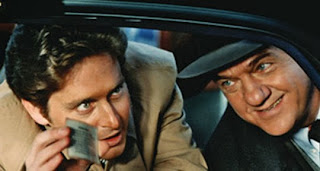 Michael Douglas left the series to produce a movie starring Jack Nicholson -- One Flew Over the Cuckoo's Nest.  Douglas would win an Oscar for producing the Best Picture of 1975.  Its stars, Jack Nicholson and Louise Fletcher, would take home Oscars for Best Actor and Best Actress.  Douglas co-starred in 1979's The China Syndrome, a drama about a nuclear plant mishap.  He also produced it and the picture was a big hit at the box office.  The other two stars, Jane Fonda and Jack Lemmon, got Oscar nominations for Best Actress and Best Actor.  Douglas starred in future big box office moneymakers --  Romancing the Stone, Jewel of the Nile, Fatal Attraction and Wall Street.  For that last one, he took home another Oscar -- for Best Actor of 1987. 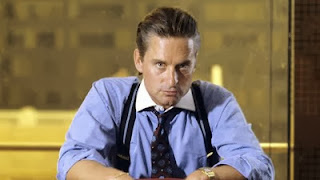 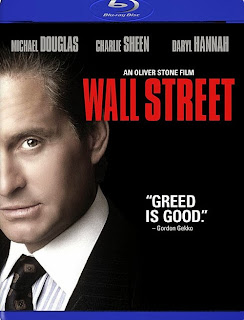 Wall Street brought Michael Douglas his only Oscar nomination for acting.  When his father was on my VH1, I mentioned how much I loved Michael's layered, subtle performance in Fatal Attraction.  Dad agreed and felt it topped Michael's Gordon Gekko in Wall Street.  Through the years, I've grown fond of the Michael Douglas performances in his not-so-big movies.  Those smaller films in which he's more naked, if you will, acting-wise are quite tasty.  I've got three to recommend to you.  The first one is Wonder Boys.  Michael Douglas really acts his age in this film and that's wonderful to see.  He doesn't have to be the slicked up "hot" leading man like he was in Romancing the Stone or Fatal Attraction.  In Wonder Boys, he's a college professor who teaches creative writing.  He's got a novel due but his writer's block has kept it from completion, which works the last good nerve of his book editor.  Robert Downey, Jr. and Tobey Maguire co-star. 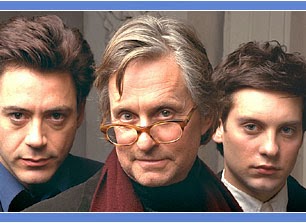 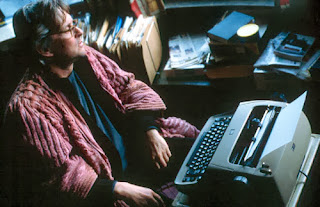 Also, his third wife has left him, there's a pregnancy and some business about a jacket once worn by Marilyn Monroe.  Michael Douglas is in peak form in Wonder Boys and he's matched by Frances McDormand.  She gives a delicious performance in the kind of seasoned, middle-aged woman role I wish we had more of in Hollywood films. 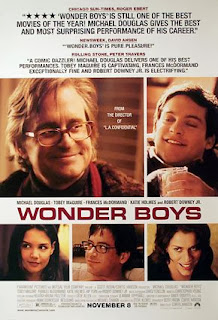 He sports facial hair in the next smaller film of his that I really dig.  This indie feature is King of California and co-stars the versatile Evan Rachel Wood.  It's a kooky, sweet film with those two playing father and daughter.  There's a reason for his Conquistador look. 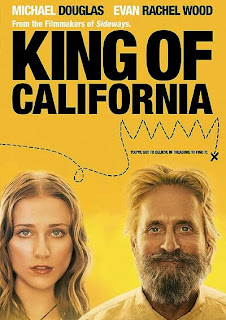 Just out of a mental institution stay, the harmless mad dad is in the care of his kind but emotionally drained daughter.  But he tells her that good times on the way.  Their dreams can come true.  He knows of an ancient Spanish treasure, lots of gold, buried there in suburban California.  According to his information, it's buried in the ground underneath their nearby Costco store.  That news is just the cherry on the cake of her day. 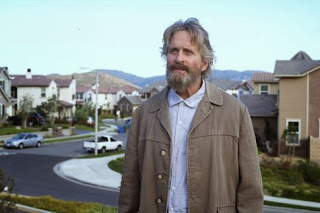 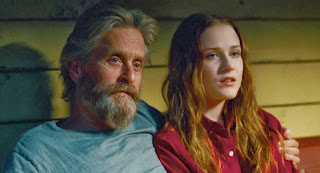 Here's why I loved this little movie: I totally understood how she felt.  I have been in her situation.  I'm the oldest of three siblings.  Our parents divorced right before I started high school.  After Dad moved out, Mom would occasionally get irresponsible with money.  Although college educated and a good mother, a couple of times she did act as if she'd graduated from the "Lucy Ricardo School of Household Finance."  She wasn't getting either alimony or child support.  As I grew up, I took some jobs that I really didn't want so I could help my single working mother pay her bills.  I was the child acting like a middle-aged responsible parent and the parent was financially acting like a teen-ager.  We both had dreams we wished would come true.  We both had disappointments.  Yes, I understood the daughter's emotional combo platter of love, responsibility, exasperation, neediness and occasional public humiliation.  She loves her father but, let's face it, he's a heavy piece of furniture.  Her needs have become secondary to taking care of him. 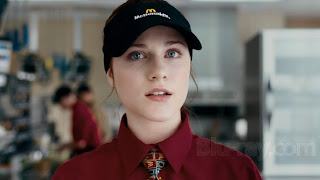 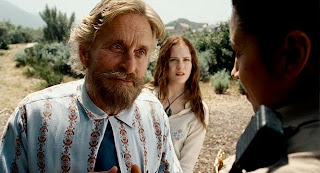 Dad hatches a plan to get the gold underneath Costco and coaxes her to help him. 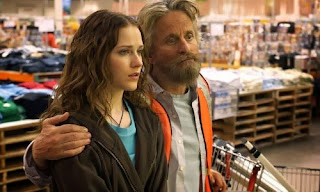 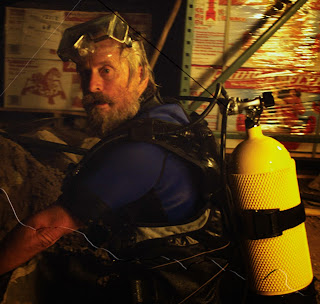 This movie is a fine reminder that Michael Douglas is no slouch when it comes to comedy.  If you've ever been in the situation of feeling that you had to put your youth on hold in order to take care of an older, unpredictable relative, make this a weekend DVD rental.

Will the crazy jazz musician father notice that his devoted young daughter has needs and dreams of her own?  Sometimes the people closest to us for a long time see the least.  Rent King of California (2007) and find out. 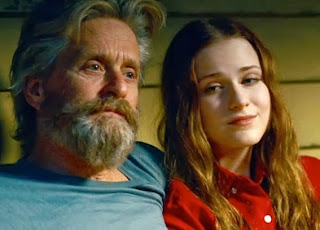 The third Michael Douglas movie to check out takes us from a kooky dude in California to a sophisticated gent in New York City.  He's a Solitary Man. 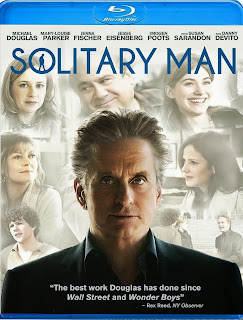 I agree with Rex Reed's review on the DVD cover.  Solitary Man serves up some of Michael Douglas' best movie acting since Wall Street and Wonder Boys.  I hoped this little film would get him in the Oscar race for Best Actor of 2009.  He was that good in it.

Ben Kalmen, Douglas' character, is a sophisticated New Yorker.  But that doesn't mean he's acting with some common sense.  He refuses to act his age.  He's not paying attention to his health.  Financially, he's facing eviction.  He strikes up a friendship with a college student.  And he's still a sex-hound, chasing babes young enough to be his daughter.  In fact, he's got a grown daughter who loans him money.

He has got to start acting his age if he wants to fix his life.  He should listen to his wise ex-wife, played by Susan Sarandon. 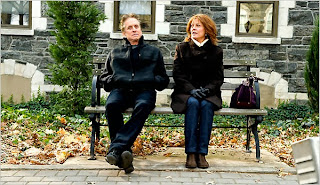 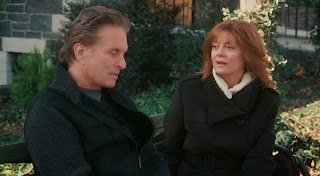 He should listen to his helpful best friend played by Danny DeVito. 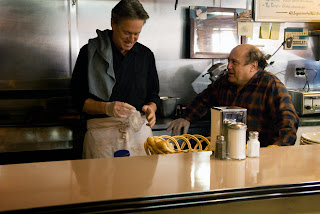 He should move on from hanging out with a college kid, played by Jesse Eisenberg. 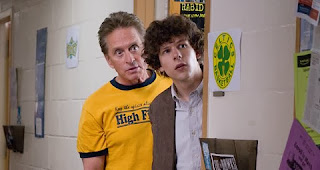 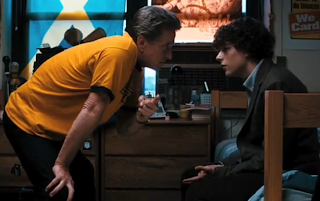 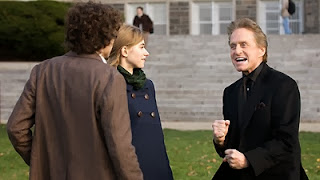 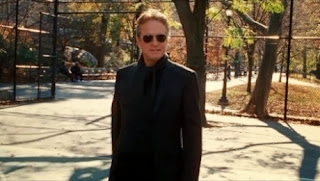 I hope you like Wonder Boys, King of California and Solitary Man.

I watched Behind the Candelabra on HBO while staying with married friends for a couple of days in New York City.  I was in town for an audition.  He, she and I were amazed at how good Douglas was as the famed pianist.  We felt that, had it been a theatrical release,  Behind the Candelabra would've gotten Michael Douglas definite Oscar buzz for his work as Liberace.  Good performances from the entire cast, smart direction by Steven Soderbergh and a good script.  But Soderbergh said in a radio interview that Hollywood didn't think it would be popular with mainstream heterosexual moviegoers, so it played on cable's HBO.  It played on HBO to rave reviews and 15 Emmy nominations.  It's a theatrical release overseas -- in Great Britain, Australia, France and Germany.

Although not a theatrical Hollywood release here in the States, Douglas' Behind the Candelabra performance is on a top shelf with his film work in Fatal Attraction, Wall Street, Wonder Boys, King of California and Solitary Man.

Hollywood feels safer releasing a movie like Last Vegas, a Michael Douglas comedy due out this fall.  Four senior buddies reunite for a fabulous fling.  The occasion?  A bachelor party for the Michael Douglas character.  They've been friends since they were kids.  Now they're in their golden years.  What kind of mischief could they possibly get into in Vegas?  At their age?  Morgan Freeman, Robert De Niro and Kevin Kline co-star. 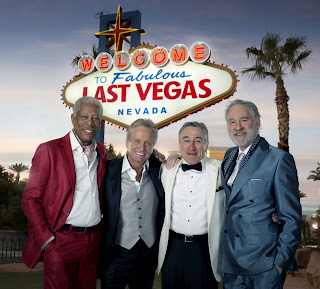 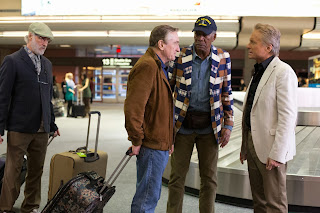