...how about you?  George Gershwin was born on this day in history.  He died young, taken from us in his 30s by a brain tumor.  But just look at the magnificent body of work he left for the world to enjoy since his untimely passing in 1937.  This year, a symphony orchestra performance of Gershwin's "Rhapsody in Blue" was the intro music for our first glimpse and the first scene of Leonardo DiCaprio as The Great Gatsby in the Baz Luhrmann remake.  Gershwin enriched Broadway and Hollywood musicals.  By 1926, Fred Astaire  and his sister, Adele Astaire, were stars of the Broadway and London stage thanks greatly to new showtunes written by George Gershwin.  The composer was one of Fred Astaire's dearest friends.  Astaire introduced his songs on Broadway and on film. 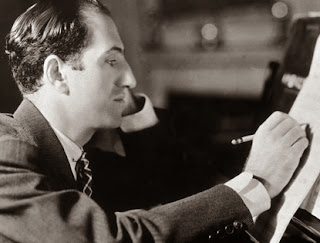 I know that a lot of young moviegoers think that last year's Les Misérables starring Hugh Jackman and Anne Hathaway was the best thing since sliced French bread, but they should also check out classic Hollywood musicals -- especially those original movie musicals starring Fred Astaire and Ginger Rogers.  Many of the standards they hear today came from those musicals. 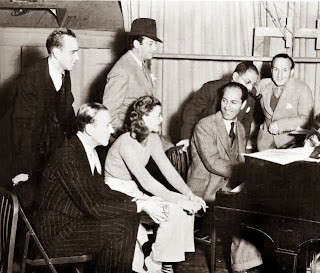 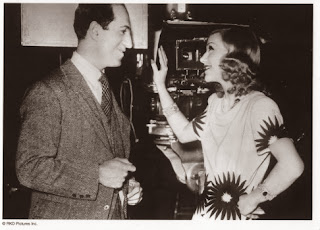 Shall We Dance presented Astaire and Rogers at their art deco apex.  It's shiny, it's sexy, it's swanky, it swings.  He appears to be a high-tone, famous Russian ballet star.  He's really a down-to-earth guy from Philadelphia who connects more to the influence of black music than he does to the rigid ballet.  She's a musical revue star who puts on airs to seem more sophisticated than she is.  She doesn't need to do that.  She's a working class girl who made good and that's good enough for us.  As usual,  Ginger's character is poised to marry an absolute dork until Fred's character dances her back to her senses.  For this story of "mask on top of camouflage," George Gershwin wrote a great score for Fred and Ginger.

The new songs they introduced in Shall We Dance included "They All Laughed," "Let's Call the Whole Thing Off" and "They Can't Take That Away From Me." 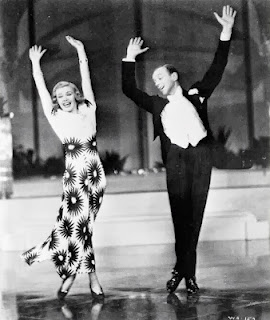 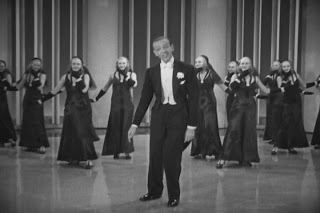 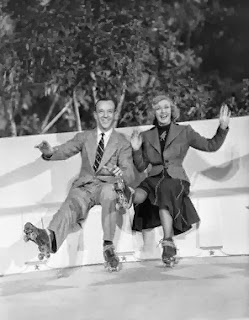 Musical comedies are hard work.  They're basically a triathlon with a downbeat.  You have to sing, dance and act.  Ginger Rogers and Fred Astaire were two of the hardest working people in Hollywood musicals.  Here they are, introducing the world to a new Gershwin tune in Shall We Dance:

Take that, Dancing with the Stars!  "They Can't Take That Away From Me" is my favorite song.  Astaire introduced it later in Shall We Dance when, through show biz and romantic complications, the two lead characters are prepared to divorce after a quick marriage of convenience for publicity purposes.  But he's really in love with her -- and she's starting to fall in love with him.  She's changed his life.  He wants to stay married.

Listen to Ginger sing the verse in "Let Call The Whole Things Off."  I have long felt that she was a little flat in the first line -- "The odds were a hundred to one against me...."

I think it's written that way on purpose.  She's flat to validate a later lyric in another song.  Listen to Fred's line in the ballad, "They Can't Take That Away From Me" -- "The way your smile just beams, the way you sing off key...."

Astaire and Rogers did not dance to "They Can't Take That Away From Me" in 1937's Shall We Dance.  But they did dance to it over 10 years later.  Their last RKO musical comedy was released in 1939.  Fred Astaire and Judy Garland were slated to star as The Barkleys of Broadway for MGM.  Garland had to bow out of the project.  She was replaced by Rogers.  For Ginger's 1949 reunion with Fred, and their first musical in color,  a big number planned for Judy was dropped and Gershwin's "They Can't Take That Away From Me" was added to the film.  The Barkleys are married Broadway musicals stars.  They've had hits together.  They've been known to bicker.  They're separated, on the brink of divorce, and she's now about to do her first drama.  She's usually been directed by her husband and co-star in light musicals.  Now she's reinventing herself in a drama directed by....you guessed it...a bit of a dork that she may marry after her divorce.  Her husband has fallen in love with her all over again and will dance her back to her senses in a Broadway benefit show.  Once again, Fred's character wants to stay married. 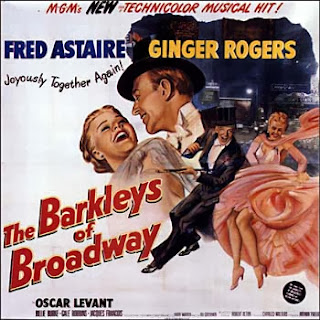 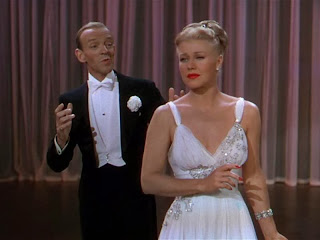 In some ways, The Barkleys of Broadway feels like a sequel to Shall We Dance.  In it, he's the more accomplished artist and she's the musical comedy star -- just like in the 1937 movie.  And what she is is good enough.  But Josh and Dinah Barkley are a married couple and, as happens, he's gotten so used to her as a wife that he has hasn't noticed her other talents as an actress.  They have to split up and fall in love all over again.  She has to discover her other talents and stand on her own as an actress.  He has to see those talents because they've often been slightly overshadowed by his.  The Barkleys of Broadway is a story of remarriage -- with a reprise of a great Gershwin tune.


George Gershwin did another original score for a Fred Astaire movie. A Damsel in Distress, also released in 1937, didn't star Ginger.  She and Fred took a break.  His leading lady was Joan Fontaine as the British lass an American performer falls for while in London.  Astaire's snappy dance partners in A Damsel in Distress were George Burns and Gracie Allen.  Gracie's two dance numbers were Astaire are a true delight.  She brought her daffy comedy persona gracefully into the numbers. 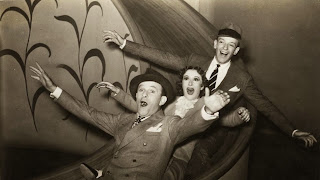 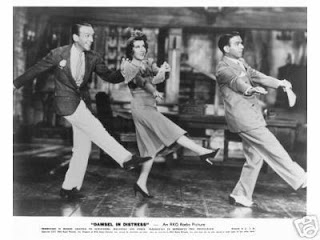 Gershwin wrote "A Foggy Day (in London Town)" for Fred to sing in A Damsel in Distress.  He also wrote this big hit, "Nice Work If You Can Get It."  Here's Astaire's pop record of it.


Fred Astaire's dance number to it was the highlight of A Damsel in Distress and allowed him to showcase his skills as a drummer.

George Gershwin got one Oscar nomination in his career.  "They Can't Take That Away From Me" from Shall We Dance was nominated for Best Song of 1937.  Nothing from A Damsel in Distress was nominated.  "They Can't Take That Away From Me" lost to a Hawaiian number called "Sweet Leilani" written for Bing Crosby to sing in one his Paramount musicals.  Which of those two songs are we still singing today?

As an Oscar-nominated song written for Mickey Rooney and Judy Garland in the early 1940s says, "I like a Gershwin tune, how about you?"
at September 26, 2013