I am listening to arguments in the Supreme Court for marriage equality.  Expect a historic week in modern American history.  This Hillary Clinton quote sums up how I feel. 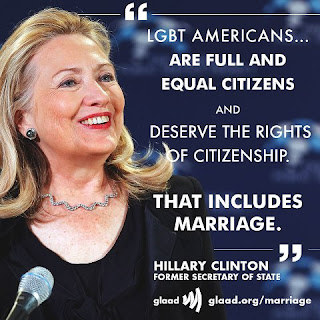 Sometimes major events in life call to mind a smaller experience in your personal experiences.  That's the case with me today.  We're hearing about the Constitution, civil rights, equality and heterosexual unions.  Back in the early 1990s, I knew a fellow who was a news segment producer at one of the senior three TV networks.  He went on to become a popular print/TV political news journalist.  He and his boyfriend were very much in love.  But the handsome Italian boyfriend was technically an illegal alien. Nowadays, when the topic on the seemingly endless parade of cable news talk shows turns to illegal aliens, you get the impression that the only non-citizens here in America are very brown Mexicans.  Wrong.  The boyfriend looked like the romantic lead in a classic Fellini movie.

In order to be with the person he loved, the TV segment producer arranged for a female friend and co-worker to marry his boyfriend, thus making him a citizen and keeping him from having to leave the country.  I'm not giving away a secret.  My late partner and I were two of the several people who attended the modest wedding ceremony.  Arrangements were made so the gay man would be able to hold the hand of his significant other here in the U.S.A. come New Year's Eve.

Meanwhile...the TV segment producer worked for a straight married network newsman.  He had a wife.  And kids.  And a girlfriend on the side.  He had candy delivered to the Mrs. and the girlfriend on Valentine's Day.

The segment producer went through a lot of work and procedure to be with the man he loved.  The network news star had a much easier time being with his wife.  And, apparently, with other women.  He had the benefit of more rights as a man in a heterosexual union.

Long before making arrangements for the Constitutional Convention, our Founding Fathers could not have seen this coming.  There wasn't a Ye Olde Gay Tavern in Philadelphia where Thomas Jefferson, John Adams and Alexander Hamilton could've dropped in for a quick stout and conversation with some of the patrons about their fundamental rights.

Yes.  This will be a busy, complicated and important week in our Supreme Court.