It was a top entertainment story of the week.  Jay Leno, host of The Tonight Show, has been ridiculing NBC executives in his opening monologues about behind-the-scenes network ratings and management drama.  NBC upper management has not found his jagged-edged jabs to be funny and asked the comedian to stop.  He didn't.  This ushered in show biz news reports that, when Leno's host contract with the network's famous show expires, he will be replaced. 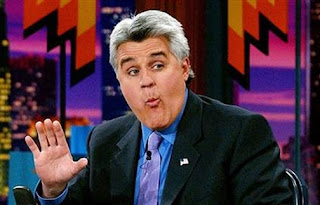 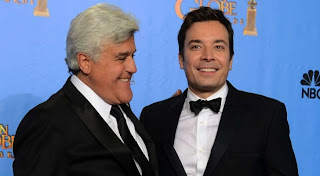 In the print and TV/radio reports about the NBC late night talk show host situation -- who could be moving up and coming in or who should be considered to come in -- here are the names I've read and heard mentioned by journalists: Jimmy Fallon, Seth Myers of Saturday Night Live, Stephen Colbert, Howard Stern and Craig Ferguson.

All talented.  All male.  All white.  Wow. This could be 1973 instead of 2013.  As a former night time national talk show host and as one who has covered show biz news, that's a story idea for an enterprising entertainment journalist.

NBC, CBS, ABC -- has a female or a person of color ever been considered to break new ground in that area of their late night programming?  And, if not, why not?  That's what I really want to know.  "Why not?"  Come on, press folks.  We're now in the 21st Century.

Here's a repost of a photo I love.  Johnny Carson, legendary host of The Tonight Show, was on vacation for a week and invited Harry Belafonte to be his fill-in host.  The year was 1968 and NBC's night time show still originated from 30 Rock studios in New York City.  Harry's very special guest one night -- Dr. Martin Luther King, Jr. 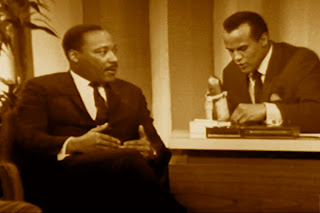 Two extremely famous and accomplished black people on that one show.  I don't think we've seen two minorities host late night entertainment talk shows on any of those three networks in all the years since that rare broadcast in February 1968.