I'm an uncle.  My two nephews are in the 9 to 12 age category.  One day, while we watched a clip of a certain action movie star on television, I said something that gave them both a case of slackjaw.  They looked at me with wide eyes and replied, "Really, Uncle Bobby?"  I had said, "Back in the 1980s, Bruce Willis had hair, he starred on a TV series...and he was funny."  Those were the days.  Before Die Hard movie stardom. 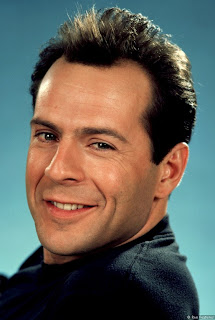 Early March in 1985, the series Moonlighting premiered on ABC.  Cybill Shepherd recharged her career doing snappy, rapid-fire banter opposite Willis.  It was banter inspired by the Cary Grant and Rosalind Russell rhythm in the 1940 classic, His Girl Friday.  She played ex-fashion model Maddie Hayes.  He was lovable, wisecracking detective David Addison.  Together, they ran the Blue Moon private detective agency in Los Angeles.  The two leads clicked, they had chemistry, the comedy made it "must-see" TV.  I can remember going to work the next day and hearing -- or often saying -- "Did you see Moonlighting last night?"  This show became one of my favorite 1980s TV series.  I really dug Bruce Willis' comedy skills.  I miss those Moonlighting days before his honest and warm grin turned into a post-Die Hard über-macho action movie star smirk.  When movie audiences made John McClane an action movie icon worthy of sequels, Willis seemed to tighten up and take himself too seriously.  He was excellent in the first Die Hard.  He had a touch of the David Addison looseness and humor we saw on ABC. 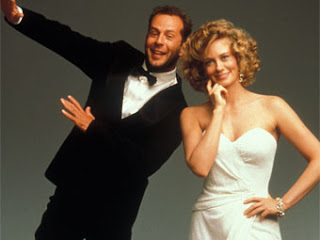 David was half goofus, half regular guy, a good friend and a really good detective.
The scripts were smart, surprising and ripe with pop culture references for babyboomers.  Willis became the new "It" dude of TV.  He was so entertaining to watch.  He even came up with a rock music alter ego.  As a veejay in the late '80s, I introduced his "Bruno Radolini" music video several times on VH1.  One of my favorite Moonlighting episodes was a valentine to the film noir crime classics -- like Double Indemnity and The Postman Always Rings Twice.  The episode, "The Dream Sequence Always Rings Twice," switches over to black and white....AND...Hollywood legend Orson Welles made a cameo appearance.  I loved the 1940s big band number Cybill Shepherd sang in that episode.  It included a hair salute to the former Mrs. Orson Welles -- Rita Hayworth, star of Gilda.
Moonlighting premiered this week in 1985.  We got 66 episodes.  I remained loyal to Maddie Hayes, David Addison and their secretary, Agnes DiPesto, for all five seasons. 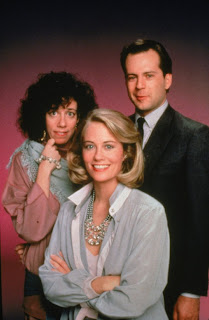 The quality and inventiveness of this hour-long weekly series made it a complicated production behind the scenes.  Throw network executive demands and actors' personalities into the mix.  We loved David and Maddie's bickering.  We could see their romantic attraction to each other even if they couldn't.  That gave the show a nice screwball comedy sexual tension.  Writers were stymied when they had to come up with a way to blend Cybill Shepherd's real life and increasingly obvious pregnancy into the scripts.  But they did it.  Good writers are a blessing.  Also, during the run of the ABC series, Willis shot his way to 1988 movie stardom in the first Die Hard tale.  The rest is box office history.  Except for the sequel released last month.  It died hard because it was killed by the critics.  I think Bruce Willis is now in production on Die Hard 6:  Get Me My Reading Glasses.  His vintage comedy charm graced last year's Moonrise Kingdom.   One day, I'll show Moonlighting episodes on DVD to my nephews.  I hope they dig the TV Bruce as much as I did.  This series, created by Glenn Gordon Caron, was a winner. 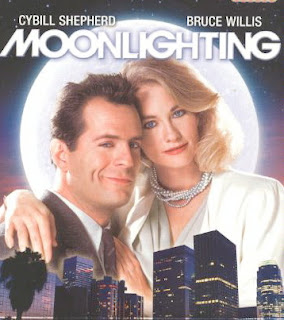